How does a tokamak work

TokamakSystem for magnetic plasma confinement, in which the magnetic field required for confinement is generated partly by external coils and partly by a strong toroidal plasma current. ›Tokamak‹ is an acronym from Russian toroidalnaya camera sz magnitnimi katuschkami, What toroidal chamber with magnetic field means. The tokamak is the world's leading type of experiment in fusion research (thermonuclear fusion). In a tokamak, a toroidal plasma is held together by a magnetic field that can be thought of as being composed of three parts: 1. One purely toroidal main field, which is built up by external coils and which gives the plasma its toroidal shape, 2. a purely poloidal field, which is generated by a strong toroidal plasma flow and which gives the magnetic field a rotational transformation that enables magnetohydrodynamic equilibrium, and 3. a vertical fieldwhich is also based on external coils and which prevents the plasma ring from expanding outwards.

In addition to the magnetic field, the tokamak principle also includes a somewhat unusual transformer whose secondary winding is formed by the plasma. There is no alternating current flowing through the primary windings, but a direct current that is slowly increased. This induces a toroidal edge voltage in the plasma, which has three important functions: firstly, it generates the plasma through a toroidal gas discharge from the neutral gas that was originally present, secondly, it drives the plasma current that is required for the poloidal magnetic field, and thirdly, it heats the plasma due to the power associated with the plasma flow.

Since this ohmic heating is not sufficient to reach the temperature at which the fusion fire can burn independently, additional methods of plasma heating are used. The inductive current drive must also be supplemented by additional processes with regard to a fusion power plant.

The tokamak principle was independently invented three times in the early 1950s, namely by the Soviet physicists Tamm and Sacharow, by the American Spitzer and by Arnulf Schlüter from Göttingen. After 15 years of experiments taking place almost exclusively in the Soviet Union, from the mid-70s of the 20th century intensively researched the physics of tokamak plasmas around the world, gradually approaching the declared goal of energy generation through nuclear fusion through ever higher plasma temperatures and larger tokamaks. Important experiments on this path were and are, among others, the European JET and the ITER, which is planned in global cooperation and is intended to demonstrate the technical feasibility of energy generation through nuclear fusion. 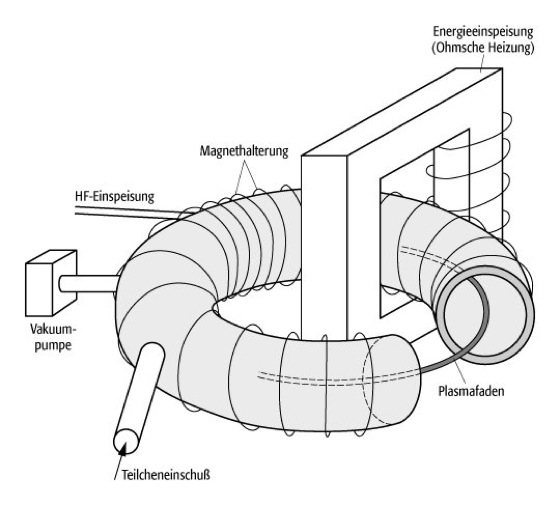