Which Pioneer mixer is the best

DJ club mixers usually have the feature that they are robustly built and have at least four input channels to connect CD media players and turntables. In addition, it is an advantage if they offer maximum connectivity and compatibility with frequently changing DJs. Especially with regard to DJs whose music comes from the laptop, e.g. an integrated audio interface can reduce the weight of the equipment bag a lot and prevent annoying cabling. We have therefore compiled a list of the best club mixers based on personal experience, information from dealers and the average requirements of a club mixer. This includes criteria such as workmanship, connection options, usability and, ultimately, the inner values ​​such as sound and output power.

Pioneer DJ's DJM series has been featured in most clubs for a long time. The DJM-900NXS2 is the youngest flagship of the Pioneer DJ club mixers. In comparison to the DJM-850, the sound quality of this digital 4-channel device has been increased again thanks to a 64-bit DSP. With revised frequency ranges for the 3-band EQ and a huge arsenal of effects on board, the DJM-900NXS2 offers a lot of possibilities to design a set. Ease of use is always in the foreground. In addition to the six sound color effects, there are fourteen other beate effects available, which are shown on an OLED display. These effects can be separated into certain frequency ranges. If you need additional effects, you can use either external effects devices via the send-return loop or, optionally, the RMX-1000 iPad app via USB as an additional effects device. The built-in 24 bit / 96 kHz USB sound card has four stereo inputs and five stereo outputs. This enables computer DJing with Traktor Pro, Serato DJ or Rekordbox DJ, including timecode control. Two USB ports are available for seamless DJ changes. A total of up to four turntables / CD media players can be connected. If you already have the larger CDJs or XDJs, you can also connect them digitally to the DJ club mixer. 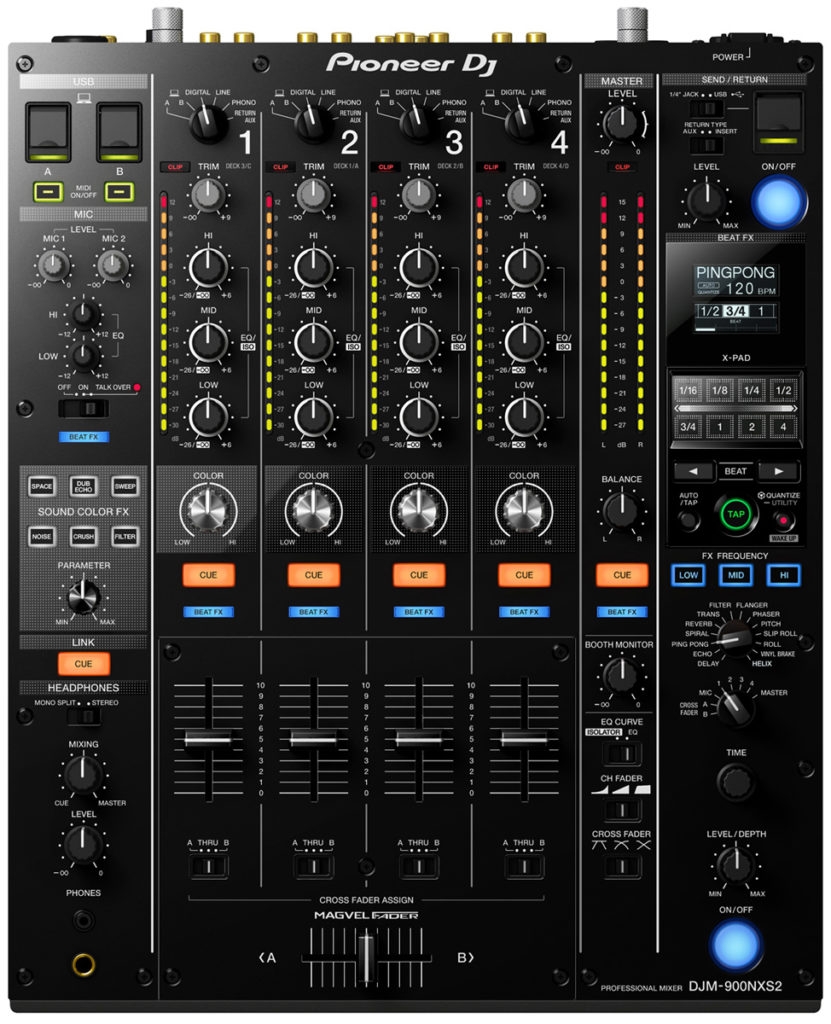 The surface of the DJM-900NXS2 is clearly structured so that you can find your way around quickly. The long LED chains for master and individual channels provide clear visual feedback on the level. The characteristics of the fader curves can be changed in 3 stages so that scratch DJs can also work with this DJ club mixer. The DJM-900NXS is an all-round mixer that combines digital and analog connectivity and, thanks to the onboard effects, offers plenty of scope for sound manipulation without losing clarity. Accordingly, every advanced DJ will find his way around immediately without having to read the operating instructions.

The Xone: 96 is an analog 6 + 2-channel mixer that can be seen as an update of the Xone: 92. The advantages of the Xone: 92 were retained and the weak points corrected. The layout of the Xone: 92 was largely adopted, so that Xone users will find their way around immediately. Probably the biggest change slumbering in the Xone: 96 is the dual 32 bit / 96 kHz sound card, which goes in and out with six stereo or twelve channels. It is tractor scratch ready from the factory. The double USB connection enables DJ changes on the fly via two laptops. Anyone who hangs up in the team will be happy about the second preview section, which enables a second DJ to cue independently. With two sends per channel and a total of four returns, the Xone: 96 DJ club mixer offers plenty of connection options for external effects devices, synths, drum machines or samplers. 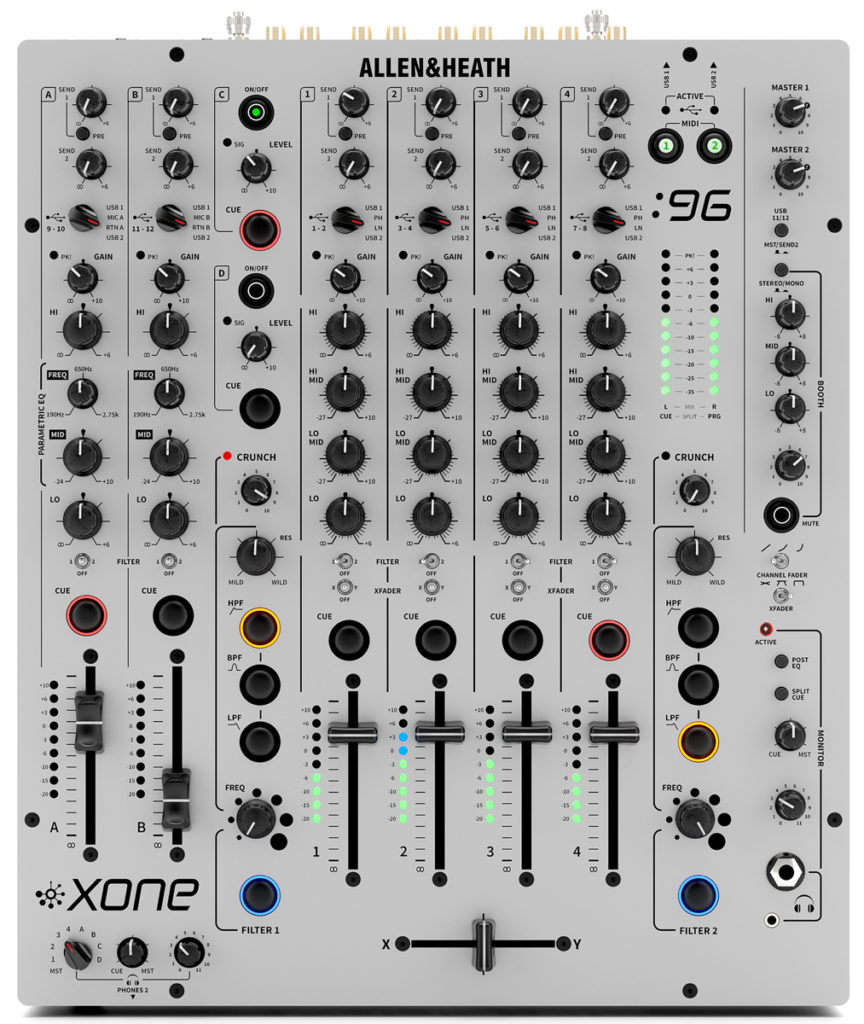 A revised 4-band EQ ensures precise intervention in the sound. There is even a parametric mid-EQ on the two return channels, which can optionally also be used as microphone channels. On top of that, the booth output also has a 3-band EQ. The well-known VCF filters of the Xone: 92 have been retained. They now also have a crunch control with which you can distort the signal harmoniously. The channel and crossfader curves are now adjustable over three levels. A mini innofader was installed as a crossfader, which can also be exchanged for the large innofader. Correspondingly, scratches are also possible with the crossfader. The strengths of the Xone: 96 lie in the extensive connection options for external devices, which makes it just as attractive for live sets as it is for Back2Back team DJing.

Furthermore, it has inherited the warm and powerful sound of the Xone: 92, which it now carries to the outside with even more headroom. Thanks to the 4-band EQ and the VCF filter, you can intervene precisely in the sound, but that doesn't necessarily make it easier to use. The double USB sound card offers many routing options, e.g. B. to play parallel with tractor and Ableton. In this sense, the Xone: 96 is mainly used for professional use, where it is possible to intervene in details like hardly any other DJ club mixer.

After the DJM-850 has had its day, the DJM-750MK2 is considered the little brother of the DJM-900NXS2. It can be seen as the cheaper 4-channel version in a slimmed-down form. Nevertheless, it is suitable for clubs and comes in a bundle with the Rekordbox DVS package. The internal USB sound card provides a 32-bit conversion for the digital connection. Unfortunately, with Traktor it only works without timecode support, with Serato DJ it doesn't work at all. Nevertheless, the DJM-750MK2 compensates for this with its processing in the style of the NXS series and the arsenal of effects in the usual Pioneer quality. Four sound color effects and eleven beate effects are offered here, which can be operated like with the big brother DJM-900NXS2. The display for the effect information is a bit smaller. In return, however, the 3-band frequency separation was adopted for the effect output. 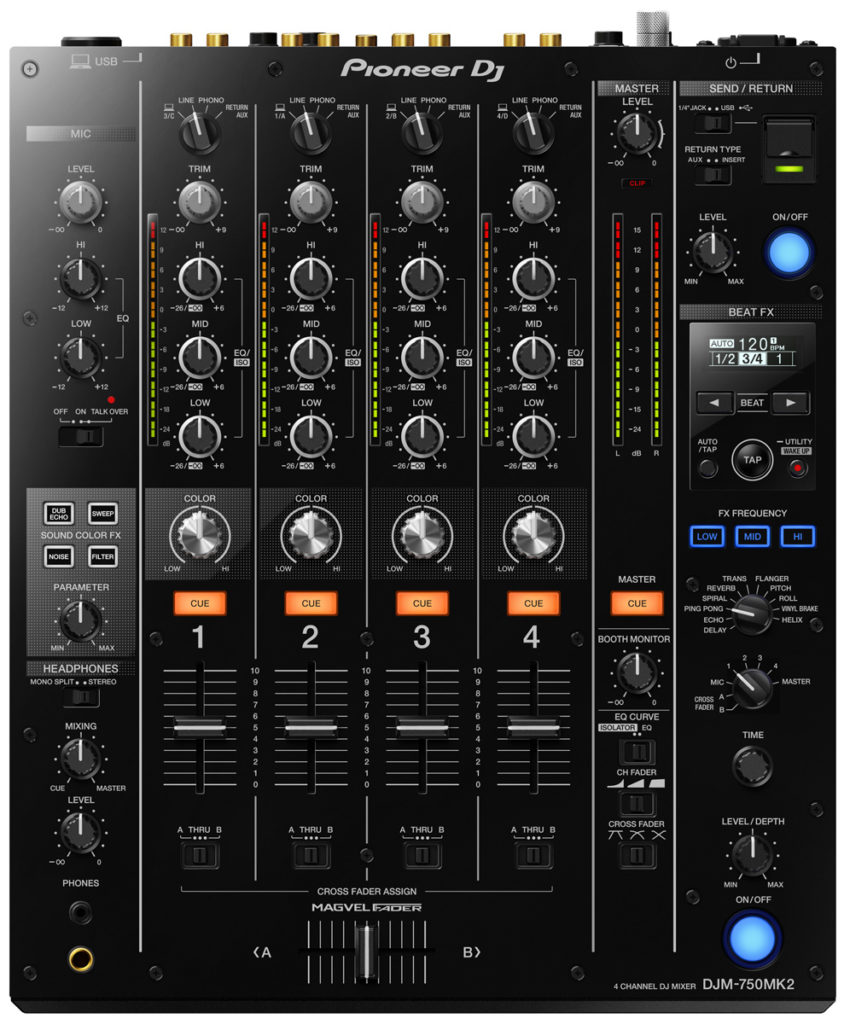 An effects loop for external effects devices is also available. Unfortunately, this works more like an insert loop than a send. In addition, the DJM-750MK2 also offers the USB connection for the RMX-1000 iPad app, which is an additional virtual effects device, so to speak. The USB port can also be used to record your mix directly on the mobile device with the Pioneer DJ DJM-Rec app. At around 1200 euros, the DJM-750MK2 is an alternative DJ club mixer with all the classic connections for turntables and CD media players. There are limitations with the simple sound card, which neither allows DJ changes nor is compatible with Serato and Traktor in DVS mode. DJs who are looking for a well-made club mixer for classic setups with simple operation will find what they are looking for with the DJM-750MK2.

With the appearance of the Denon DJ SC5000 media player, the DJ world became aware of a serious competitor for the Pioneer CDJs. The 4-channel Denon DJ X1800 mixer, which is also part of the Prime series, is used to tow this player and as a command center. The X1800 is a robustly built DJ club mixer, the layout of which is strongly reminiscent of the Pioneer mixers. However, there are clear differences. A bipolar filter and a controller for four sweep effects are available for each channel at the same time. There is also an effects board with twelve additional effects that can be controlled depending on the BPM and frequency. A special feature here is the instant button in combination with the touch strip, with which a macro function of effect control and switching on the effect can be combined. 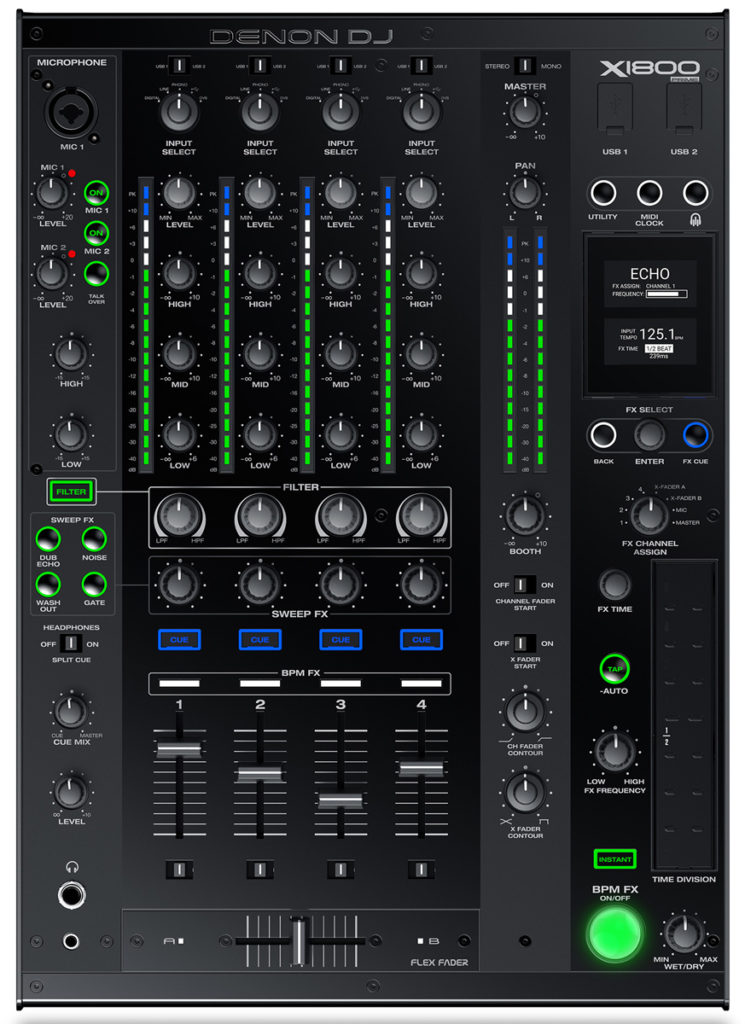 As a digital mixer, the X1800 offers a submenu that offers many more setting options. Among other things, you can choose the EQ type between classic and isolator, and also set the crossover frequencies for it. There is also the option of adjusting gain levels for microphone and headphones or the resonance of the filter or changing the channel routing. The X1800 has an internal 24 bit / 96 kHz sound card that is compatible with the Serato DVS package. Further DVS compatibilities are not given until further notice. Thanks to two USB ports, changing DJs is no problem. As a control center for up to four SC5000 players, digital connections are available on the back. There are four phono and four line sockets for the classic connection. All in all, the Denon DJ X1800 is a robust and clearly arranged mixer that has a lot of potential both visually and under the hood on a market where it doesn't have to hide behind the Pioneer mixers.

The Xone: PX5 is Allen & Heath's answer to Pioneer's easy-to-use DJM-NXS series. The analog 4 + 1 channel shows at first glance that the user interface is much tidier than with a Xone: 96 or a Xone: DB4. Accordingly, the PX5 has a simple 3-band EQ per channel and only one VCF filter system that can be routed to each channel. Even if the PX5 is an analog mixer, it cleverly combines the advantages of the analog and digital world. Above all, a Traktor Scratch certified audio interface with ten stereo channels and 24 bit / 96 kHz converters is installed, which can be connected to a computer via USB. Unfortunately, the Xone: PX5 cannot do Serato. An effect board with 16 effects was integrated for signal manipulation. These can be set in great detail, as you can control two other parameters in addition to the dry / wet parameters. 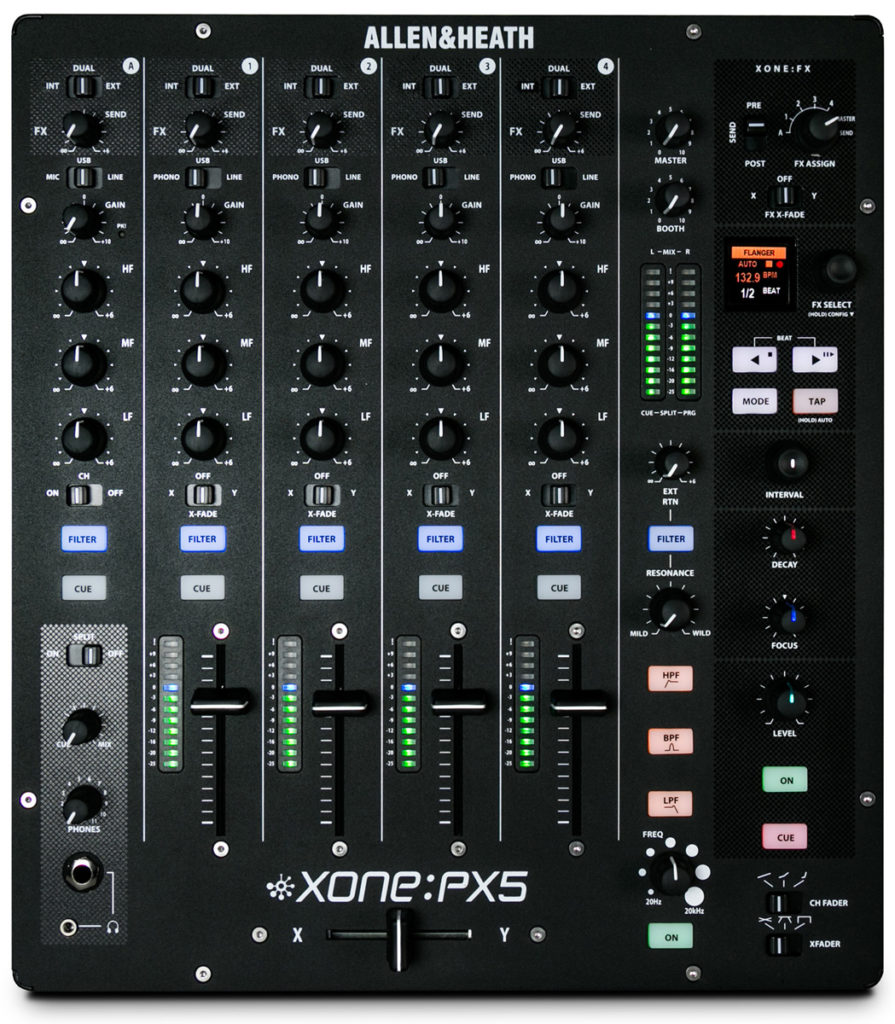 If that's not enough, you can integrate another effects device in parallel via the send / return loop. The VCF filter system as well as the pre- and post-fader circuit are possible in the effects loop, which results in further mixing techniques. The PX5 can be seen as an inexpensive club mixer that is easy to use and delivers the signature Allen & Heath analog sound. It also has sophisticated connectivity for MIDI devices such as K-series controllers, effects, synths or drum machines, which can be kept in sync with the PX5. The onboard effects can be described as "smooth" rather than "in-your-face", which underlines Allen & Heath's history in the studio area.