Which country offers the most lavish lifestyle

More than just the population

The projection developed by Hennig can of course show more than just population data: The researcher used the grid transformation to show, for example, the amount of precipitation over the course of the year. Enlarged grid areas clearly show where on earth it rains most at a certain time of the year. 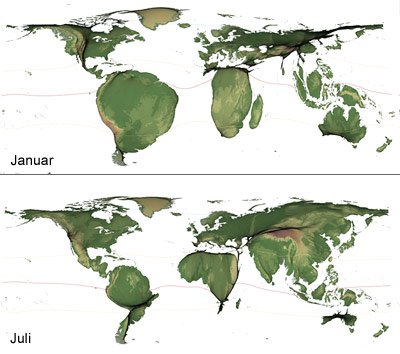 Another application example is the impact of humans on the planet in the form of the ecological footprint. On a normal map of the world, coded solely by colors, this is hardly meaningful, since the size of a country says little about the number of people who represent the lifestyle represented in this way.

Lifestyle and number of people

If you change your perspective and visualize the same generalized data from the point of view of population distribution, you get a different, albeit still only partially meaningful picture. This is because regions with many inhabitants such as China or India appear overrepresented, although their share of resource consumption per capita is significantly lower than in the USA or Germany, for example. The lavish lifestyle of these more affluent regions does not appear to be problematic because relatively few people live like this.

However, the map clearly shows how many people each have a particular lifestyle. This gives an idea of ​​the problems that would arise if, for example, a lavish lifestyle were also lived in the heavily populated regions of the world without new sustainability concepts being developed for a rising standard of living. 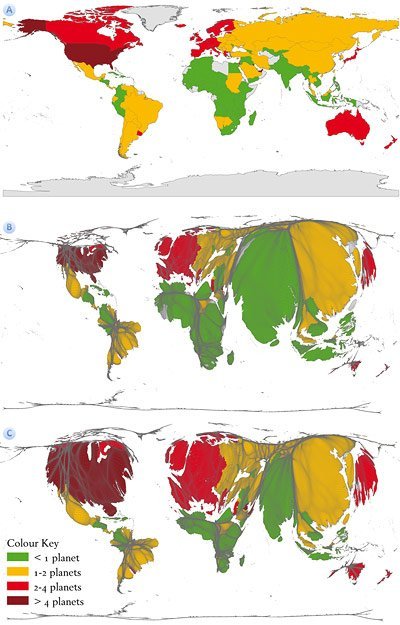 Yet another picture emerges if one converts the ecological footprint into its real quantitative extent. So if you show how many resources each person uses in a certain area and use this as the basis of the raster transformation. Then it becomes clear how wasteful the lifestyle of the few wealthy nations is compared to the poorer regions, and what extreme inequalities this results on a global level.

The well-known satellite image representation of the earth at night shows more than just the population distribution. Because it is less a picture of the most densely populated areas of the earth, but rather highlights the places where people can afford to illuminate the night sky with light. The same satellite image, transformed according to a population projection, shows a different reality: a reality in which many people in Africa, Asia and South America live in darkness.