Why is Spock crying

Discovery Review: Unification "III" with Spock is a cheeky presumption 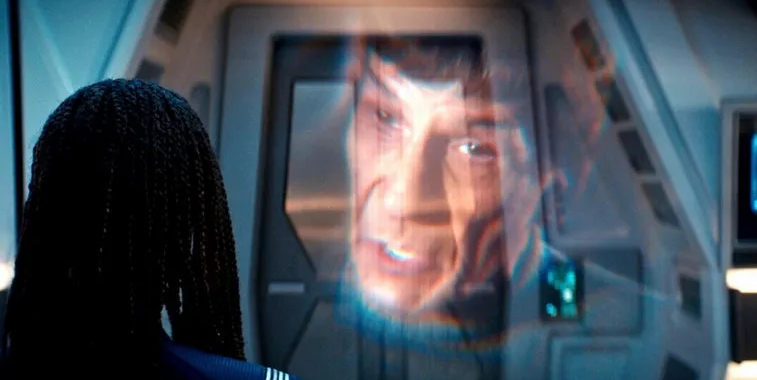 Star Trek: Discovery isn't just stupid - it makes you stupid. The disguised TNG dismantling unification or reunification "III" could not be clearer in this regard. Even Leonard Nimoy's Spock dug up Kurtzman for a tearful freak show. My review after several weeks of an STD break.

Does the Kurtzman confused person really ruminate on this pattern every Friday? The authors present us with a conflict that has been smoldering for centuries, and the Sublime solves it with one of her tearful dramas:

- Federation still only knows the Dilithium-controlled warp drive, although alternatives are already in the works in TNG, but Burnham is bringing the 1,000 year old key.

- The earth cannot look through the telescope and recognize its own spaceships, Titan residents (remember: Jupiter's moon!) Have never heard the word funk for their part - Georgiou pulls down his helmet and Burnham declares war over.

- The Federation and Starfleet have been hiding in the bunker for 120 years, remaining in the dark as a military cartoon, while Burnham casually clears up the mystery of the century fire.

- The Trill are unaware of the ability of the symbionts they have cherished and adored for millennia to fuse with other species. Burnham does, of course.

- And now this episode: Romulans and Vulcans live together on a volcano that has been renamed "Ni’var", but in spirit they are still not best friends. The Federation is despised. Both cling to crude conspiracy theories and want to keep findings about the fire to themselves. But Burnham yells and speaks in front of an audience, actually trying to convince a logic committee, confused: the conflict is over.

Life without Burnham is possible, but pointless

To top it off, the talent exempted from Alex Kurtzman underline that Spock would have remained mentally handicapped without the godlike who accompanied him at most five percent of his life. Suddenly, curiously, they all know everyone again. Know exactly what she's done great. Martin Luther, Immanuel Kant, Charles Darwin, Sigmund Freud, Albert Einstein, Anne Frank and finally, as the crown of creation: Michael Burnham.

Their existence had been declared a secret in order to patch conflicts with the canon. 1,000 years later, it no longer played a role in a comprehensible series, whether on record or not. As is well known, there was never a hero cult around Bismarck's sister. And the unification of the Germans that went back to him is only a mere 149 years behind us.

Isn't it embarrassing for the supporting actors to exclusively worship Burnham and their loved ones in their roles and to throw keywords at them? Otherwise they have zero profile. And isn't SMQ ashamed of her acting? If she were ten years older, I would assume that her eyes and mouth open so theatrically because Botox has robbed her of fine motor skills. But even a facial accident whimpering for roles should not be part of Kurtzman’s dialogues. Everyone has a minimum of dignity.

Cut Leonard Nimoy in there - what a presumption. It is strange, by the way, that Picard records dialogues with other people and then reassembles them as the "best of". To call the window paste "Unification III" ... uff! Kurtzman's hubris probably knows no bounds. Anyone who has watched the two-parter before will experience the greatest contrast of their life.

You know who is responsible. That is why I do not ask in conclusion how, rather: Why could Star Trek fall that low? Did we let that happen in silence? Discovery, Unification, Spock ... pah! It's time for the Klingon pain sticks. Pitchforks work too, of course.