What is melting point

The melting point is the characteristic temperature at which a substance changes from a solid to a liquid state. There is a balance of solid and liquid.

The melting point is a characteristic temperature at which a substance changes from a solid to a liquid state of aggregation. At this temperature solid and liquid are in equilibrium. A typical example is ice, which melts at 0 ° C and becomes liquid water. The melting point is slightly dependent on the air pressure, which is why a pressure specification is required.

It can be influenced by the addition of other substances and impurities. For example, the melting point of ice is lowered by sodium chloride or ethanol. One speaks of a lowering of the melting point.

Many substances decompose or burn when heated, for example organic molecules such as sugar (sucrose). Some also go directly into the gas phase (sublimation). Mixtures of substances such as natural substances (e.g. waxes, fats) melt in a certain temperature range and not at a defined temperature.

The melting point often, but not always, coincides with the freezing point (freezing point). Some liquids can be supercooled and, for example, solidify in seconds on contact with a crystallization nucleus (“supercooling”).

The melting point is higher, the stronger the binding forces between the particles or molecules in the solid. For example, sodium chloride (table salt) has a high melting point of 801 ° C due to the strong ionic bonds in the crystal. Water has a lower melting point because the strength of the intermolecular interactions (hydrogen bonds) is lower. 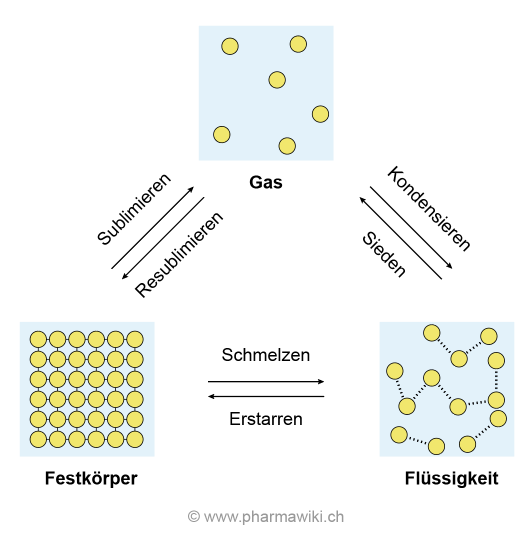 The melting point is used, among other things, in analysis, for identification, characterization and for quality assurance.

Support PharmaWiki with a donation!

© PharmaWiki 2007-2021 - PharmaWiki provides independent and reliable information about medication and health.
This article was last changed on 10/24/2020.
Imprint and data protection declaration
Show products for this page
<?