How effective would a lightning strike be

Died in November 1932 Rector Wilhelm Klewer, just a few days before Martin's Eve. Until shortly before his death he had been working on a manuscript in which he wanted to share his research on the Mülheim Martinslied with his "Plattdütschen Kringk". The "Mülheimer Zeitung" printed it in large parts on November 10, 1932 and concluded with the words: 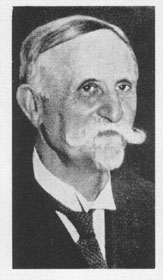 As early as 1909, Klewer had presented old rhymes, riddles and sayings in the commemorative publication for the Rhenish teachers' conference in Mülheim under the title "From Children's Life". His primary concern was to preserve customs by reviving them. He personally designed the annual Chrubbel-Chrabbel of the civil society Mausefalle, at which the children are given presents, and he founded the "Plattdütschen Kringk" on October 28th, 1930 in order to preserve the local dialect.

As a non-native Mülheimer, I only got to know the Vögelsche song from the VHS sheets of the Mölmsch-Platt-Kreis, which Ernst Buchloh had compiled and edited in the 1970s. In it he adopted Klewer's attempts to interpret the central question: "Wän üs dat Sinter Mätes Vügelsche?" For a long time I believed that the somewhat dubious bird in connection with the Martin legend was a typical Mülheim rogue. I was already used to a lot from Bonn, where St. Martin in the Schnörz song gives everyone a candle and lights them personally. And I regretted the Mülheim children, who probably had to sing at least twice the number of lines before they could finally receive the longed-for gifts. The parts of the text seemed to me to be of dramaturgical importance and consistency.

Klewer writes that the Duisburgers sing "Kögelsche" instead of "Kapögelsche", but he gives the impression that he only sees a falsification of the Mülheim original. Questions to old Mülheimers unfortunately did not provide any further information on the supraregional distribution. The institute "Deutsches Volksliedarchiv" in Freiburg had done an invaluable service in obtaining the original melodies for Mülheimer Bürgerlied texts (see the article "Us Mölm, dat wille we-i lowe" in the Mülheim Yearbook 2002). I shared my suspicions with him.

And indeed, not only one bird flew in: "Hei, Sünder Mertens vöügelchen" from Lower Saxony, "Sünte Martins Vögelken" and "Sünnematten Flüggelken" from Westphalia, "Matten, Matten, Kögeling" from the Altmark and "Kipp, Kapp "Kögel, Sünter Martens birds" from East Friesland were just a few of the predominantly red-clad flock. Heinrich Sints had already collected and evaluated them at the institute in 1968.

We do not know exactly what scientific material was available to Rector Klewer. He himself only mentions the historical atlas by Professor Aubin from Bonn, about the spread of the Martin fire. But as early as 1910, Wilhelm Jürgensen had submitted an idiosyncratic but systematic study of Matins songs. In 1931 Hans Wagner wrote a dissertation on the subject and published it as a book in 1933, one year after Klewer's death.

The Mülheim text is printed in full. And as suspected, there are documents for all 8 parts from Holland to Westphalia, from East Frisia to the Eifel. Well. But who is the "Sinter Mätes Vügelsche", to remind you of Klewer's central question?

What does the Martin's bird with the red cap or collar or skirt or wing have to do with St. Martin? As a poultry that is vouched for in legends and customs, only the goose makes sense. But Klewer rightly excludes that. She has neither a cap nor a collar. It is also clear to him that the roots of these lines go back to the time before Christianization. Although he cannot find a suitable bird from Germanic mythology, he does not want to leave the question open. There is a bird that bears the name Martinsvogel, the hen harrier, which flies out at dusk when the children are singing outside the front doors. 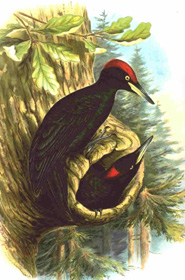 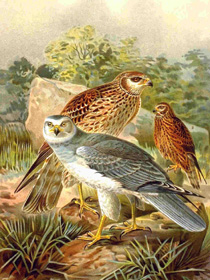 The bird of prey has a wreath of red-brown feathers on its neck. This is the "roat Kapügelsche". - Of course he contradicts himself here. But in Mülheim this interpretation has remained in people's minds to this day. As far as I know, there is no second researcher on tradition who supports this thesis. Because even a cursory glance at the pictures convinces everyone that the black woodpecker rather than the hen harrier could be meant. According to Wagner, the red-hooded black woodpecker on the Lower Rhine is in fact understood by Martin's bird, in other areas no specific bird can be assigned. Therefore, Jürgensen took the view that it could perhaps be a manifestation of St. Martin. "Quite apart from the fact that this explanation is far too abstract for popular thinking, the arguments given by Jürgensen also seem less than plausible. Let us rather assume that the red-hooded black woodpecker is to be understood under the Martin's bird! We know that this one Vogel (Picus Martius Fernoniusque) was regarded by the Sabines and Italians as a lightning bearer. "(Wagner quote) The black woodpecker also appears in Germanic popular belief as a lightning bearer and fire bringer. From this it can be seen what the "Vogelsche" originally had to do with St. Martin. Nothing! The symbolic bird may only have become the Martinsvogel through the traditional fire. By the way, our song belongs to the age-old hailing songs (heischen = to ask, to demand), with which the children beg their part at different times of the year. "Mätes", mixed but not congruent with the Germanic Thanksgiving, is just one occasion among many.

The melody, too, has been functionally oriented towards this one goal of demanding since time immemorial. It moves in the simplest, three to five-tone space. The spoken chant dominates on a single pitch. Anyone who criticizes the Mülheimer Lied because of its litany-like melody and wants to pimp it musically - admittedly, I was one of them - must learn that the Heische- or Ansingelieder were not intended as musical enjoyment, but as just as "child's play" (one is often called upon "Hoppe-hoppe-Reiter" reminds us) like a loud demonstration of a concern. The length of the Mülheim text, which is also noticeable in a national comparison, seems to me to be calculated from this point of view: Who wouldn't want to give the children who had sung this song to the end plenty of gifts?

Text and melody, which one learns only gradually when dealing with folk customs, are always only snapshots of a flowing development in a certain place at a certain time, fixed by a subjectively sensitive author with insufficient means. The printed music version follows on the one hand the oldest transmitted Mülheim manuscript, on the other hand shows a few eighth notes for the changing text, in which "se" (se pack, se sall) is often inserted in some places. But even this adapted version does not have to correspond exactly to what the children really sang and sing. Folk songs were used for centuries orally passed on. There is consequently no original, no right or wrong version; they are all just versions of an element of living customs.

We have printed the text under the notes in a notation that is only used in our present time as more appropriate to the actual sound of speech. There is nothing binding in this area either. The text is deliberately reproduced in two versions, which differ only slightly in the word stock but clearly in the representation of the Mölmsch through high German letters. The document taught by the Mölmsch-Platt-Kreis is the only exact "phonetic transcription" of dialect with normal letters, but does not manage entirely without special characters. It is found to be too complicated for general use.

How the oral tradition leads to changes can be seen within the borders of Mülheim. The lines "Hie van do noo Äässer, hoaln en fat paleness, hie vöar, do föar, vöar de riieke Koupmannsdöar" and "teegent Joor wiier wat" are not sung by many Saar people. While the omission in the first case is not noticeable musically, the omission of the second position is noticeable as a truncation of a melody phrase, but this does not prevent anyone from doing it because it was passed on at school or at home at a certain time. The Saar people never went to the cattle market in Essen to buy a fat cow, one hears as the reason for the reduction, which the children certainly welcome. But maybe it was just forgetfulness? Because that would also be a functioning tradition: something is left out, something is added, etc.

Conclusion:
"Ssinter Mätes Vögelsche", the Mülheim Martin song, it became clear, is not a Mülheim home-grown product. The text does not reflect the dramaturgy of "Chrubbel-Chrabbel", but represents a historical sequence of text parts that are widely used.

It is quite possible that the beggar song came to us from Holland. In purely Catholic areas, on the other hand, the first lines relating to the little bird seem to have died out. This embedding in a history of folk custom, which goes back to the German era and in which we participate through our Mülheim version, makes it a valuable cultural heritage. But it also takes our duty to continue the tradition. And that's not exactly the best.

A generation after Rector Klewer, his efforts threaten to become ineffective. The Chrubbel-Chrabbel, which the civil society "Mausefalle" thankfully still organizes, is no longer enough on its own. There the song has to be sung to the children and parents, who meanwhile wait silently for the candy.

In 2001 the Mölmsch-Platt regulars' table "Aul Ssaan" visited all primary schools in Saarland, explained the text in the classes and sang it with students and teachers. Polite interest was expected, but enthusiasm was everywhere. "Mölmsch at school" is obviously fun!