Do you wish you were completely invulnerable

Symptoms of stress that you should definitely watch out for

5 before burnout or 12 stress symptoms that you should definitely pay attention to!

In a company in Hamburg: Karl Müller * from the project office works around twelve hours a day. He feels completely burned out and exhausted. 'But only the tough come into the garden,' he thinks to himself and continues as usual without paying attention to the symptoms of stress.

His colleague Frida Hansen * is urgently looking for a daycare place for her three-year-old daughter and in the meantime doesn't know how to balance work and family life.

This question no longer arises for colleague John Petersen * from the accounting department: After months of major marital problems, his wife recently moved out with their three children and she wants to get a divorce. Petersen has found no rest since then. He can no longer sleep, has lost weight, his thoughts only revolve around the separation ...

These are all private matters for employees, aren't they? The answer is: by no means!

(* Place and name are fictitious by the author)

"Any private problems" prevent concentrated work. Personal problems of employees can quickly turn into personnel problems for the company.

But every illness has its history and it is the same with permanent states of exhaustion and burnout. Widespread states of exhaustion already occurred during industrialization. At a time when living and working conditions - similar to today - were in a serious process of change. The term burn-out first appeared in the mid-1970s; Back then in the context of frequent exhaustion in social professions. The American psychoanalyst Herbert Freudenberger described the syndrome as a result of excessive stress in work areas with high emotional stress.

Bringing the topic of health into harmony with daily requirements is usually a difficult balancing act, especially for people in positions of responsibility, i.e. for managers and the self-employed. It is all the more important to deal with sources of stress and prevention options in a differentiated manner.

As I said: permanent stress or burnout do not come overnight, but are a gradual process. We'll take a closer look at this in this post. 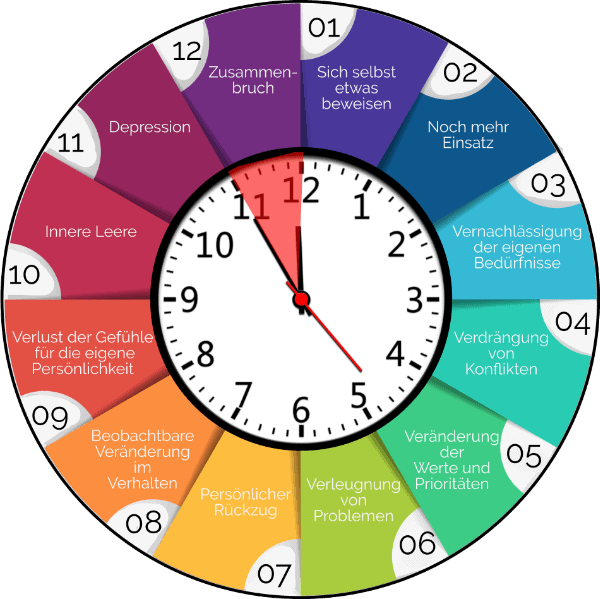 Do you remember Karl Müller (if not, please see above) from the project office? When Karl signed his employment contract at the company, he thought he had found his dream job. A job with a lot of freedom of action and decision-making. In addition to the exceptionally good pay, there were also brilliant career opportunities in prospect. So, highly motivated, he plunged into the specialist literature, attended seminars and was always at the forefront when it came to work. He always had new ideas, never missed a meeting and was fully committed to the company. Of course, he received a lot of praise from his superiors for his extraordinary commitment. Don't blame me, but I'll bet you and I would be just like that. 🙂

Stress symptoms In this phase: You feel great, full of energy and highly motivated.

Phase 2: I am invulnerable!

All of Karl's efforts had paid off. He has been proposed to lead a very important project. Wow! He had shown everyone what he was made of and left the "wimps" of internal competitors far behind. He was so happy, proud and satisfied with himself. He even felt that his success was somehow sexually attractive to the opposite sex. He wanted more! More recognition, more power, more money, more knowledge, more influence - more, more ...

The reward center in his brain was running at full speed and it seemed insatiable.

Stress symptoms in this phase: You feel great and you are at the height of success.

Phase 3: I am needed everywhere!

Karl found recognition everywhere. Not only with superiors and colleagues, but also with friends and family. Everything went like clockwork and life in the fast lane could go on forever. Resting or doing nothing is only for losers. That is why he was always available during his vacation with the family. And when the phone didn't ring, he called his colleagues to find out about news and the current project status. In addition to increased coffee consumption and sometimes a good glass of wine (or two) to relax, everything went well. His life consisted only of activities related to work, including leisure. But that's the way it is when you are indispensable.

Stress symptoms in this phase: You enjoy your many obligations and the feeling of being indispensable and needed everywhere.

Oh, life could be so good if it weren't always for the nagging of his wife and children. Again and again they accuse Karl of lack of interest in the family and feel that they are not properly understood. And all because he didn't make it to his son's soccer game on time. If they only knew what a high-flyer like Karl has to do. His friends have long since withdrawn and swapped places with colleagues and business partners. Annoyed, Karl withdrew more and more into his work, because here he still got the desired recognition. But even here he reacted increasingly irritated when something did not meet his expectations.

Symptoms in this phase: You react increasingly irritated to your environment and show little understanding for the concerns of your fellow human beings.

Phase 5: For me, only top performance counts!

Mediocrity is a reason to be ashamed! This saying was framed on Karl's desk. Only one thing counted for him: top performance! That's why he didn't feel like having endless discussions with his wife and children. For all these little things his precious time was really a shame. He preferred to spend his weekends in the office. Here at least he had his peace and quiet and was not disturbed by the playing children. Oh yes ... The little careless mistakes that happened lately were perfectly normal with the workload. And the sleep disorders? 'Well, what are sleeping pills for,' thought Karl. Why should such a kid's stuff affect his performance? After all, he is Karl Müller, the epitome of high performance personified. And all the whimpers with their little problems should be ashamed of themselves. No wonder they weren't making any headway.

Stress symptoms in this phase: You feel like the doer and infallible. Your vocabulary towards others tends to become more and more disregarded.

Karl experienced his environment more and more as a kind of theater of war. You couldn't afford to make any mistakes here. When others made mistakes, they had to be tough and show strength. No wonder he got his first physical problems during this time. In addition to the constant tiredness, he struggled with headaches more and more often. His body weight also changed dramatically due to the unhealthy diet. His colleagues saw him as an impatient, bad-tempered and intolerant person. But Karl still worked well and was able to maintain his usual performance through experience, routine and an extremely large amount of overtime.

Stress symptoms in this phase: You feel a kind of helplessness rise in you and in quiet moments a feeling of intangible fear spreads.

Karl Müller sat trembling behind his desk. He had just out of the blue berated and yelled at his colleague John Petersen, so that other colleagues had to intervene. Actually, he was dissatisfied with himself, because he felt his performance drop, and his nerves were on edge. Especially since his wife and the children had moved to live with their parents. For the first time, Karl felt very insecure. More and more often he tried to escape the internal pressure with the help of alcohol. Despite the occasional panic attack, Karl blocked social contacts. What should the others think of him if he admitted weaknesses? Impossible! Perhaps a short-term vacation would be the solution to his problems?

Symptoms in this phase: You can feel that your performance is dwindling and that you are struggling with concentration problems, but you mobilize all your reserves so as not to show this.

Phase 8: I can get it under control again!

Unfortunately, the short-term vacation did not bring the desired relaxation. Karl had the feeling that his internal battery was not even remotely charged. But he was obsessed with showing the world what a great maker he was. This daily drama cost him a lot of strength and energy. Everyone had long since noticed that Karl's performance had noticeably deteriorated, he made mistakes and often reacted inappropriately irritably to questions. He ignored benevolent hints and even perceived them as a threat.

Stress symptoms In this phase: You constantly feel overwhelmed, but still hold on to the conviction that you must not let up and that everything will come back to normal.

Where was Karl's former identity and values? His family life no longer existed. It was a long time since he was a person full of vitality and energy. Karl felt that his life was slipping out of his fingers and that he could not control it. A fear spread through him and he was basically no longer able to work and should have been treated by a specialist.

Stress symptoms in this phase: You feel infinitely tired and anxious. The world is becoming increasingly bleak and gray.

Just getting up in the morning, washing and brushing teeth cost Karl an infinite amount of energy. He felt empty inside and trapped in a hamster wheel. Somehow he didn't care. He had not seen a challenge in his job for a long time. In order to feel anything at all, he threw himself into a senseless adventure every now and then, but the inner emptiness had him firmly under control.

Stress symptoms in this phase: You feel empty and numb inside.

Phase 11: I fall into the deep black hole.

Karl was desperate and saw no more meaning in life. Why also? He had lost everything! More and more often he was haunted by thoughts of suicide.

Stress symptoms in this phase: You feel lost and consider your situation to be absolutely hopeless. In addition, you are dealing with suicidal thoughts more and more often.

Thank goodness Karl Müller was not given up by his environment and was admitted to a psychiatric clinic. It took him months to recover to the point where he was even eligible for therapy. Many more months passed before he could be brought back to work.

Today Karl Müller has learned to recognize his limits and to take better care of himself. He is leading a happy life with his family again and is more successful than ever professionally.

Do these stress symptoms only apply to managers?

Of course, this is only one example of how the different burnout phases could take place. They could also overlap or be skipped over. It has to be Not always be the highly motivated manager type who burns out. It can just as well affect teachers, employees or students: basically anyone who does not accept their own limits and does not take countermeasures in time.

I wish you a relaxed time