Are English German and Dutch white

Among the relatives of German, Dutch, the direct north-western neighbor language, is closest to him, while English and Frisian are only added secondarily due to their common South or West Germanic origins. Even further away are the Scandinavian languages ​​on a North Germanic basis, furthermore the extinct East Germanic languages ​​of the Goths, Burgundians and Vandals in late antiquity and the early Middle Ages. This results in a family-linguistic structure in which Dutch takes the place of the sister when viewed from German, English and Frisian are more like cousins ​​or bases and the other Germanic languages ​​are to be assigned to the third degree of kinship. A subsidiary language of Dutch that is primarily to be understood in terms of colonial or settlement history is Afrikaans in South Africa, where the Dutch language of the Boers mixed with local elements and greatly simplified the structure of the language.

But what does Dutch mean? In modern times, this term is used to describe an independent Germanic language on the lower reaches and in the estuaries of the rivers Schelde, Maas and Rhine (with its branches Nederrijn, Oude Rijn, Lek and Waal). Further north-east there is the area of ​​the IJssel and the Vecht, old tributaries of the former Zuiderzee (Dutch for southern sea), the North Sea bay that the Dutch closed off from 1927 to 1932 for land reclamation; the large remaining lake is the IJsselmeer.

Accordingly, Dutch makes up the majority of the written and vernacular languages ​​in the bilingual Kingdom of the Netherlands with 90 percent (where it is the state language; Frisian is also common in the province of Friesland in the north) and with 55 percent in the trilingual Kingdom of Belgium (alongside French in the south and Southeast and German in the Far East). But its spread as a - admittedly declining - folk idiom extends along the North Sea coast and inland to the area between Dunkirk and Lille in the French departments of Nord and Pas-de-Calais, where the area name Flandre (French form for Flanders) still applies.

This results in a supranational community of around 20 million speakers who belong to different denominations. In the south there are the Catholic Flemings in Belgium and many southern Dutch people in the neighboring provinces of Zeeland, Holland, Noord-Brabant and Limburg, while the north is predominantly Protestant, but fanned out into various church communities - including Calvinists in particular; significant Jewish communities can be found in the trading cities, especially in the north. The language background is therefore quite diverse and also shaped by the social components of the peasantry, the canal and lock builders, the fishermen and seafarers as well as the bourgeois traders who once experienced colonialism. In the present, this social structure is of course overarched by an emphatically modern and language-leveling industrial society, including its highly intensive, export-oriented agriculture.

Something similar results from our language experience with Dutch today: A certain cosiness has been preserved despite all the striving for cosmopolitanism - earlier more towards France and overseas, now more towards England and the United States - even in the rather relaxed standard language . This is guaranteed not least by the many diminutives, which are used just as often as in Middle High German or in today's Swiss German as well as in Bavarian.

The origin and further history of Dutch are quite complex; they can be outlined as follows: Since the early Middle Ages, there was a newly grown language community of North Sea Germanic-Frisian, inland-Lower Saxony and Lower Rhine-Franconian tribal dialects. It had established itself for the first time comprehensively in the Middle Dutch language level of the High and Late Middle Ages as an independent Southwest Germanic language unit in an intermediate position between High German, Low German, Frisian and English. As a result of the wars of freedom in the early modern period with the establishment of the Republic of the United Netherlands in 1581, which was recognized in the Peace of Westphalia in 1648, a distinct development of the written language, independent of German, took shape.

In fact, Dutch also has a sequence of historical stages comparable to the neighboring Germanic languages:

- Old Dutch (Oudnederlands) from the 9th to the 12th century,

- Middle Dutch (Middelnederlands) from the end of the 12th century to around 1500, called dietsch or duutsch in the Middle Ages, which etymologically (like "German") means "vernacular", and

- Nine Dutch (Nederlands), since the 16th century initially with a northern focus, therefore also called Dutch (whereas English Dutch is derived from the central Dutch duutsch), with regard to the written language since around 1900 called Algemeen Beschaafd ("cultivated") Nederlands.

If the spatial-dialectal component is included, then Flemish (Vlaams) is an umbrella term for the Dutch language in Belgium, i.e. the mother tongue of the Flemings, in contrast to the French of the Walloons. But in a narrower sense, Flemish also means part of the southern Dutch dialects in the Belgian provinces of West and East Flanders, while Dutch (Hollands) is the older general name of Dutch as well as the regional language and dialects of the populous and so important for the development of the Netherlands Provinces of North and South Holland with their dense urban culture (Amsterdam, Haarlem, Leiden, The Hague, Delft and Rotterdam). Moreover, the past and present of Dutch are closely connected with the north-south contrast, from which - after changing cultural emphases - more and more an overarching linguistic community with a lively literary exchange has grown; The position of Flemish in Belgium has also been strengthened enormously for a hundred years because the Flemings have strictly adhered to the standard language Algemeen Beschaafd Nederlands (ABN), which is more anchored in Holland.

The first all-Dutch philological congresses took place in Ghent in 1849, in Amsterdam in 1850 and in Brussels in 1851, not insignificantly supported by the Vlaamse Bewegungsing, i.e. the Flemish language movement in Belgium, which had been independent since 1830 but was still one-sidedly French. In the wake of these congresses, the extensive "Woordenboek der Nederlandsche Taal" (1st delivery 1864, 1st volume 1882, 36 volumes have been published so far) began in Leiden with increasing Belgian participation since 1851. Similar to the "German Dictionary" by the brothers Jacob and Wilhelm Grimm (1852/54 to 1970), it presents the entire vocabulary from 1500 to the present in exemplary alphabetical articles and should be completed by 2000 as the largest dictionary of a language at all become.

Since the 1950s, the governments of both countries have published a revised list of words for their common language ("Woordenlijst van de Nederlandse taal", 's-Gravenhage 1954). In 1980 the Nederlandse Taalunie, supported by both countries, was founded as a supporting umbrella organization for language issues.

The yardstick for the increasing prestige of Dutch in Belgium was the skillful attitude of the royal family, which gradually tried to compensate for the bitter language dispute between Flemings and Walloons. King Albert I took the first oath, in addition to French, in Dutch in 1909, and Julius Hoste, the editor of the leading Flemish newspaper "Het Laatste Nieuws", had to be consulted for the correct formulation. King Leopold III, who lived in exile in Switzerland after the Second World War and renounced the throne in 1950, was smart enough to give his son, the later, late King Boudewijn (Baudoin I), extensively in the Dutch Leiden from an early age to have the standard Dutch language taught so that he could deliver his speech from the throne in 1951 in front of the French version. King Albert II, on the other hand, took his oath on August 9, 1993 in the three national languages ​​of his now federally structured state: first Dutch, then French and finally - a little less perfect - German.


Independent training in the standard language

As far as the relationship between Dutch and German is concerned, since the pioneering Leipzig academy treatise by the Germanist Theodor Frings in 1944, "The position of the Netherlands in the construction of Germanic", one can underline that it is to be understood as a kind of Germanic key language on the North Sea, namely as an old independent structure between English and Frisian on the one hand and Low German-High German on the other.

This is also intended to fight against a misunderstanding that still lives on today - combined with the completely inaccurate idea of ​​so-called Hollandization: Dutch has undergone a regrettable and actually unnecessary development into a new written language and is therefore a split off part of German. On the other hand, the comparative Germanic philology has to emphasize again and again: Dutch is not a dialect like Mecklenburg Platt, Rhine Franconian-Hessian or Upper Saxon; Even Old and Middle Dutch were independent languages ​​compared to the older levels of High and Low German.

They are closely related to these, to be sure. But it is a long leap in language from the Central Dutch "Van den vos Reynaerde" of the 13th century to the newly designed Low German "Reinke de Vos" (printed in Lübeck 1498), which the literary theorist Johann Christoph Gottsched translated into High German in 1752 and Johann Wolfgang von Goethe redesigned it as "Reineke Fuchs" in 1793.

Finally, New Dutch developed completely independently of German in the 16th and 17th centuries, not least because of the biblical translation of the so-called "Statenbijbel" (picture), which was anchored in the basic languages ​​and not based on Martin Luther's Germanization, to become today's standard language. The publication of this vernacular Bible on behalf of the Dutch States General was decided by the National Synod of Protestants in Dordrecht from 1618 to 1619; a committee of translators from the entire language area was involved. The work was first published in Leiden in 1637, but was also highly regarded in northwest Germany until the 18th century.

In contrast to German, Dutch has not undergone any shift in the hard closure sounds (examples: tien / ten, kerk / church, open / open) and has not implemented any sweeping umlauts (groter / larger, boeken / books, where the "e" is an elongated sound ); on the other hand, it stands out from English by largely lacking palatalization (kerk / church, kaas / cheese, keuken / kitchen, slapen / sleep, straat / street). As far as the formal system is concerned, the moderately inflected Dutch with two genders (de denotes masculine and feminine, het neuter) stands, so to speak, between the highly inflected German (der, die, das) and the less inflected English (the), and it connects with this for example through the personal pronominal forms on h- (hij, hem, haar / he, him, her).

All in all, Dutch has a high degree of antiquity, as it has changed little old Germanic structures in some respects and is relatively close to the oldest fully transmitted Germanic, the Gothic of the 4th century, to this day. If Friedrich Schiller in his "History of the Fall of the Netherlands" (1788) names the "foundation of Dutch freedom" one of the most memorable state events of the modern era, the preservation of one's own Dutch language up to the standard language of today can be considered an important part of this freedom in the comprehend diverse Europe.

- The position of the Netherlands in the construction of Germanic. By Theodor Frings. Max Niemeyer, Halle an der Saale 1944.

- Dutch studies in development. Lectures and work at the University of Zurich. Edited by Stefan Sonderegger and Jelle Stegeman. Martinus Nijhoff, Leiden / Antwerp 1985.

- Give and take. Theoretical and historical contributions to the German reception of the Dutch language and literature. Edited by Stefan Sonderegger and Jelle Stegeman. ICG Publications, Dordrecht 1993. 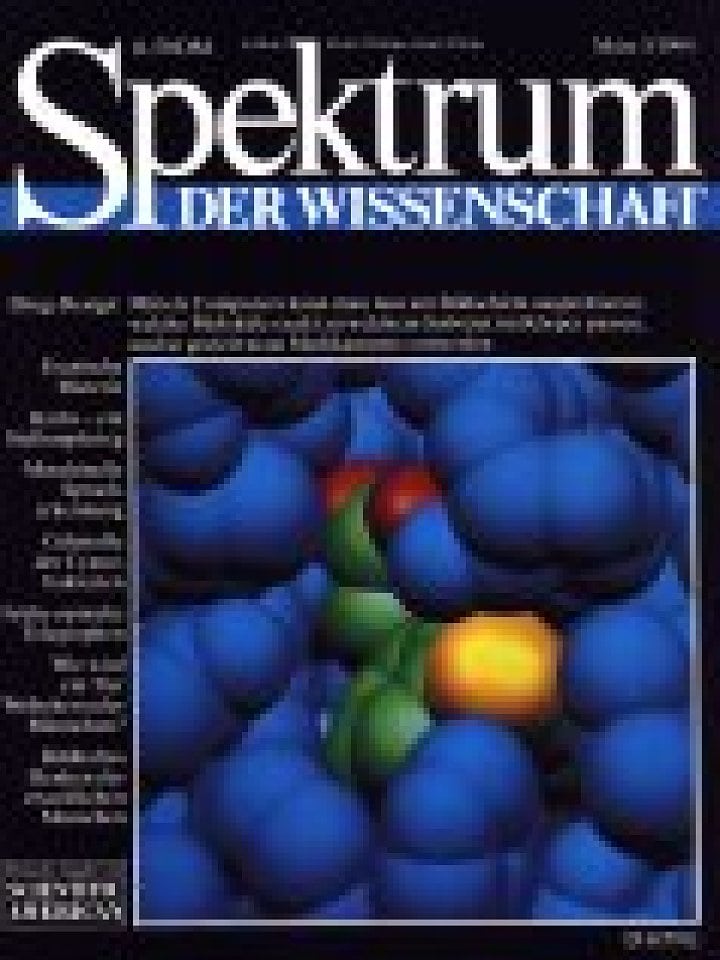 This article is contained in Spectrum of Science 3/1994