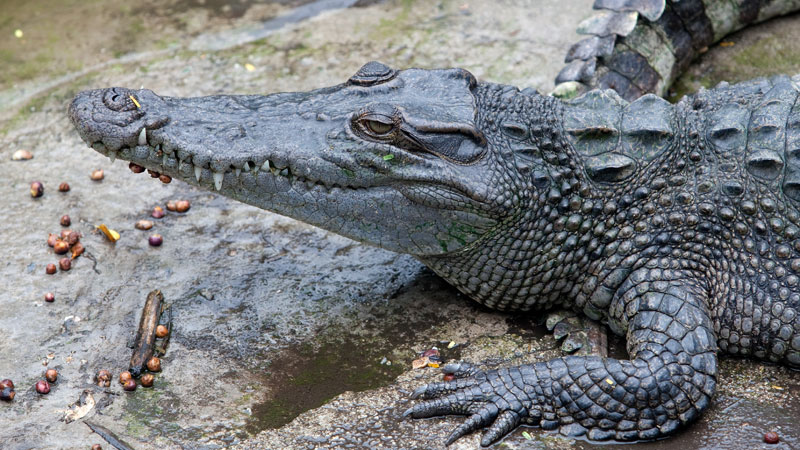 Even if the animals have been hunted for their meat since time immemorial, some species only became endangered with the increased use of their leather. In the 18th and 19th centuries it was z. B. in the USA further processed into shoes, bags and belts, which led to a strong decimation of the Mississippi alligator. The Nile crocodile and other species in South America, Asia and Australia were also on the hit list of the hunters. Only after the animals were placed under protection did the populations (at least partially) recover.

In order to meet the continued demand of the leather industry for crocodile skins, crocodiles began to be raised on farms in the 20th century. Thailand operates most of the farms in Asia. Almost the entire population of the country (approx. 70,000 animals) is kept on farms. Not only the leather of the animals is marketed, but also their white meat. Since it has been known that it contains hardly any fat and tastes similar to chicken, the armored lizards are not only bred in the tropics and subtropics, but sometimes even in Central Europe.

As a rule, the animals are slaughtered after 2 to 3 years - i.e. when the skin meets the criteria of the leather industry, but the meat is still tender in taste. The edible parts from the shoulder, back and tail are then processed into steaks, chops and fillets. With appropriate feeding, the meat of the animals is fine-grained and tender. Only chops from the lower part of the tail are a little fatter than the rest of the meat.

use:
There is a whole range of different regional dishes that are prepared from and with crocodile meat. Especially in the Cajun cuisine of the American southern states (e.g. Florida, Louisiana) it is a fixed component of various stews, ragouts, goulash and stew dishes (the alligator stew from Louisiana is famous), but is sometimes also fried or grilled. And America wouldn't be America if it weren't for a crocodile burger too. This is also known in Australian cuisine, but here the crocodile is mainly subject to Asian influences - so it is not only cooked in small pieces in the wok, but also seasoned with teriyaki and yakitori sauce or fried in butter with lemongrass.
Crocodile meat is also very popular in the Caribbean, especially in Cuba, where it is prepared in all imaginable ways, always garnished with plenty of exotic vegetable side dishes and always flavored with a wide variety of spices - just as it is the custom in Caribbean and Creole cuisine is.