The way into space is open - but will we go it?

With the successful launch of the Falcon Heavy missile, space is finally open to people. While manned spaceflight was previously an insanely expensive prestige project, it is now becoming affordable. But what could actually drive people into space and on alien celestial bodies? I still see the danger that we will never get past a few small research stations on the moon - if at all.

A trip into space on the Falcon Heavy costs only around US $ 1,500 per kilogram of cargo, a real step forward over the space shuttle (US $ 20,000 per kilogram). And if Elon Musk has his way, he would like to lift more than 150 tons of cargo into the sky with his Big Falcon Rocket for 6 million US $ (approx. 40 US $ per kilogram) from 2022. Then huge space stations could emerge, colonies would grow on the moon and Mars and courier services would deliver a gift package to the moon for € 99.

Without the determination of an Elon Musk, this development might never have happened. The rocket manufacturers lived in a symbiosis with the governments, who paid them any price for their technology, which was never really updated. And telecommunications satellite operators have recovered the high start-up costs from their customers.

Manned space travel had lost its destination. In the long run it was too expensive and too unspectacular to send astronauts, cosmonauts or taikonauts on endless rounds around the earth. Since the end of the shuttle program, the USA has no longer had the opportunity to shoot astronauts into space, and Russia only provides the taxi service to the ISS - for expensive money. There have been no Russian projects of their own for years. China (maybe) would like to send Taikonauts to the moon, but this project does not make a particularly concrete impression at the moment.

With the new ventures of the billionaires Musk and Bezos (the founder of Amazon), space travel becomes affordable for the first time. If, for example, a chemical company were to consider producing special alloys in a high vacuum and weightlessness, it could launch its systems and operating personnel into orbit at a reasonable cost. It would perhaps reside in the inflatable space stations that hotel tycoon Robert T. Bigelow plans to build in series soon.

Still, I wonder if it will ever come to that. The conditions in space, on Mars, on the moon or in the asteroid belt are hostile to life. The worst arid regions and ice deserts on earth look downright inviting in comparison.

The new paradise for scientists

Many scientists dream of exploring new worlds and coming home with results that they could never achieve any other way. For that they would like to spend a year on the moon. In the Antarctic, too, various states operate research stations that are completely cut off from the outside world in the Antarctic winter. Germany's outpost on the coast of the southern polar continent is called Neumayer III. Up to fifty people can work there in the summer. In winter the crew shrinks to nine steadfast.

With the new reusable large rockets, similar stations would also be possible on the moon. Any reasonably wealthy state could build, man, and maintain them. But why should anyone settle there? Antarctica has no real inhabitants either. Nobody moves there to stay. No children are born there. Even on Greenland, the largest island in the world, there are less than 60,000 people, although they do ice-free Area is larger than Germany. Perhaps that will soon change, because valuable mineral resources are suspected to be beneath the thawing ice.

After all, that would also be a reason to settle on the moon, Mars or on asteroids. So far, however, nothing has been found that could be so valuable that mining, processing and the long way to earth would be worthwhile.

So far, no one has succeeded in creating a large, closed, stable ecosystem. A first attempt (Biosphere 2, 1991-1993) in Arizona failed so impressively that no one wanted to repeat it so far. At some point the problem will certainly be solved better, but there is still a constant threat of the system overturning with catastrophic consequences for the residents.

If children were actually born and raised on the moon or in space, they would have no chance of living on earth. Your circulation, your internal organs and your weak muscles would not be able to cope with the crushing pressure of earthly gravity. Even for people who were born on Earth but spent months or years in low gravity, returning is an extreme burden.

Cynics may object that a colonization of the moon and Mars once started cannot be reversed for this reason alone. Once people have settled there, they cannot go back. They will do everything possible to maintain and expand their colonies. If they fail, there is no plan B. But even that does not necessarily mean that they have to be successful when the outside world is as hostile to life as on the red planet or the dead and dry moon.

Perhaps, as already indicated, one could manufacture high-tech products in space that require a high vacuum. But you didn't need a permanent occupation for that. It is probably enough for a maintenance team to drop in from time to time. Day-to-day operations are ensured by an artificial intelligence that feels comfortable in orbit. She does not suffer from nausea, knows no muscle wasting, and does not have to cope with the annoying rush of blood in her head.

So that nobody misunderstands me: I would like to spend a year researching on Mars. Or analyze complex carbon compounds in the methane lakes under the clouds of Saturn's moon Titan. Or look for life in the deep salt seas of Jupiter's ice-covered moon Europa. But I really don't know if I want to live there. And I wonder what could induce people to want to settle there permanently.

When millions of Europeans emigrated to America in the 19th century, they were rightly convinced that they could build a new existence with their bare hands if necessary. But outside of the earth the effort to survive is already enormous, maybe even too great.

The crucial question: why all this?

I am not sure that people will really leave the earth in large numbers. So I would like to pass the question on. What could induce people to settle on hostile celestial bodies despite all the costs, risks and uncertainties?

Only if we find an answer to this question that is other than “nothing” will we leave earth permanently. 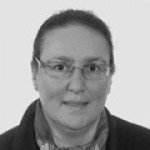 Martina Grüter is a doctor and has been dealing with congenital prosopagnosia, a hereditary deficit in facial recognition and processing, since 2001. The topic showed her how complex the processing of information in the brain is and how little knowledge is really secured. She has always been fascinated by words and languages.