Why is it called the Divine Comedy 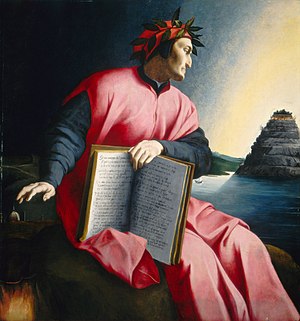 Dante pensively looks at the mountain in the background. It is the mountain of purification on which one should become pure.

Dante Alighieri was one of the most famous Italian poets. He was born in the city of Florence in 1265 and died in the city of Ravenna in 1321. Italian literature began with his work “The Divine Comedy”: Dante wrote in Italian, before that the poets in Italy wrote in Latin.

At the age of nine he met a woman named Beatrice whom he adored all his life. Beatrice died early, but she lived on in Dante's work because he continued to write about her. However, it is not at all sure whether this Beatrice ever lived.

Dante was actively involved in the politics of his hometown and wanted to change many things. He was therefore banished. He received an offer to return home, namely a fine. However, he refused.

Dante's main work was "The Divine Comedy". Comedy doesn't mean the story is funny, it means that it ends well. Divine has nothing to do with the content. The word was later added to the title to praise the work. “The Divine Comedy” tells of Dante's journey through hell, to the Cleansing Mountain, all the way to paradise. There is no fire in his hell. The devil is in the ice. In heaven he hoped to see Beatrice again.

There are also other search results for “Dante Alighieri” from Blinde Kuh and Ask Finn.