What is serenity in football

Jürgen Klopp and the discovery of serenity

"18 years old? Wow!" Jürgen Klopp himself seemed a little surprised at how long he had been sitting in the dugout. A reporter had asked the coach of Champions League winners Liverpool FC before the final of the Club World Cup in Qatar how his way of training had changed over the past 18 years. The 52-year-old actually didn't go into that in his detailed answer. Rather, Klopp stated that he "naturally developed primarily as a person". "I'm calmer than I used to be, I'm not so easily nervous or overly excited. That's the good thing about age, which you obviously don't know yet," said Klopp to the apparently much younger reporter. "But you'll see that's cool."

Klopp began his coaching career in 2011 with the then second division club FSV Mainz 05. He kept making headlines because of his outbursts of anger on the sidelines. In 2013 he attacked the fourth official in the Champions League game against SSC Napoli so massively that he was banished to the stands and then suspended for two games. Klopp is still committed when he coaches his team, but he no longer allows himself to be really freaked out. His successes have made him more relaxed. "I'm a better coach than I was at the beginning, 100 percent," said Klopp in Doha. "More people know me now. It's not too cool, but it is a sign of some successful moments in my life." 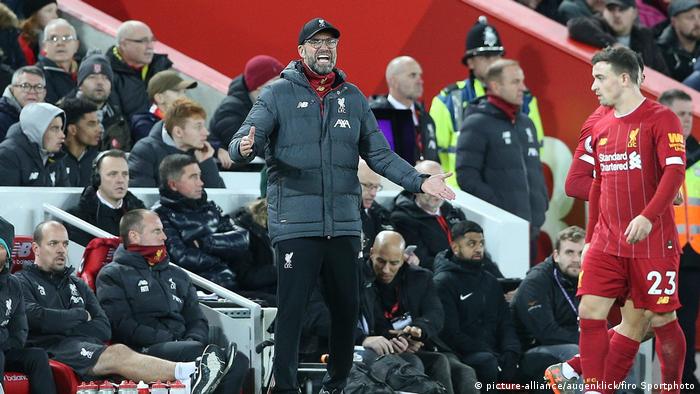 This is how Jürgen Klopp is known as a trainer: always 100 percent

After all, Klopp not only has two German championship titles and a DFB Cup victory with Borussia Dortmund on his list of successes, but also received the highest consecration as a club coach by winning the Champions League with Liverpool FC. It was not for nothing that FIFA named him "World Coach 2019". In the Premier League, Klopp is currently more than around: 16 wins, one draw, that's the balance after 17 games. His first league title with Liverpool is in the air. The "Reds" lead the table with a comfortable ten point lead over Leicester City. And now the first triumph in club history beckons at a Club World Cup. "I would never do something like that in a team meeting," revealed Klopp in Doha. "You can't compete because you want to be a legend one day. You just have to win football games, do your best."

The fact that he has always given everything as a coach in the last 18 years has not been without consequences. "Compared to then, I look different, massively different," said Klopp. "It shows that I'm doing a pretty intense job. But I love it and that's why I probably don't feel the intensity that much." And so Jürgen Klopp will be in the final of the Club World Cup on Saturday against the winner of the Copa Libertadores, CR Flamengo Rio de Janeiro from Brazil (Kick-off at 6.30 p.m. CET, from 6.15 p.m. on DW live ticker) Experience the way you know him: ambitious, focused and committed.