How many seats are there under Uttar Pradesh

The hunt for world records in India is often pursued with a particular passion. Since April 7, 814,000,000 eligible voters have been involved in a new record: never before have so many people been called to actively participate in a democratic parliamentary election. Together they could form a queue that would circle the equator eight times. Carrying out the election for the allocation of 543 seats in the Indian lower house, the Lok Sabha, poses enormous challenges. Spread over nine election days until May 12, voting machines must be set up in 28 states and seven federal territories, on which voting can then be done at the push of a button. In addition to the enormous logistical and security-related effort, the electoral commission tries to take into account local weather conditions and the associated harvest times as well as school holidays. The result of the vote count is to be announced on May 16, and the new lower house, which will then elect the new government, must have been constituted by the end of May.

Despite all the efforts of the polls, it is uncertain who will take responsibility for the well-being of around 1.25 billion Indians at the end of May. In particular, the relative majority vote, in which the candidate with the most votes in a constituency takes the seat in the Lok Sabha, and numerous electoral agreements with regional parties as well as short-term changes of sides by candidates make the result incalculable.

Nevertheless, many expect a defeat of the governing coalition of the United Progressive Alliance (UPA) under the leadership of the Indian Congress Party (INC). The 81-year-old Prime Minister Manmohan Singh is no longer running after two terms in office. In his place, the INC sends Rahul Gandhi, the 43-year-old offspring of the Nehru Gandhi political dynasty and Vice President of the Congress Party, into the race as the unconditional top candidate. Apparently, his mother Sonia Gandhi, who has chaired the Congress since 1998, wants to save him from possible accusations after an impending election failure. Rahul Gandhi, who has been seated in Lok Sabha since the penultimate election in 2004, when he took over his mother's traditional constituency in Amthi in the state of Uttar Pradesh, also has a rather wooden, friendly and, compared to other top political leaders, rather inconspicuous Image.

After a decade of rule by the UPA, the balance sheet is mixed; the time was marked by numerous bribery scandals. Although the INC is particularly committed to fighting poverty and has launched national development and supply programs, for example a 100-day job creation program for rural households, the establishment of health insurance for the poorest and other food subsidies, the successes are limited. In state elections, the Congress Party has been losing influence for years and is increasingly acting as one opposition party among many or becoming a junior coalition partner of regional parties.

The right-wing nationalist opposition alliance of the National Democratic Alliance (NDA) under the leadership of the Hindu nationalist Indian People's Party (BJP) has better chances of winning. Her top candidate, 63-year-old Narendra Modi, acts as a bearer of hope. The prime minister of the state of Gujarat is considered a business-oriented and assertive politician. However, he is biased due to his inglorious role in the communalist pogroms that were primarily directed against Muslims in Gujarat in 2002. Nevertheless, a possible government under Modi is most likely to be able to revive the noticeably slower economic growth. The NDA had last ruled from 1998 to 2004, but then surprisingly lost to the UPA, which scored points with its election campaign topics, which were primarily aimed at the concerns of the rural population, while the NDA ultimately unsuccessful the economic boom of previous years with its "India Shinig" campaign tried to use for himself. 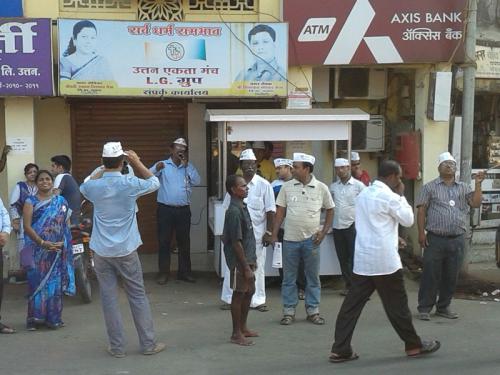 Supporters of the Aam Aadmi party at an election rally in Maharashtra (Photo: Fritzi Titzmann)

As a further coalition, the "Third Front" is also positioning itself. This alliance consists of seven regional parties, including the most populous state of Uttar Pradesh, neighboring Bihar and Tamil Nadu on the southern tip of the subcontinent, as well as four left-wing parties. It could well win if it won the support of other parties after the ballot. Government coalitions of heterogeneous, smaller parties existed from 1996 to 1998, but they were always short-lived. The Aam Aadmi Party (AAP), which is standing without a coalition agreement, could play an important role here. The still young "common man's party" emerged from an anti-corruption movement. She was able to achieve a respectable success in the election in the federal district of Delhi in December last year and will now compete nationally.

As uncertain as the outcome of the election may be, immense challenges await the winners. India has experienced considerable economic growth since the 1990s, but has only partially overcome many problems - above all poverty. The new, predominantly urban middle class comprises 350 million people. Some Indians have made it into the league of the super-rich, according to the Forbes 2013 ranking for India, there are 55 billionaires. But 70 percent of the population still live below the poverty line of 1.25 US dollars a day. Around 250 million Indians even live on less than one US dollar a day, and a good third of all children suffer from malnutrition. The choice is likely to be made in the country, where over two thirds of the population live and half of the workforce works in agriculture.

Patriarchal and elitist structures continue to dominate Indian society. The caste system persists despite new forms of work and sometimes even adapts to these changes quite flexibly. Although modern professional fields, for example in the areas of engineering or administration, no longer represent hereditary professions per se and thus let this aspect of the caste system more and more take a back seat, the majority of marriages still take place within the respective caste. Numerous quota programs for disadvantaged castes (the so-called Other Backward Classes - OBC), Dalits (so-called casteless "Untouchables" or Scheduled Castes - SC), Adivasi (indigenous groups or Scheduled Tribes - ST) and non-Hindus tend to promote the and demarcation as inclusion. Apart from a few mostly private educational institutions, school education has hardly improved in many places for decades and the dropout rate is high, as child labor is indispensable for many families. Corruption is widespread and encompasses many areas of everyday life, from access to medical care to filling jobs. Numerous internal conflicts - often in combination with ethnic and religious as well as political-ideological lines of conflict - have been simmering for years. The violent crackdown by the security services against members of the Muslim majority in the Indian part of Kashmir, against separatists in the northeast and Maoist Naxalites in central India, which goes well beyond the use of anti-terrorism, regularly leads to serious human rights violations. In combination with this, but at the same time going far beyond that, it must unfortunately be emphasized that, in particular, structural violence against women and chauvinism are virulent almost nationwide, as well as all forms of "queer" sexuality since a ruling by the Supreme Court of December 2013, according to the section 377 of Indian Criminal Law is criminalized.

Election campaign in the face of contradictions

Meanwhile, the election campaign has been going on for weeks. It will drag on until the last time the voting machines are set up on May 12th, when the election marathon in the populous states of Bihar, Uttar Pradesh and West Bengal comes to an end. The appearances of the candidates have the character of folk festivals including a folk kitchen. The electorate - including 100 million first-time voters - want to be entertained. Party representatives try to win the favor of local dignitaries and spiritual teachers, whose election recommendations can be decisive. Promises are made and campaign gifts are distributed. The electoral code tries to counteract the worst excesses, which actually forbids candidates from covering their political opponents with outrageous denigrations. In addition, the government is now prohibited from influencing voters through new subsidies and funding programs. For a short time, the real contrasts recede, which can be seen in the fact that, on the one hand, India is ambitiously shooting Mars probes into space, is active as a regional nuclear power and the world's largest arms importer and, on the other hand, so many people suffer from hunger and insufficient medical supplies. It is loudly criticized that the corrupt bureaucracy and judiciary work extremely slowly. Promised and postponed infrastructure projects are now to be tackled, the guilty parties are to be prosecuted. Even protecting the environment suddenly becomes important. The skepticism that prevailed in the population beyond the election campaign period towards a politically corrupt group of politicians should now rest. The disillusionment can wait until after the election.