Texas-born Saul Armendariz's life story does not describe an ordinary wrestling career. As drag queen Cassandro, he has been fighting in Mexico since the late 1980s - with success that made him famous far beyond the country's borders. As one of the few wrestlers who came out himself, he had to defy a multitude of homophobic hostilities in his career.

This article is older than a year.

"Lucha Libre" is the Mexican form of freestyle wrestling. The often spectacular exhibition fights are considered one of the most popular sports in Mexico and fill arenas - but the wrestling of masked heroes has increasingly become a successful export product in recent years, which is also very popular abroad.

The mixture of competition and acting makes a strong distinction between “good” and “bad” and thus heats up the mood - it does not matter that the winner is usually determined long before the encounter. The wrestlers, "Luchadores", can be roughly divided into two categories: The "Tecnicos", who try to score points with their technical superiority and are portrayed as heroes - and the "Rudos", for whom as "Bad Boys" no rules apply.

In women's clothes for "amusement"

Although Mexican sport also stands out visually from the multitude of regional wrestling variants due to its dazzling play of colors, the strict black and white drawing of the figures actually does not leave much room to break out of tradition. As "Exotico" Armendariz - ring name Cassandro - does not fit into any scheme. 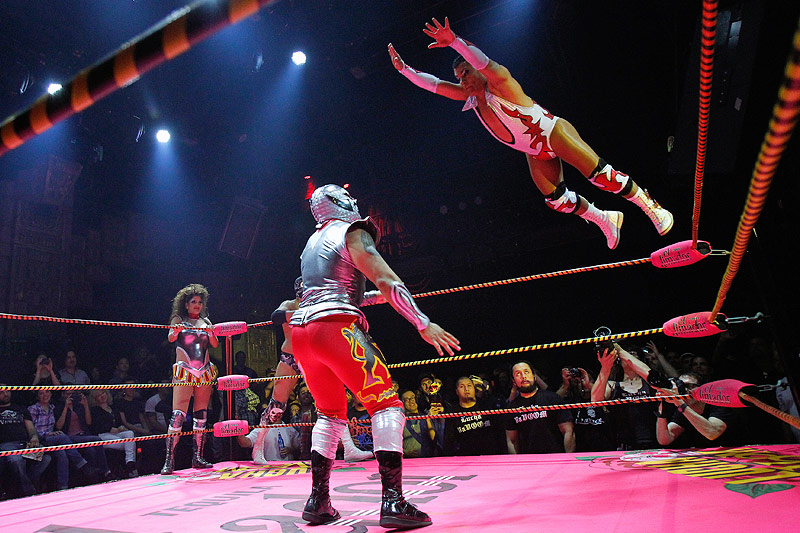 In contrast to other wrestling variants, “Lucha Libre” relies on more acrobatics: Cassandro (right) jumps from a corner of the ring onto his opponent

“Exoticos” usually appear in women's clothes and are primarily used to amuse the audience without being perceived as serious opponents. The characters are deprecated as stereotypical homosexuals, usually embodied by straight men. In such fights, the audience prefers to react with “Maricon” chants (“fagot”), thereby underlining the machismo image that wrestling internationally has for good reason.

Coming out as an exception in the wrestling world

But Armendariz ’character Cassandro is no laughing stock: With great physical effort, he has been fighting since the late 80s to ensure that the" Exoticos "are gradually seen as a kind of wrestling" gender "of their own. Armendariz, who is one of the few wrestlers in the world who openly calls himself gay, grew up in El Paso, Texas, right on the Mexican border near Juarez - the town that had been around for a long time because of the drug cartels that were at war there is considered one of the most dangerous cities in the world.

His youth was marked by severe physical and verbal abuse, he dropped out of school prematurely and made the decision to become a "Luchador". He began his career as a masked "Rudo" before he took off his mask and fought as an "Exotico" in women's clothes. Armendariz initially stepped into the ring in his mother's blouse and the train of his sister's dress - but his fighting style did not correspond to that of the classic "exotic". The character Cassandro was anything but a snack, the audience went wild.

Title win as a milestone for "Exoticos"

When he was supposed to fight for the championship against the respected "Luchador" Hijo del Santo in the early 90s, hatred against the then 21-year-old increased sharply. A homosexual could not even come close to competing with an established champion, was the tenor of the audience at the time. Armendariz tried to kill himself under the enormous pressure, but was saved by a colleague. The fight against del Santo took place - Cassandro lost, but without losing his dignity.

Only a year later, Cassandro finally won a title: It was the first big win for an "Exotico" in wrestling history. Although the win - as usual, the result was already determined before the start - meant little in terms of sport, it was the reward for Armendariz ’hard work, which he continues to this day. A damper, however, was his drug addiction, which has accompanied many careers in the industry, all of which are marked by constant physical pain.

According to his own statements, he overcame his addiction in 2003 - since then he has been getting back into the ring regularly. With “Lucha Libre” it is less the victories than the presence at major events that are decisive for success: Cassandro was not always able to win, but he was part of numerous “Luchas de Apuestas” - fights in which not titles, but hair and masks are at stake. The high stakes are a highlight for the audience: Formerly invincible heroes are unmasked - for wrestlers without a mask, the head of hair must serve as a sign of humiliation.

With his constant commitment Armendariz advanced to the audience's favorite and at least established his own "Exotico" to a figure who is part of the show, but is no longer exposed to ridicule. This does not automatically mean that the homophobic hostility that accompanied him for decades will suddenly stop. But also outside the ring, Armendariz advocates more diversity and regularly gives lectures to get his message across.

When he enters the ring as Cassandro, Gloria Gaynor's “I Will Survive” sounds in the arena. For Armendariz, the song could be important in several ways: As "Exotico" he managed to make a name for himself as a homosexual in a sport characterized by homophobia and macho behavior. As a private person, he overcame many crises, not least countless injuries: After four operations in recent years, which were necessary due to the physical strain, Cassandro will probably not give up in the future.