Tug in the Second World War: the dirty job of rescuers

Even in World War II, people smugglers were criminals - and the last hope of many refugees. Because legal paths were blocked even then. 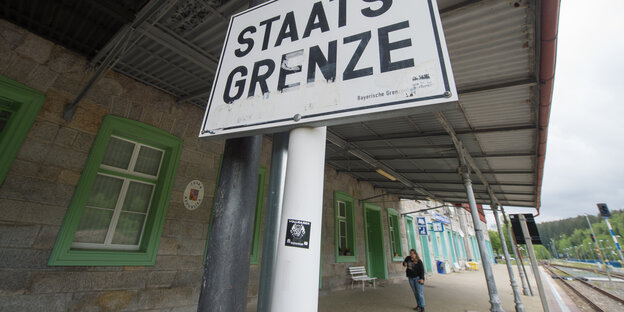 Then as now: Without help - even paid - there is often no hope Photo: dpa

It was at the beginning of August 1942 when the Brussels watch dealer Simon Sonabend received the request from the German military administration that his 15-year-old daughter Sabine had to get ready for a “work assignment” in the east. Son evening was a Jew; he knew what that meant. The family - the parents, two children - decided to flee.

The destination should be Switzerland, a country Sonabend knew well from his business trips. The escape plan was risky: the family had to cross the Belgian border undetected, through France, which was occupied by German troops, and then across the Swiss border, which was completely closed to refugees. Going out on your own was hopeless.

The Sunday evenings made contact with a group of smugglers. She got false passports and other papers. Two “passers-by” took the refugee family across the French border by train and accompanied them through France to Besançon. Then it went on in the truck. Shortly before the Swiss border, a local guide took over and took them at night on secret paths through the mountains, past the patrols of the German and Swiss police.

On August 9th, they left their home in Brussels on Sunday evening, and on August 15th they met friends in Biel, Switzerland. Their escape had cost 120,000 French francs, half payable at the beginning and half after successful completion: an extremely high price, about ten times the annual salary of a French worker. The sun evenings were wealthy and paying. It was about her life.

"Smuggling emigrants" is a "dirty job", said the Swiss Federal Councilor Eduard von Steiger, who is responsible for the police, at a press conference at the same time. The more severely the authorities took action against refugees, the more their speeches focused on combating the smugglers' gangs.

"The worse the situation, the less we respect the legality"

As early as 1938, Switzerland introduced a visa requirement for all German “non-Aryans”. Jewish refugees could only cross the border illegally and therefore often had to seek help from people smugglers. In the summer of 1942, when the deportations of Jews in Holland, Belgium and France suddenly increased the number of refugees, the regulations were tightened further: Refugees who had successfully crossed the border illegally should be deported again immediately.

“The influx of foreign civilian refugees,” wrote the Swiss Federal Council, “is now more and more organized, is being promoted by commercial 'passeurs' and has in recent months assumed an extent and character that increasingly rejects foreigners must take place ". The key words “organized” and “commercial” alone suggested gang crime and the uninhibited pursuit of profit - the defense against refugees, which was unpopular with many Swiss, should appear as a legitimate fight against crime.

Being a mother must be the greatest happiness. Thought Karo Weber. Now she has a son, but it's just not nice. You can read why mothers can quarrel with their role in the taz. On the weekend of July 2-3. Also: Brexit. Migrants in particular feel the consequences. How do you react to that? And: higher than soprano. The countertenor Andreas Scholl on images of men, the anarchic aspect of baroque music and his beginnings with the “Kiedricher Chorbuben”. At the kiosk, eKiosk or with a practical weekend subscription.

This may even have been the case for the smugglers who helped out on Sundays, the high price suggests that the family's misery was taken advantage of. Almost all escape stories from the time of the Second World War show that nothing would work without organized and paid help.

Little is known about the smuggling groups of that time, as everything took place in the mostly unscripted darkness of illegality. It is different with the numerous political and religious organizations that helped refugees, especially in France, in a very unselfish way. But they also had to rely on the cooperation of professional helpers.

The "Oeuvre de Secours aux Enfants" was a Jewish organization that hid Jewish children in occupied France who were about to be deported. As that became more and more dangerous, she smuggled the children out of the country, to Spain and mainly to Switzerland. For this purpose, papers were forged, typical Jewish names were replaced, the age of the children was adjusted - children under 16 were not allowed to be returned.

Volunteers usually took the children to Annemasse, the last train station before Switzerland near Lake Geneva. The small town was popular with youth groups as a holiday resort, foreign children were hardly noticed there. Paid smugglers were responsible for the last stretch across the border, locals who knew their way around and who might have smuggled goods before the war. The prices were between three and five thousand francs per child. The risk was great: not only in France, but also in Switzerland threatened prison sentences. In 1944 the Germans tightened border controls and the passages became too dangerous. Even for more money, there were no more local escape helpers to be found.

The volunteers were reliable, the paid ones were often not. The writer Manès Sperber reports in his autobiography how he was left alone by his smuggler, which was supposed to bring him across the Alps, at night after he had paid him, and only with difficulty and with a lot of luck found the right path.

Cimade, a group of young Protestant Christians, mostly women, helped out of conviction. "The more the situation worsened, the less we could respect the legality," said Madeleine Barot, the head of the organization. There was a dense network of private houses, pastorates and monasteries in which the Cimade helpers hid refugees in order to then bring them to safety across the Alps.

But even the charitable organizations could not prevent one thing: it was expensive to flee. Border guards wanted to be paid, ID cards and work certificates had to be obtained, tickets and hotel rooms had to be booked, doctors had to be kept ready, police controls had to be spied on and bribes had to be sent. The helpers themselves also had to make a living from something. The humanitarian organizations achieved all of this primarily through donations.

The most important escape route in World War II led across the Pyrenees. After the military defeat, the unoccupied part of France was overflowing with people desperately trying to get to America. Lisbon was the only remaining port for this. This path was blocked mainly by bureaucratic hurdles: travel bans, entry visas, transit permits, valid IDs.

The American journalist Varian Fry was sent to Marseille by the New York Emergency Rescue Committee in 1940 to save writers and intellectuals from the Nazis.

It is estimated that around 50,000 people managed to escape across the Pyrenees. It wasn't just Jews and politically persecuted people. The British secret service also used the route over the mountains. He set up lines of communication for downed fighter pilots who had been able to save themselves by parachute - they were brought back to England via Spain and Gibraltar. Many French chose this route to join the Free French Forces under General de Gaulle.

Whether humanitarian and military organizations or those who had set out on their own: everyone was dependent on locals who took advantage of the emergency situation and were paid. It happened that smugglers robbed refugees or betrayed them to the border police.

Some were themselves betrayed, arrested and executed when the Germans occupied the rest of France in 1942. The historian Emilienne Eychenne names over a hundred such cases. Most of them, however, simply made a living from their clandestine activities.

The “dirty job” of commercial people smugglers, of which the Swiss Federal Council spoke in such a derogatory way, also lived from the absence of the morally purer in the place where they were needed. It was fortunate for the rescued that there were people who, if only for a fee, did what they were supposed to do.

At the crucial moment, the Sunday evenings from Brussels found no one who offered help for money, no official to bribe. When they wanted to register as refugees, they met a correct police officer who had them deported back to France. There they fell into the hands of the German border police.

On August 24, the parents were deported from the Drancy transit camp near Paris to Auschwitz. Ms. Sonabend was gassed immediately upon arrival, her husband a few days later. The two children survived in France.