What is the Mayan religion 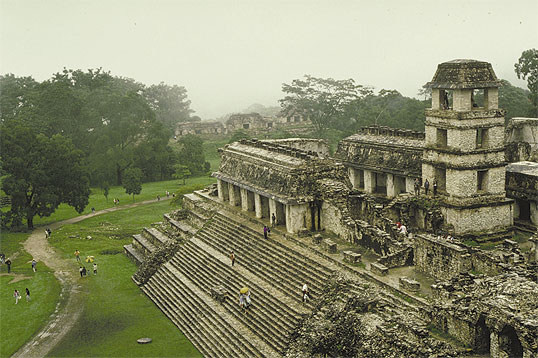 Palace of the Mayan City of Palenque (Corel)
The Mayan Empire - History, Culture, Religion and Fall

A Maya is an Indian people, or rather a group of Indian peoples in Central America. The Maya are very fascinating because they are considered to be the most developed pre-Columbian culture in Central America. The Maya built a large number of large cities with more than 10,000 inhabitants and achieved considerable cultural achievements for the epoch. At the time of its greatest expansion, the Maya area was roughly the size of Germany and consisted of around 50 small states. The center was the Mexican peninsula Yucatan. From there the Maya culture spread to Belize, Guatemala, Honduras and El Salvador. The high civilization of the Maya began as early as 3000 BC. And its heyday lasted until around 900 AD. After that, the Maya did not disappear like other high cultures in Central and South America, but the end of their cultural and political supremacy had already begun. In 1519, the invasion of the Spanish conquerors (conquistadors) under Hernán Cortés further weakened the Mayan culture, even if they did not succeed in completely destroying it. Around six million Maya still live in Central America today.

The Mayan culture was made up of different ethnic groups, which were connected by numerous similarities, but also differed. Cultural and religious traditions were largely shared among all Mayan tribes, but there were, for example, different forms of the Mayan languages ​​or peculiarities between the way of life of the highland and lowland Maya. The Maya lived in 50 independent city-states, which not infrequently fought wars with one another. It is astonishing that the active war tradition of the Maya did not stand in the way of the widespread dissemination of their culture. The aim of the Mayan Wars was not to destroy the opposing city-state, but to create dependencies and thus supremacy and prestige as well as to force taxes.
The power system was structured on a regional basis. Usually the nobility provided the king for an area, but other forms of rule and female rulers have also been handed down. A common democratic feature of Mayan culture was the election of a mayor every three years for each city-state. Maya society consisted of an upper class and a lower class. The upper class, the nobility, provided all important religious and political functions. The lower class consisted of peasants and workers.
The high culture of the Maya already knew a well-organized agriculture with complex irrigation systems. For dry seasons, the water was collected in reservoirs in order to then channel it into the fields when needed. Only in this way was it possible to feed such a large number of people. The Maya also had excellent mathematical and astronomical knowledge, on the basis of which they developed a complex calendar system. The Mayan calendar "Haab", for example, followed the solar year and had 365 days of 18 months with 20 days. The Maya script consists of around 800 different pictorial characters, all of which have not yet been deciphered. The Maya also produced ceramic art and colored wall paintings. A large number of stone ruins of temples, step pyramids and palaces are well preserved in the area around the Maya empire. The stone buildings were reserved for noble and religious buildings. The simple residential buildings made of wood and clay of the lower Maya layers have not been preserved due to the weather. The Mayan architecture had no arches. Square shapes and right angles are characteristic. Most of the buildings were windowless and only decorated on the outside. Like all Central American high cultures, the Maya did not yet know the wheel and did not have any beasts of burden. They only transported their building materials using human power and still erected buildings up to 65 meters high.

Religion played a very important role in the Maya empire. The number of religious buildings in the Mayan cities is correspondingly large. The king of each city-state usually held the highest religious position at the same time. The Maya imagined the world divided into three areas: the heavenly world, the earthly world and the underworld. The Mayan religion is one of the polytheistic religions. The gods were represented as mortal beings just like humans. The Maya kept the gods and the cosmos alive through offerings. There were material sacrifices, animal sacrifices, but also blood and human sacrifices. Since the blood was seen as the seat of the soul, priests sacrificed their own blood, for example by pulling thorn threads through their lips. As with the Aztecs, prisoners of war, but also members of their own tribe, were used for human sacrifices.

The cultural history of the Maya can be roughly divided into three epochs: the pre-classic, the classic and the post-classic. The post-classical period was followed by the Spanish colonization (1511 - 1697).

Conquest by the Spaniards

The Spaniards under Hernán Cortés reached the Mexican peninsula Yucatan in 1519. As early as 1511, 13 Spanish shipwrecked people had landed there. Two of them survived and one assisted the Spaniards in their plan to subdue the Maya. The flowering of the Mayan high culture was long over by this point. Nevertheless, numerous Maya peoples still lived in the area of ​​the once large and prosperous empire. When they realized the intentions of the Spaniards, they resisted and fought against submission. The conquest of the Mayan Empire was very difficult and costly for the Spaniards. There was not only one important center, the submission of which would have meant the fall of the entire empire, as the Aztecs succeeded in doing with Tenochtitlán. The Mayan Empire had a large number of important cities that had to be conquered. Nevertheless, the Spaniards finally managed to bring the empire under their rule and to destroy or suppress a large part of the Mayan culture. They also tried to Christianize the Maya by force. The last Mayan cities came under Spanish rule only in 1697.

There are approximately six million Maya who live in Mexico and Guatemala and the neighboring countries of Belize and Honduras. Most of them work as farmers and live in poor conditions. Many Maya still speak Mayan languages ​​and have also preserved much of their culture. In addition to the Mayan traditions, their religion often also contains Christian elements through proselytizing.

Back to the terrace
<?