The deep sea is nevertheless a playground for the strangest creatures. Fish, mollusks, worms, jellyfish and many others belong to the illustrious host of creatures that, depending on the point of view, can inspire, astonish or occasionally even scare the viewer. 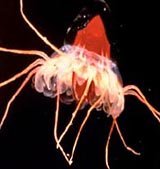 Particularly extraordinary and fascinating in this world of darkness, however, are the deep-sea animals, which have an optical aid that sets them apart from many others on earth: They shine. Such species are particularly common at a depth of 800 to 2000 meters. Many different manifestations when trying to generate light independently can be admired in these sea creatures. There are beings like the lantern fish, in which the light cells are arranged in special structures in the skin. Others carry their luminous organs, apparently sitting on a kind of handle, in front of them. The light is often produced by the body's own cells. However, it is not uncommon for deep-sea fish to "import" luminous bacteria into their cells, millions of which do the work for them.

Bioluminescence, as the luminous phenomenon is called with the scientific technical term, does not only exist in deep-sea inhabitants but also occasionally in terrestrial animals. Representatives with this special characteristic can be found in almost every important animal phyla. Perhaps best known is the firefly, a firefly that can often be seen in flight on warm summer nights. The so-called sea glow caused by flagellated unicellular organisms is also legendary.

But how do animals produce their light?

The underlying process is the same in all animals: special luminescent substances - called luciferin regardless of their chemical structure - are oxidized using oxygen and chemical energy (ATP). Light is released in the process. Amazingly, hardly any heat is produced in this reaction, the light yield is almost 100 percent. A patent from nature that is vastly superior to human technology. With a normal incandescent lamp, the efficiency is just five percent.

What significance do the luminous organs have for the marine life?

The lighting devices can have completely different tasks in the individual types. The frogfish, for example, try to attract prey with a kind of lantern that dangles in front of their mouth. The viper fish has a luminous oral cavity for the same purpose. But the light organs are by no means only used to attract prey. Bioluminescence can also be used when looking for a partner. Characteristic light patterns then symbolize “Hello, here I am” to the potential reproductive partner.

For camouflage purposes, some predators among the deep-sea organisms have reacted to this accumulation of luminous prey with a special adaptation. Melanostigma pammelas, for example, has a black pigment layer around the stomach that shields the glow of the prey animals that have already been eaten from the outside. Otherwise the danger of being eaten by another carnivore itself would probably be too great.