Can you wear a spacesuit underwater

Astronauts test NASA's new spacesuits underwater. You can read here what needs to be considered during the exciting training.

NASA is in the middle of preparing for astronauts to return to the moon in 2024. But before that happens, they have to perfect their spacesuits, among other things.

NASA has already designed the new suits that the astronauts will wear on their Artemis moon mission. Now she's testing the suits to make sure that people in them can walk well and perform complex tasks like manipulating tools. 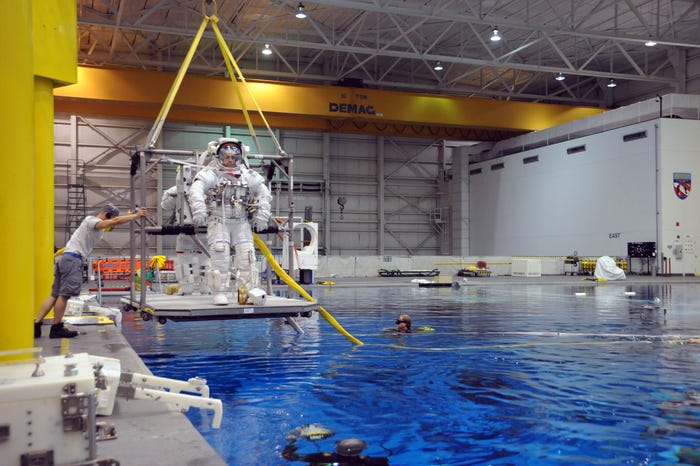 In NASA's simulation pool (Neutral Buoyancy Lab: NBL) in Houston (Texas), the astronauts in training wear spacesuits in a huge pool of water to simulate how they will feel in weightlessness.

The pool is 60 meters long, 30 meters wide and 12 meters deep. It contains around 20 million liters of water. More than enough to fill nine Olympic-size pools.

According to the astronauts, they are prepared surprisingly well for space in the pool.

"When I did my first space walk shortly after we stepped out of the hatch, the sun went down and it got dark. It felt just like I was in the pool," said astronaut Nick Hague on an episode of NASA -Podcasts "Curious Universe".

The taring of the astronauts' suits in the water enables various simulations:

The pool even includes true to scale replicas of components of the space station and spacecraft used for missions.

"We have experience with the space station, but we need to determine how we will train the crew for surface use on the moon during these special missions," said Daren Welsh, who leads the tests, on a NASA blog.

When training for space walks along the space station, the astronauts typically float around in the pool, looking at the models of the different parts of the station. Their suits are so weighted that they are neutrally tared.

But the moon is different 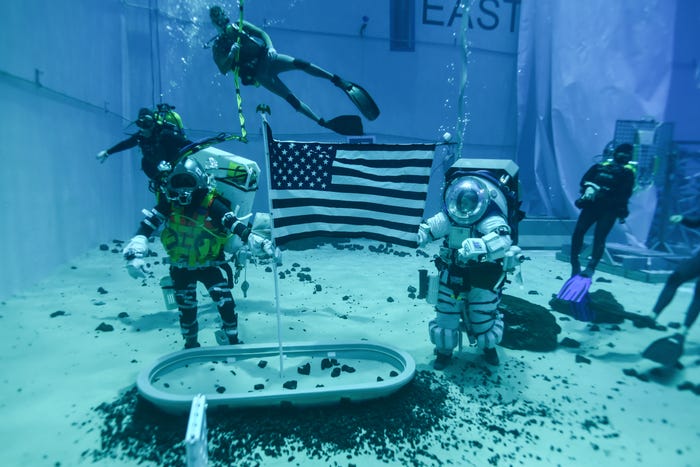 Unlike the space station, it has a low gravitational force, which corresponds to about 1/6 of the gravity of the earth. During exercises and tests in connection with lunar missions, the spacesuits are weighted so that they sink. The astronauts then practice walking across the bottom of the pool, which NASA employees cover with stones and sand to simulate the lunar floor.

Underwater, the astronauts practice setting up a flag, picking up stones and examining a spaceship.

NASA has not yet officially selected the astronauts for their lunar mission. But this type of exercise is essential both for testing the spacesuits and for training the people who will eventually step on the moon.

Traversing the rocky, uneven surface of the moon in low gravity is tricky. Apollo 17 astronaut Jack Schmitt learned this the hard way in 1972 when he suffered a few falls while walking on the moon, as you can see in this video:

The astronauts must also learn how to safely swing a chisel in lunar gravity. This ensures that it doesn't hit anyone or fly away. You will also need to prepare for the light conditions at the south pole of the moon, where crews might take lunar walks. The lighting conditions there are more extreme than at the places where the Apollo missions landed. Some areas are almost always bright, while others are almost always in the shade.

That is the plan

The Artemis program consists of three missions: First, a spaceship will orbit the moon without passengers. Then the astronauts will be put into lunar orbit on a flyby mission. After that, they will land on the moon.

However, it all depends on funding. NASA has asked Congress for a total of $ 28 billion over the next four years.

Our editor at the European Space Center

Our technology editor Ben Schulze also works as a safety diver in the European Space Center in Cologne. Do you have any questions about his exciting work? Let us know in the comments below. He will be happy to answer them for you! 🙂