What are the properties of the sun

The sun is about 4.57 billion years old and makes up about 99.9% of the total mass of our planetary system. It consists for the most part of hydrogen and helium and forms the center of our planetary system. The processes of the climate and life on earth are driven by solar energy. About a third of the tides are also caused by the effects of gravity from the sun. 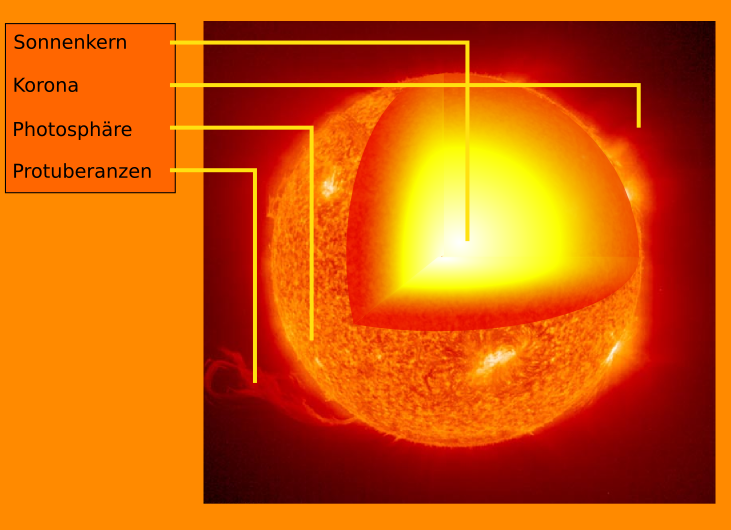 It makes up about 25% of the solar radius. At around 15 million degrees Celsius, all of the sun's energy is released here in a nuclear fusion reaction. Hydrogen nuclei fuse to form helium, releasing high-energy gamma photons. Around four tons of matter are converted into pure energy every second.

The radiation zone extends over 60-70% of the solar radius. When the particles of the plasma collide, the gamma photons from the nucleus are converted into longer-wave X-ray photons. The constant absorption and emission of photons causes them to move very slowly towards the surface of the sun. It can take 10,000 to 170,000 years before it gets there.

It is considered the surface of the sun and is 300-400 km thick. The solar energy is released into the environment here. In the meantime, the photons have lost their high energy and are mainly released as visible light.

It is the outermost shell of the sun and extends over several solar radii into space. At a few hundred kilometers above sea level, their temperature suddenly rises to up to two million degrees Celsius. The reasons for this are still unclear. However, such heating is only possible due to the extremely low density of the corona. During a total solar eclipse, the corona can be observed with the naked eye, as can be seen in the following picture. 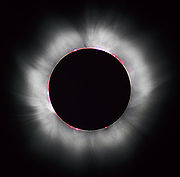 The sun has a very strong magnetic field. Irregularities in this field are visible through the so-called sunspots on the sun's surface. These are areas that are around 2000 degrees Celsius cooler in relation to their surroundings and therefore appear as dark areas. Magnetic arcs are created between these sunspots that carry ionized gas with them. These flows of matter - called protuberances - can protrude several hundred thousand kilometers into space.

Earth and sun in size comparison: