Thiols are sulfur analogues of alcohols with the general chemical structure R-SH. In contrast to alcohols, they hardly form hydrogen bonds and therefore have a lower boiling point. The low molecular weight representatives are volatile and have an unpleasant odor. Thiols are stronger acids than alcohols and can form salts with bases. Some active substances are thiols, for example the ACE inhibitor captopril.

Thiols are organic compounds with the general structure R-SH. They are sulfur analogues of alcohols (R-OH). R can be aliphatic or aromatic. The simplest aliphatic representative is methanethiol, the simplest aromatic is thiophenol (analogue of phenol).

Thiols are formally derived from hydrogen sulfide (H.2S) derived, in which a hydrogen atom has been replaced by a radical.

The names of the compounds are formed with the suffix -thiol. The outdated suffix or prefix mercaptan is also common for some molecules and active ingredients. The -SH group is referred to as the sulfhydryl group.

The name thiol is derived from sulfur.

Thiols are stronger acids than alcohols. Your pKa is around 8 to 10:

Like the alcohols, the thiols can form esters, the so-called thioesters. Ethers with a sulfur atom are called thioethers and organic sulfides (suffix: -sulfide).

Thiols can be oxidized to disulfides:

Proteins such as insulin and its derivatives can contain disulfide bridges between cysteines.

Some active pharmaceutical ingredients are thiols, for example the ACE inhibitors captopril or mercaptamine. 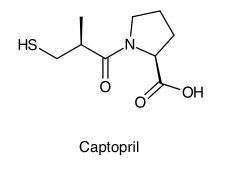 Support PharmaWiki with a donation!

© PharmaWiki 2007-2021 - PharmaWiki provides independent and reliable information about medication and health.
This article was last changed on 11/18/2020.
Imprint and data protection declaration
Show products for this page
<?