Time is an intertwined quantum

Off to the cloud!

Harry Harrison, Jack Vance, Gisbert Haefs and others. invented some - intergalactic thieves. And now Hannu Rajaniemi and his Jean le Flambeur - Elly Bösl introduces us to two volumes and is skeptical ... 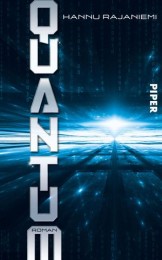 Jean le Flambeur, master thief, ekes out a bleak existence in the dilemma prison: every day, every hour he is forced to shoot himself with a revolver. On behalf of a goddess, the local warrior Mieli frees the thief because he is supposed to steal something. However, Jean has no memory of his previous life, his knowledge is limited to his name and his profession. Together with the warrior, her intelligent spaceship Perhonen and the omnipresent goddess, the master thief travels to Mars in the Oubliette, a wandering city in which everything is about privacy and its preservation. Here, of all places, he hid the clues and answers to questions about his identity, his history and his secrets. But nothing in the Oubliette is as it seems, and the traces Jean left for himself years ago are anything but easy to unravel. In addition, Isidore Beautrelet, the detective, is on his heels, willing to find out at any cost what the thief is up to.

“Quantum” is kind of exciting. And kind of confusing. You are constantly bombarded with weird terms, and whenever you think that you are finally finding your way around, your worldview is turned upside down again. Yes, of course, you don't have to understand terms like Sobornost, Piraten-Gogol and Gevulot, you just have to accept them. What works so wonderfully with Dietmar Dath is not that easy with “Quantum”. One or two explanations, less about the technology and more about the individual groups, would have been very desirable. This "show, don’t tell" writing style will work for some readers, I may be a bit too conservative. So I'm just as confused and disoriented as a thief without a memory should actually be - but far from it, Le Flambeur can quickly find his way around the oubliette. So it's definitely not stylistic devices.

Well, admittedly, you get into the action and gradually discover how the world of the future works according to Rajaniemi. Again and again I have to smile at the prefixed noun “quantum”, which is sometimes used inflationarily and which makes me think of Isaac Asimov's atomic punch and ashtray. Once inside, it is also possible to decipher individual pieces: Sobornost, that is a Russian Orthodox idea, according to which the interests of individuals and a larger community are identical, all with a view to a common goal, a common task. So far, so congruent. In Rajaniemi, the Sobornost members are like gods who can copy themselves infinitely often and are therefore everywhere at the same time, gaining infinite power by creating so-called gogols who perform different tasks. For example, being able to steal something. Sobornost can also "upgrade" people, as you can see in Mieli and le Flambeur: He gets a body that can be shaped more or less at will, it is a deadly fighting machine, complete with a built-in regulator for emotions and a fusion reactor in the thigh. Nice, but nothing more.

The oubliette and the associated social system as well as the gevulot, on the other hand, are understood quite well in the course of the novel, it is rather the larger contexts that remain closed to the reader at first. Gevulot is a kind of data cloud that meticulously safeguards people's privacy. It is not proper to reveal too much about yourself, nobody can see who is hiding behind the Gevulot. Everything that defines a person, appearance, memories etc. are contained in the Gevulot, which is a kind of exo-memory. After a certain lifetime, every citizen of the Oubliette has to be silent, he / she gets a new body and has to do certain work. And again after a certain period of silence, you can go back to the city, download your personality from the exo memory, the cloud, and life goes on. A chic idea in itself, not new, but good. The fact that the doors and gates are open to such a system of manipulation makes the whole thing even more interesting. This potential is also maxed out by le Flambeur, supported by all sorts of ominous sobornost stuff.

The plot remains exciting because you never really know who is who. Identity is constantly being played with, someone constantly reveals something without revealing it to the reader, who in the end has to figure out the secret himself. The protagonist's various double identities do not make things any easier, but they do make things exciting - this really calls for thinking.

Based on the character names, I had actually hoped to come across a little more classic Arsène Lupine stories, but “Quantum” disappoints that. Therefore, this colorful cracker made of technology blabbering, ego stealing and weird society is also lacking a bit of blood. Much remains incomprehensible, even further research does not reveal “Quantum” one hundred percent. But something sticks (certainly not the very wanted cliffhanger at the end) that makes the reader reach for "fractal" ...

A fairy tale from virus-infested nights 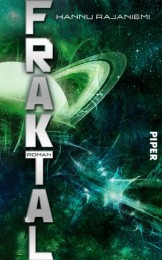 “Fractal” starts where “Quantum” left off: The thief sits with his prey in the spaceship and tries to do something with it. The Pellegrini, a godlike figure, has an assignment for him: he is supposed to steal an artifact that promises immortality. However, this is protected by the copied personality of another god-like being. He already knows how Jean Le Flambeur can get past the copy. But in order to put his plan into action, he has to go down to earth. The earth is a desert tried by Chaoscode, the largest city there is Sirr, an Arab fireworks display with quantum Djinnis, desert robbers and of course a princess, Tawaddudd. She is the daughter of a powerful businessman and is supposed to solve a murder, apparently in a parallel plot. As with “Quantum”, the same applies to “Fractal”: Nothing is what it seems ...

“Fractal” has charm, that's for sure. Well, you still have no idea who's in charge and you still swim a bit in the quantum sea of ​​foam, but the plot about Tawaddudd in particular makes up for a lot of things that didn't go so well in the first part. The princess, cast out by the family, complete with a dark past and a scheming sister, brings her own head with her, in contrast to the warrior Mieli, who had to sell herself completely to the founding goddess. Yes, she is charming, the "Djinn whore", just like life in Sirr, constantly threatened by a desert in which on the one hand treasures and riches are hidden, on the other hand also wild code that attacks people, disfigures them or even kills. Allusions to the myths about ghouls from Persian legends, the image of silent Bedouins who dare to venture into the dangerous desert to return with riches, bazaars, colorful, oriental hustle and bustle with cyberpunk approaches - that’s what I love. But maybe I'm just happy to be back in a place after the oubliette where I at least halfway know my way around.

Unfortunately, the romantic-Arabic setting is not enough to drag me over the full distance of 400 pages. For the most part, the characters do not grow fond of one, and so at some point while reading I realized that I was simply no longer interested in how the thief gets past God, who the murderer is and whether the princess will be happy in the end.

Not that I basically have anything against cerebral SF - on the contrary, I literally ate Dietmar Dath's “Pulsarnacht”, which was also criticized in many places as “illegible”. The difference is simply that Dath manages to keep you there, even if you have problems getting started with the new terms. But after just a few lines it is clear that a "Tlalok" is a kind of chip in the brain that provides its wearer with various extras. And that's exactly what Rajaniemi doesn't do: At some point you develop your theory of what you might be dealing with, but it always remains a vague theory. "Show, don’t tell" can be an interesting way of telling a story, but in my case it only turns into reading pleasure to a limited extent.

The nested and intertwined narrative strands are nicely done - I always admire the craftsmanship, and in this regard the author and editing department have done a great job. As always with texts like this, the question remains for me whether I'm just too stupid to come along or whether the text is just not that good? After all, Rajaniemi received the 2011 for the first part Locus Award as the best newcomer ...

The fact that “Quantum” and “Fractal” do not ignite with me is by no means due to the complex narrative style, but simply to the fact that at times I had no idea what it was all about, who was negotiating what with whom and how I imagine it all should. I felt rather helplessly thrown into a quantum tech VR universe, in which I absolutely cannot cope. And I'm far from sure that I'll really order part three of this series.