What is San Jose California famous for 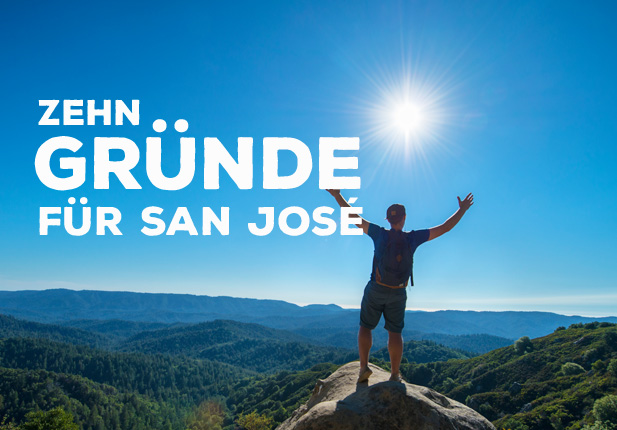 The third largest city in California is still something of an insider tip among German vacationers. It is the capital of Silicon Valley and, in addition to the famous high-tech and IT industrial center, has many exciting faces.

In San José you can combine city trips with nature holidays and bathing fun, which are the best prerequisites for a holiday destination. The city itself scores with a variety of cultures, great gastronomy, the relaxed Californian lifestyle, 300 hours of sunshine a year, the best shopping opportunities and lots of unique must-see attractions!

1. Good location
What makes a vacation in this region perfect is the proximity to top California destinations such as San Francisco and Monterey - both are about an hour's drive from San José. Monterey is also followed by one of the most beautiful sections of the Pacific Coast Highway. The 17 Mile Drive between Monterey and Carmel is an incredibly beautiful prelude to a trip along the wild and romantic coast of Big Sur, where you can watch not only surfers, but also one or the other seals and, with a little luck, even whales. Lake Tahoe (the largest mountain lake in North America) and the popular Yosemite National Park are around a three-hour drive east of the city.

2. Uniquely colorful
It is hard to imagine - not even for German city dwellers - that over 60 languages ​​are actually spoken in San José! From this it can be concluded that all these ethnic groups also brought their culture with them and that makes San José such a diverse place! Incidentally, there is one of only three Japantowns in the United States. Tip: go to the farmers' market here! A great experience! There is also the largest Vietnamese community living abroad in San José. Latin American and Polish influences are also clearly noticeable, not only at the Taco Festival and the Tahiti Fête de San José!

3. Pure nature
San José is surrounded by absolute natural beauty. There would be the mountains of the Santa Cruz Mountains with wonderful vantage points, there would be green, lush wine-growing areas in the hill country, there would be bright red poppies, but also forests with sequoias, next to which one looked like a dwarf. If you don't feel like going on a hike or are not good on your feet, it's best to take the historic steam locomotive through the forests with the tree giants! All of this is only a 30-minute drive from San José, e.g. in the Big Basin Redwoods State Park, Castle Rock State Park or Henry W. Coe State Park. Did we mention the dream beaches south of San José? Tip: take a look at the rock bridges at Natural Bridges State Beach!

4. Off to the future
The future is being tinkered with here! And that has been the case for many years. This is where the first Apple PC was created in 1976, on which Steve Jobs worked in his garage together with Steve Wozniak. And you can visit this garage, for example, as part of a tour. Then you will also see, for example, the garage of Hewlett and Packard, the HP founders. Of course, there are also many main branches of well-known IT companies here, e.g. Adobe, Apple, Cisco, Facebook, eBay, Google, Intel and Netflix. Tip: The Android Statue Garden at the Googleplex is very amusing, even for non-tech freaks! Many museums deal with the subject of inventions, IT and high-tech, such as the Computer Museum or The Tech, which is about the innovative strength of the valley and you can e.g. build a robot yourself. Fans of the electric automaker Tesla shouldn't miss the flagship showroom in downtown!

5. Good wine
Even if you are more of the beer type or have completely renounced the booze, a detour to the vineyards is worthwhile! Here you can, for example, have a nice picnic and enjoy the view. However, special wine trails show those who appreciate good wine where they can be found and tasted. Most of the good wineries with a long history are located near the Santa Cruz Mountains. The wines that are produced here are quite different, because different types of grape can be planted due to the different soils and microclimates. Tip: visit the Ridge Vineyards in Cupertino. Your Monte Bello Cabernet Sauvignon, born in 1971, achieved fifth place in the Paris wine jury five years later. This not only contributed to the fame of the winemaker, but the valley and the state also benefited from the high award.

6. Breathe in the big city air
Even if San José is the third largest city in the state, many of the charming quarters and even downtown have a cozy atmosphere that invites you to linger. It's clean, it's lively, but by no means turbulent and hectic as we know it from other metropolises. Santana Row comes highly recommended here. There are pretty boutiques, fancy shops, nice cafés and good restaurants and the Tesla showroom mentioned above - all slightly shaded by trees and palm trees that adorn the shopping street. The market is held on certain days of the week and there is live music on Wednesday evenings in July.

7. Good cuisine
As you can already imagine in view of the many different cultures in San José, the gastronomic diversity is also absolutely there. From authentic Japanese and Mexican restaurants to solid American burgers and steaks to the excellent Portuguese: every visitor is sure to find their favorite restaurant in San José. Incidentally, the Adega is that Portuguese restaurant. It earned its first Michelin star for San José last year. In the USA there is only one other Portuguese restaurant that can boast a star.

8. Sporty
Hip and body-conscious, as the young Californian is, there must of course also be a track for skaters. Yes, but not just any boring half pipe. No, it is the largest skate park in the state, where the boards are chased across the course and learn to fly every day. Football and ice hockey are also very popular. The San José Sharks play in the National Hockey League (NHL) and were even in the final of the Stanley Cup last year. Home games take place in the SAP Center and are of course accompanied by S.J. Sharkie, the mascot. The San José Earthquakes are sockers in the Major League, which is the equivalent of the first Bundesliga. This month there was a friendly game with the eagles of Frankfurter Eintracht. Incidentally, your stadium has the largest outdoor bar in North America. Nice!

9. Discover and invent
There is a lot to discover in San José, especially in the city's unique museums. As you know from the USA, these are also totally entertaining and mostly interactive, especially the Tech Museum of Innovation. Here you can, for example, simulate an earthquake and design a robot. The Children's Discovery Museum is also highly recommended. The art museum is also fresh and modern by taking up the idea of ​​innovation and promoting creativity and networking among visitors. We have already mentioned the Computer Museum. And where would it fit better than here, where our modern helpers were developed ?! Those who prefer things less hip and more traditionally crafted may find what they are looking for in the Museum of Quilts & Textiles, where you can learn more about weaving. The most popular, at least according to a survey by the Internet portal Yelp, is the Rosicrucian Egyptian Museum, which has the largest exhibited collection of Egyptian artifacts in western North America.

10. Here you can live
As a tourist - if you pay attention to it - you can feel that most people are fine here. The more the locals prefer to live here, the better the atmosphere for holidaymakers. And that is demonstrably so. San José is the city with the highest median income per household in the United States, making it the richest city in America. Life is pretty good here (3rd place in the U.S. News & World Report this year in "Best Places to Live"), and it's also the third best city for raising children. More than half of those who work in Silicon Valley have college degrees. Sounds nice, doesn't it? This is probably one of the reasons why more and more people are choosing to live and work here, which doesn't make the city with co-working spaces difficult. You can, for example, simply rent a desk, which simplifies the exchange with people sitting next to you and the networking. Welcome to Silicon Valley!