How osteoclasts break down bones

The bone is in a constant process of building, dismantling and remodeling, so that every person receives a completely new skeleton almost every 7 years. A person who is 84 years old has "changed" his skeleton 12 times.

The human bone is so dynamic because the skeleton has to constantly adapt to new conditions. A good example of this are the braces, which allow the teeth to be repositioned by pressing the roots of the teeth on the jawbone. Bones stressed by exercise, exercise and weight become thicker and stronger. Bones that lack exercise and stress become thinner and weaker. 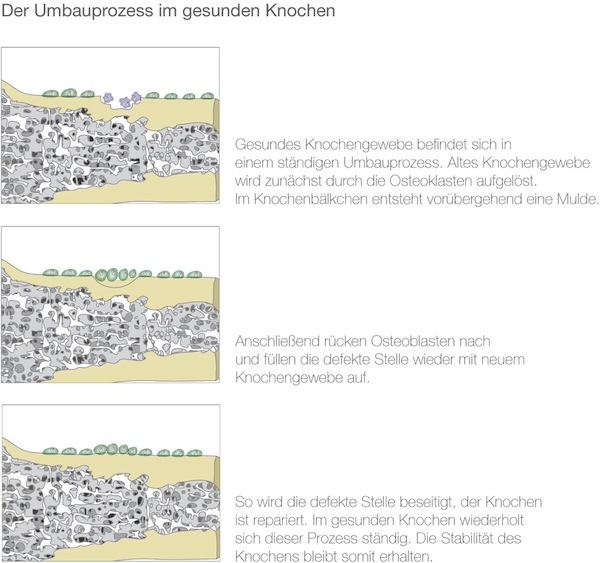 But how does the bone accomplish such remodeling measures? The bone substance itself consists of two materials: the connective tissue, which is responsible for the flexibility of the bone, and the mineral part, which ensures the typical strength of the bone.

The following example from road construction helps to better understand the function of the cells that break down and build up bones (osteoclasts and osteoblasts): Everyone knows that after a severe winter there can be a considerable increase in potholes in the asphalt of the streets. In order to remedy this situation, ideally the defective part of the roadway is first removed in the spring and then filled with fresh asphalt in a second operation.

Bones work in a similar way, because there are not only natural remodeling processes, but also defects that can arise from overload, accidents and incorrect movements. These micro-fractures (microfractures), which must not be confused with typical bone fractures, trigger repair processes in the bone: the osteoclasts break down the defective bone in the area of ​​the microfractures and the osteoblasts build up new, stable bone. The cooperation of the bone cells is perfectly coordinated. 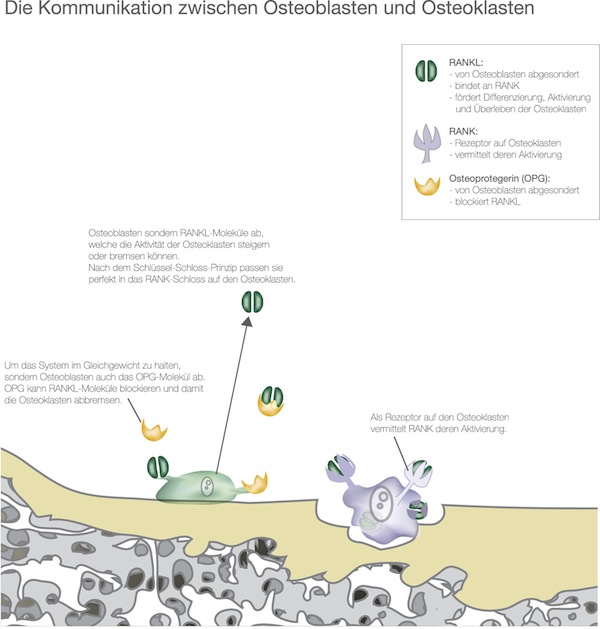 Own language of the osteoclasts and osteoblasts among themselves

Osteoblasts play an important role in bone metabolism. They produce substances with which they can increase or slow down the activity of the osteoclasts. The key substance is called RANK ligand or RANKL (the name is an abbreviation from cell biology), a molecule that fits into the RANK “lock” on the surface of the osteoclast. By releasing RANKL, osteoblasts can activate osteoclasts.

But so that the entire bone processes do not get out of balance, the osteoblast produces another signaling molecule called osteoprotegerin (OPG). OPG can intercept the RANKL and thus stop its effect. This process slows down the activity of the cells that break down the bone, the osteoclasts.

If the finely regulated cooperation between osteoclasts and blasts is disturbed by disease, bone health is also affected. A well-known example of this is osteoporosis. In this disease, the osteoclasts work far faster than the osteoblasts can. The result is the frequent bone loss (osteoporosis, osteopenia) in old age (mostly in women after menopause), which can lead to fractures and disability if there is a significant loss of mass.