Dogs or cats are easier to own

Dog or cat? - How this question ended in heated discussion.

And now completely non-objective - the question of all questions: cat or dog?

So is it a good thing that more cats than dogs are kept as pets in Germany? Opinions are divided on this question. Some find the fewer cats the better. Others think: every dog ​​is one too many.

And that brings us to the topic. I promised the reader an argument. Here it comes. Read here the - not very seriously meant - verbal battle of the titans on the subject of "Who is better: dog or cat?" 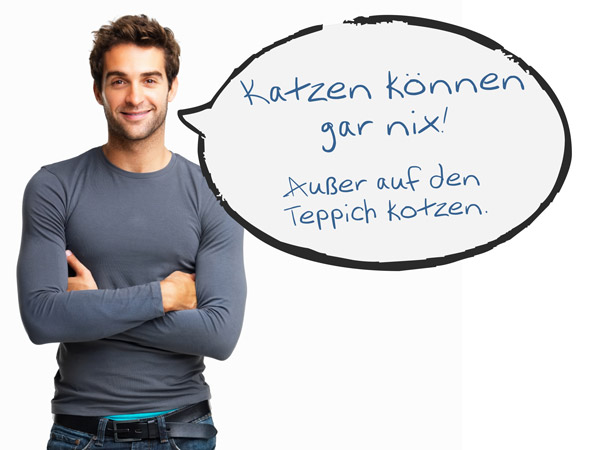 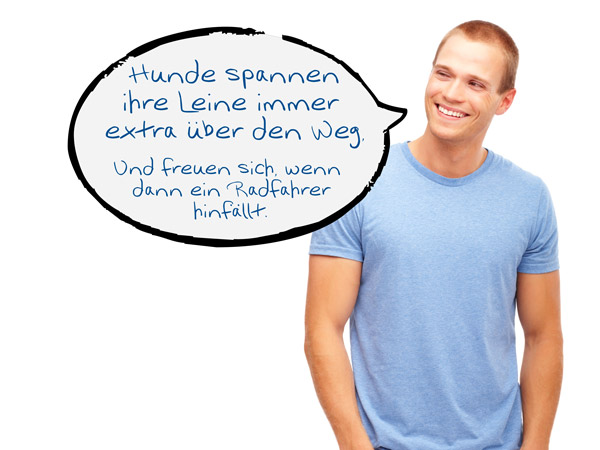 "Cats are heartless pigs.", The canine colleague begins his plea for the dog with chosen words. Cat friend countered cleverly: "Cats have cuter names for that!" The game is on.

In the following you will find the best of the blows between dog and cat lovers. Sorted by topic.

Per dog: "The dog is happy when you come back, the cat doesn't care!"

Per cat: "Cats just don't let everything do with them. How boring it is when someone always listens to you. Dogs are the yes-sayers of the animal kingdom." 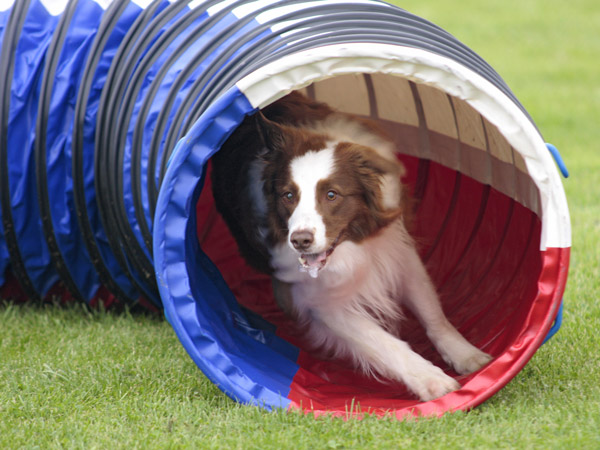 Per cat: "Dogs stink, they can't get their personal hygiene on the line. People always have to go to the hairdresser with them, they shower and clean their paws after the rain. Cats do it all by themselves. There are no smelly cats that get wet into the apartment come and shake yourself in the middle of the room. "

Per dog: "Yes, and cats don't do anything else for that! They just clean themselves and get on other people's nerves. The only thing the cat does is, it pukes and says to you: Get away! Dogs can do a lot more. Or have." Have you ever heard of avalanche cats? Police cats? Drug-sniffing cats? " 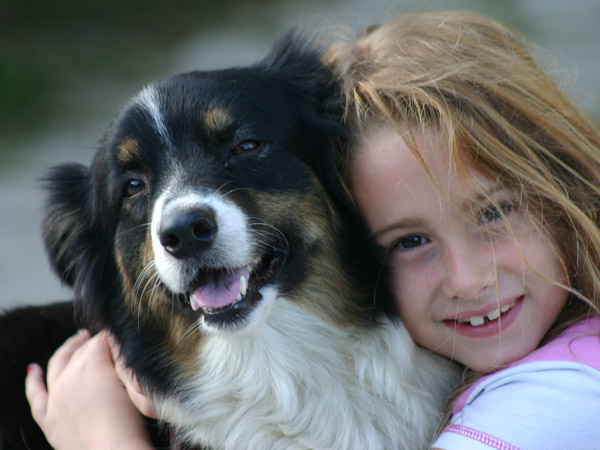 Per dog: "Dogs are loyal friends. When things get serious, the cat will char you in the burning house and save its own fur."

Per cat: "Well, cats just have a sense of irony. They notice when you don't like them. They are especially attentive to people and jump straight onto their laps. By the way, they do the same with people who are allergic to cat hair."

Per dog: "Cats get run over by the car."

Per cat: "But they have nine lives and always end up on their paws. The dog is dead instantly."

Per dog: "By the way, my mother still suffers from nightmares because my uncle threw the cat out of the skylight to check it out." 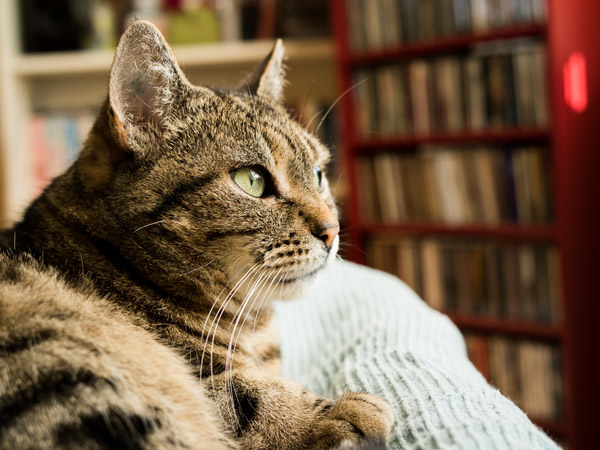 How nice it is on the sofa!

Per dog: "Cats always come and get on your nerves, meow when you don't need them. If the cats were lying on my grandmother's couch, there was no room for the grandchildren. And if you did sit down, the cat would have you on loved to be pushed off the couch. "

Per cat: "And dogs stand next to you and lick your face, your hands and your arms. They do this with their tongues, with which they were not only on their own bums before, but also on those of all the dogs they meet during the day have already met that way. " 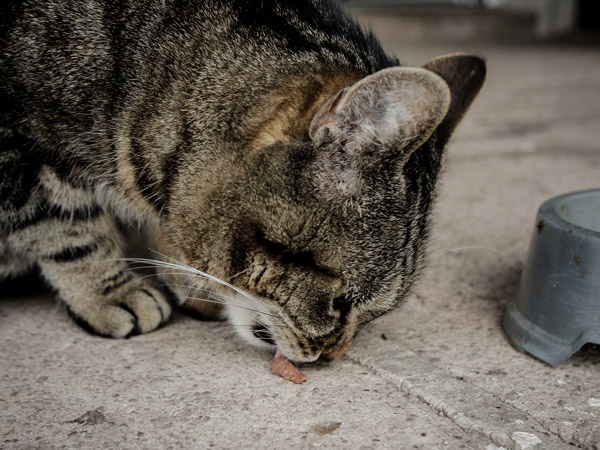 Feed? The cat catches itself.

Per dog: "To do this, cats drag dead animals into your house. So ideally dead. Sometimes the mouse runs behind the closet when the cat opens its mouth. And then?"

Per cat: “Cats are just independent and catch their own food. And speaking of food. Have you ever thought about what a dog eats? An Irish wolfhound eats more than you and I together. Cats are small and easy to care for. "

7) Danger to life and limb

Per cat: "Dogs go into the forest to set insidious traps for people there. They stretch their leashes over the forest path so that you can get caught on your bike. And when jogging you have to be careful not to step on such an animal."

Per dog: "As if cats weren't dangerous. I'm just saying limb amputation after a cat bite."

So there you have it. The fronts are hardened. And that is no accident. It seems that each group has their own reasons for hating dogs and cats.

The generations of cat enemies - cats spoil the harvest

Cats are the enemy of entire generations. In times when food did not grow in the supermarket but in one's own garden, every disturbance was perceived sensitively. Regardless of what has been dug up, eaten or uprooted in the garden, for my grandpa it is still “the cats” to blame - or “the slugs”, that is the gardener's second enemy. 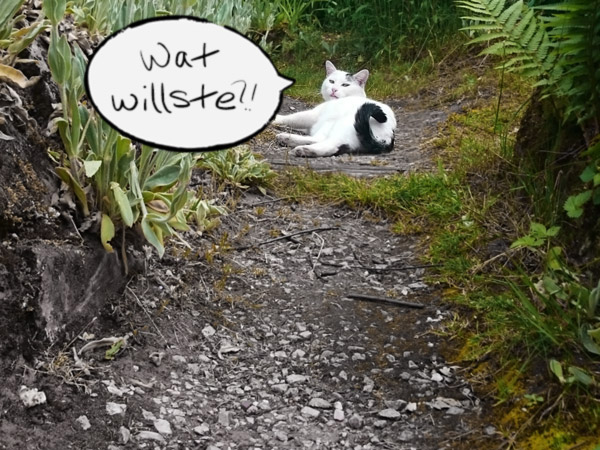 This is how the cat flattens the garden.

Please note that this is not a specific cat, but a general one the cats. So all cats. Out of sheer malice, they dig up every vegetable garden that comes under their paws in packs. Only after they put a pile on the radishes, of course.

Since cats, unlike slugs, cannot be drowned in a beer bath or poisoned with blue grains, my grandpa put an electric fence around his garden. It is supposed to keep cats with electric shocks from doing their business between his heads of lettuce. After all, he thinks she is intelligent enough to stay away from the garden after the first power surge. That probably sets them apart from the nudibranchs. 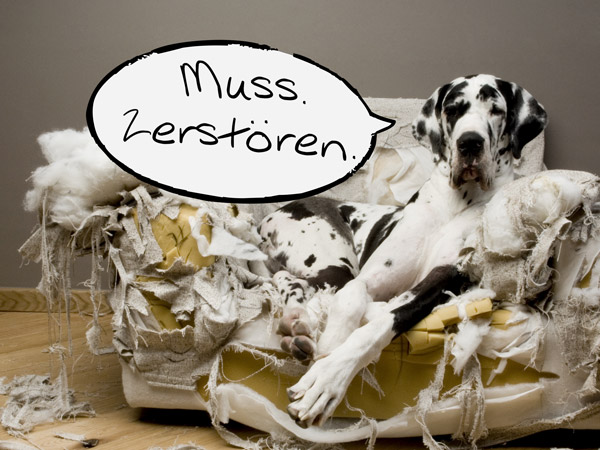 Dog with a blind destructive rage

In the case of dog-hating colleagues, the aversion seems to continue from generation to generation. His father's advice "Don't trust a dog!" he should have taken heed better. Because he dared to ride his bike through the street at the tender age of 7, he provoked the neighbors' calf-biting dog, who insisted on tearing a piece of skin from his leg. It was like his father before him and his grandfather before that.

Above all, his grandfather had quarrels with court dogs and guard dogs, who temporarily worked as a postman - and was therefore predestined in the most dog-hostile job to get into each other with one or the other dog.

It would have gone on forever if the lunch break hadn't reunited the brawlers. With a chocolate biscuit in hand, peace was restored ..

You see, solving the dog and cat question is not that easy, if not impossible. Whatever the case in life, the following applies here: Remain tolerant! Everyone has their opinion, their quirks and their animal preferences. It is even rumored that there are people who find cats and dogs almost equally good. I speak from experience...

I tend to be a cat person myself. It should be said, however, that this was not always the case. As a child, I clearly liked dogs. I found dogs cool and funny. I didn't care about cats. I found cats all the same. And most of all, I found them all equally vicious. This assessment resulted - probably not entirely unjustified - from the tearful encounter with a scratchy cat that I once had an argument with as a child. But as it is: Over time I have forgiven cats and cats in general. With the result that now that I have grown up, I have decided to have a cat as a pet. Admittedly, the decisive factors for this were time and space reasons. Having a dog would have been too much of a hassle. 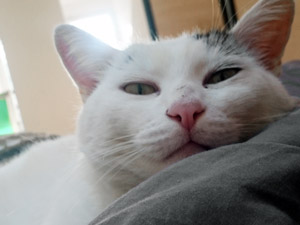 This is what the morning looks like with a cat

Now I live with a smug cat who scratches out of the blue, is ambushed, bites my leg, brings animal carcasses into the house and loves to throw up on the living room carpet. That, together with the cozy hours on the couch, purring and drooling with delight (the cat), I wouldn't want to miss anymore.

And I'm sure every dog ​​owner feels the same way when he is kissed lovingly by his wet, smelly dog ​​after a walk at 6 a.m. 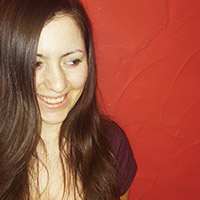 The author of this column unintentionally got caught between the fronts of the cat and dog lobbies in the office. She is happy that things have smoothed out again and speaks out in favor of more tolerance between dog and cat people (even if she shares the house with a cat herself).