Methyl propanoate is soluble in water

Carboxylic acid esters are organic compounds with the following structure: 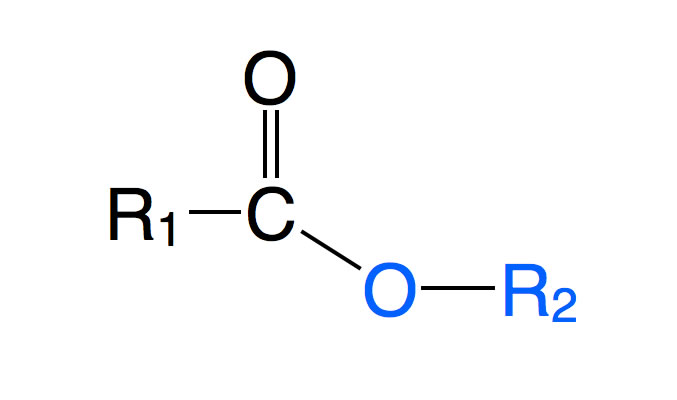 An organic radical R is located on one side of a carbonyl group C = O1, for example a methyl or an ethyl group, and on the other hand an alcohol radical -O-R2, for example ethanolate (-O-C2H5).

A carboxylic acid ester is formed by the reaction of an alcohol with a carboxylic acid with the release of water (condensation is a reaction in which two molecules combine to release water): 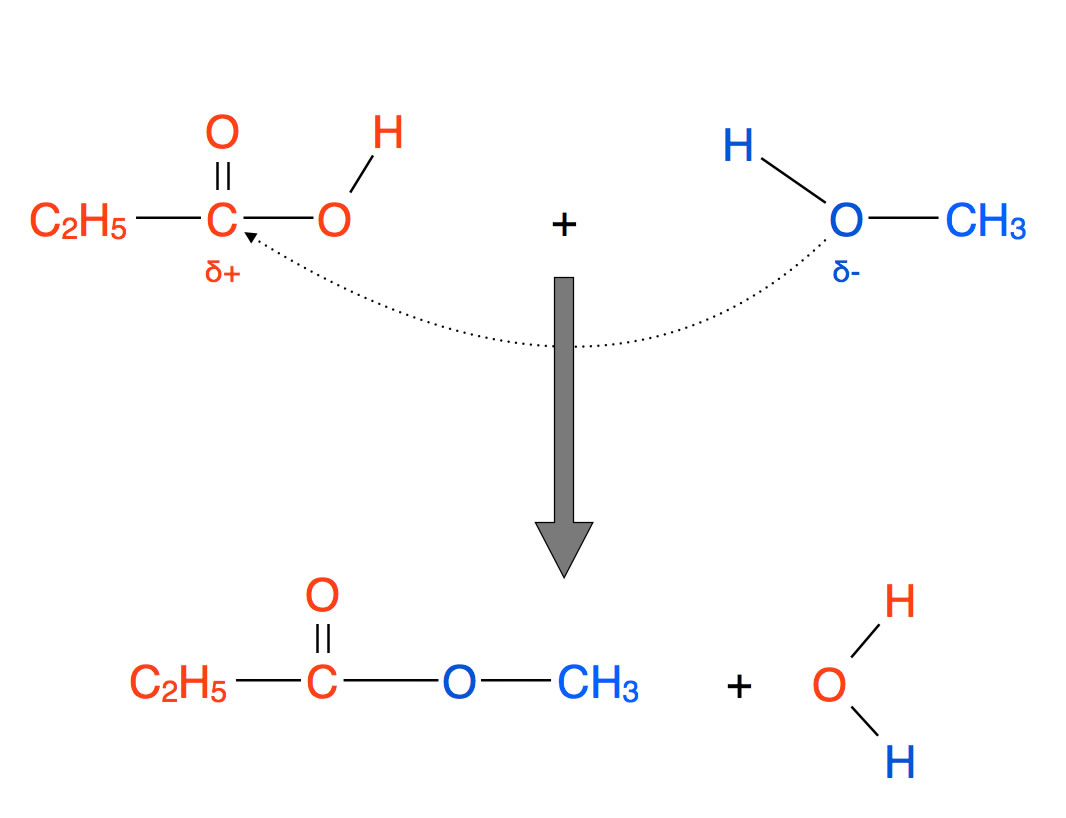 Formation of an ester

Alcohols with more than one OH group can also form polyhydric esters. Fats and oils are, for example, esters of the trihydric alcohol glycerine. A glycerine molecule is esterified with three fatty acid molecules, which is why we also speak of triacylglycerides or triglycerides for short. Fatty acids are monocarboxylic acids with many carbon atoms (fatty acids with 18 carbon atoms are often found).

Nomenclature according to the IUPAC rules

If you want to name an ester "according to the rules", you put the alkyl radical of the alcohol in front, and then the name of the acid radical is given. An ester made from propanoic acid and butanol is then called butyl propanoate. An ester of acetic acid and methanol is called methyl acetate or - even better - methyl ethanoate. No wonder that the colloquial terms such as methyl acetate are still used.

In the laboratory, esters can be easily produced by adding a few drops of concentrated sulfuric acid to roughly equal amounts of carboxylic acid and alcohol and then gently heating them in a test tube. Incidentally, this is a popular student experiment in which you can produce interesting smells.

Mix the following carboxylic acids and in one test tube each
Alcohols:

After you have labeled the test tubes and filled them with acid and alcohol, leave 1 drop of conc. Add sulfuric acid. Add a boiling stone and then heat in the fume cupboard over a low flame for approx. 2 minutes to boil.

Then pour the contents of the test tube into a beaker filled with 200 mL of water. In your observations, pay particular attention to the smell of the ester that forms.

You can also react with other alcohols and acids from the chemistry collection. But since you never know how dangerous the resulting esters are, the tests should always be carried out under the hood.

Carboxylic acid esters are found in many natural and artificial flavorings. The esters that occur in fruit flavors have a maximum of 7 carbon atoms in both the acid and alcohol content. A nice overview of different fruit flavors can be found in Wikipedia.

As mentioned above, esters are not only found in flavorings, but also in many other important biochemical compounds such as DNA, RNA, ATP, GTP and fats and oils. The important triglycerides are, for example, esters of the trihydric alcohol glycerine with three fatty acids.

Esters are often used as solvents for non-polar organic compounds, especially for adhesives, paints and varnishes. Hard and brittle plastics are also easier to deform if esters are added to them as plasticizers.

If one looks at the molecular structure, the experienced observer immediately recognizes that ester molecules cannot form hydrogen bonds with one another. There is no H atom in the molecule that is bound to an electronegative O or N atom, all H atoms "sit" on C atoms. The boiling points of the esters should therefore not be too high, for example in comparison to alcohols or carboxylic acids of comparable molecular mass. Let's check that out briefly.

Let's take the famous ethyl acetate, which is composed of acetic acid and ethanol, as an example. The compound has a molecular weight of around 88 g / mol and a boiling point of 77 ºC.

An alcohol with a comparable molecular weight is pentan-1-ol. This compound also has a molar mass of 88 g / mol and a boiling point of 138 ° C.

A carboxylic acid with a comparable molecular mass is butyric acid or butanoic acid. Butyric acid again has a molar mass of 88 g / mol and a boiling point of as much as 163.7 ºC.

So we see that at least this example confirms the statement made above, so that esters have significantly lower boiling points than alcohols or carboxylic acids with the same molar mass.

Ester molecules have two electronegative O atoms with lone pairs of electrons. So you are able to form hydrogen bonds with water molecules. It is therefore to be expected that carboxylic acid esters, which consist of short-chain acids and alcohols, are water-soluble. The longer the acid or alcohol residue, the less water-soluble the esters should be.

We now want to check this assertion as well. Let's start with the simplest carboxylic acid ester, methyl formate. Believe it or not, 300 g of this short-chain compound dissolve in one liter of water, although some of the ester molecules are broken down again into formic acid and methyl alcohol (hydrolysis).

Let us conclude our investigation with the acetic acid propyl ester. This compound, which consists of five carbon atoms, has a very low solubility in water of only 21 g / liter.

Because of the electronegative O atoms, carboxylic acid esters are in principle readily soluble in water. However, the water solubility decreases significantly with the number of carbon atoms.

Probably the most important chemical property of carboxylic acid esters (at least for chemistry classes) is the fact that they can easily be hydrolytically split into their components. The ester synthesis is thus reversed. Not completely, however, only partially. The synthesis of an ester from a carboxylic acid and an alcohol is a typical equilibrium reaction. For this reason, the ester synthesis is also often treated in the EF stage, namely when the subject of "chemical equilibrium" is dealt with.

However, esters can also enter into reactions other than hydrolysis. Ammonolysis is an example here. In principle, ammonolysis takes place in exactly the same way as hydrolysis, except that instead of water, H becomes2O ammonia NH3 used.

Comparison of hydrolysis and ammonolysis

Instead of ammonia, an organic amine H2N-R are used, one then speaks of an aminolysis. Alcoholysis is also a reaction of the esters. The alcoholysis also proceeds like the hydrolysis, only here an alcohol R-OH is used instead of water. 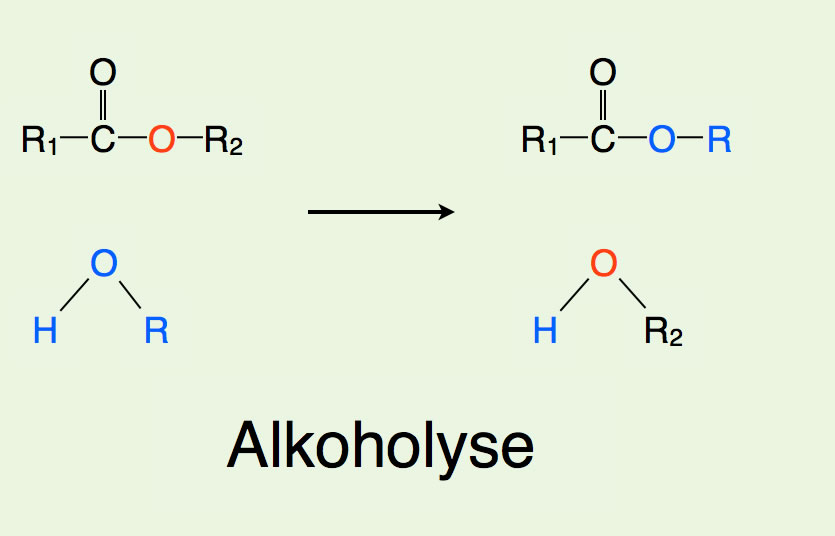 Alcoholysis of an ester

It is interesting that a new ester and a new alcohol are created during alcoholysis.