The company Zero Motorcycles was founded by motorcycle freak, aircraft designer and pioneer Neal Saiki - initially under the name Electricross - near Santa Cruz in Scotts Valley, California from the tradition of the Californian technology industry. At that time, there was no mass-produced electric vehicle on the market, either a car or a motorcycle. (The documentary “Why the electric car had to die” had just come out.) The powerful machine with a weight of only 64 kg brings pure thrills while driving and is far ahead of its time. A copy of it hangs proudly in our production hall. 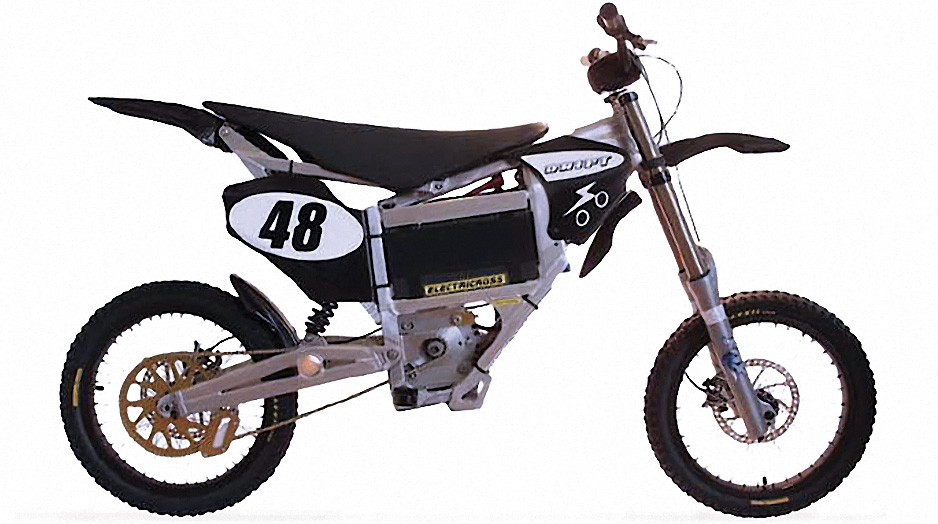 With the enthusiasm for the new Drift growing, Electricross opens a modest storefront in Scotts Valley, California on June 11th. 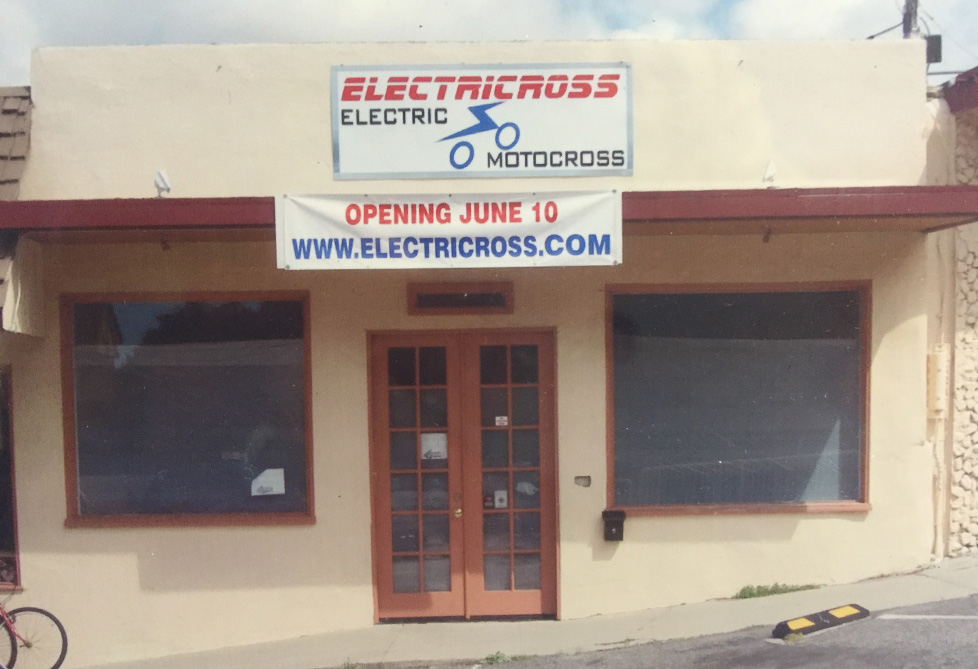 The classic logo is introduced and the motto “Zero Emissions” is highlighted.

Zero Motorcycles focuses on off-road motorcycles and sees this as the best chance to gain a foothold in the motorcycle market. Even if the motorcycles neither have a high top speed nor an extensive range, the electric drive is already powerful and quiet and opens up completely new possibilities. 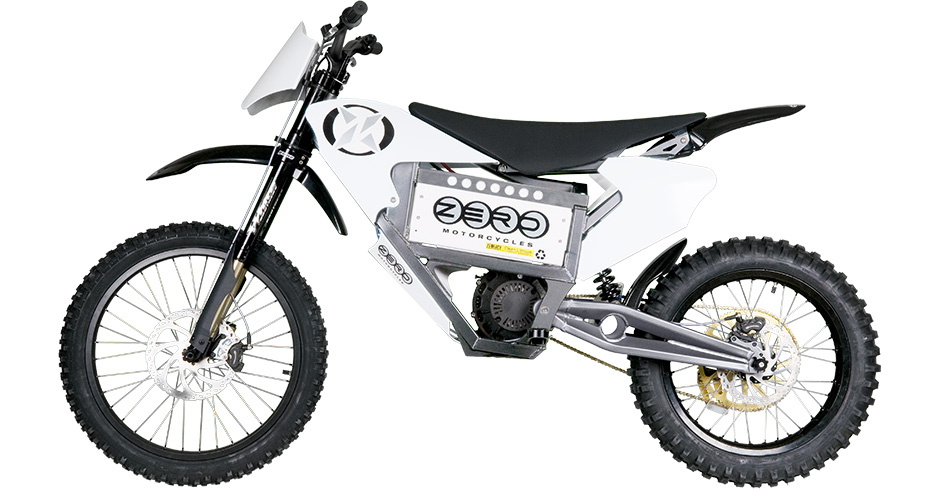 Zero Motorcycles moves to a new building in Scotts Valley, California and now employs 25 people. There are only two offices, one for the founder and one for the CEO. The production is right next to it. The increasing momentum developing around Zero Motorcycles leads to the partnership with our main investor who has fueled the company's growth to this day. 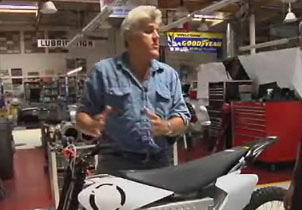 It was only a matter of time before comedian Jay Leno, known for his vehicle collection, decided to test drive a Zero. He then called the Zero X the "future of motorcycling" and said, "You could even drive through a bird sanctuary without disturbing anyone." 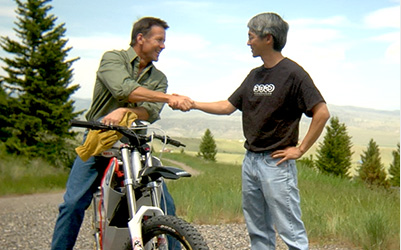 James Denton, star of the series “Desperate Housewives”, is visited by company founder Neal Saiki and drives a Zero X at his cabin in Montana. “You can only hear the gravel up here,” he says. "That is great, an unbelievable power."

The 24-hour Electricross takes place in an off-road motorcycle park in the middle of San Jose, the world's first off-road event for the endurance test of completely electric motorcycles. We invite customers, employees and the press to take part in the competition. The atmosphere is electrifying in the truest sense of the word. Ten teams compete and they all reach their destination. It's a stunning example of the endurance electric motorcycles can offer. The winning team manages a dizzying 1,015 laps, 808.1 km and sets a world record in this discipline.

The Zero S is the first mass-produced, electric street motorcycle. Even if the range and top speed are limited to 80 km and 97 km / h, the motorcycle is a world first. The Zero S with a completely new chassis and new fairing is quickly followed by the release of the Zero DS, for everyone who wants to drive off-road with an approved road vehicle. "These were the first ever series-produced motorcycles," says Abe Askenazi, Chief Technology Officer and Product Manager, who moved to Zero from Buell Motorcycles.

Zero Motorcycles drives to the Anza-Borrego Desert in California to test new off-road models and sets the starting point for a long tradition of testing at widely scattered locations. Soon our steadfast research and development team was to travel to Death Valley for hot country testing, to Oregon for extensive wet test drives, and to Pismo Beach for use in sand and salty conditions. From there, the Zero “destruction crew” went on to torture our motorcycles in Baja California, ride the Rubicon Trail in the Sierras, and introduce the tradition of weekly trips to the local off-highway vehicle fleet at Hollister Hills. Hard work guys ...

Zero Motorcycles teams up with Agni Motors and wins the first TTXGP eGrand Prix for electric motorcycles at Sonoma Raceway in California with driver Sean Higbee. With the hiring of Kenyon Kluge (now Director of Electrical Engineering), the company is also gaining a huge racing stature. In addition to his skills as an electrical engineer from nearby Silicon Valley, Kenyon is a nationally listed road racer and former champion of the AFM 750 category on motorcycles with internal combustion engines. It doesn't take long before he proves his skills as a representative of Zero Motorcycles and wins the first TTX75 electric motorcycle race on a Zero from the production base. He also dominates as a driver at the follow-up event, eSuperstock. "I've always believed that there is no better test than racing," says Kenyon. "So we took every chance to take part in races." 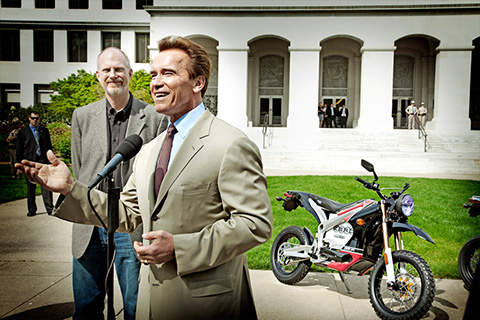 Throughout its history, the Zero Motorcycles brand has had the honor of being endorsed by many athletes and personalities. One of the first was former California Governor Arnold Schwarzenegger. At a ceremony in the state capital of California, the Terminator and passionate motorcyclists will introduce the green benefits of electric motorcycles and the new state incentive program to promote their use. 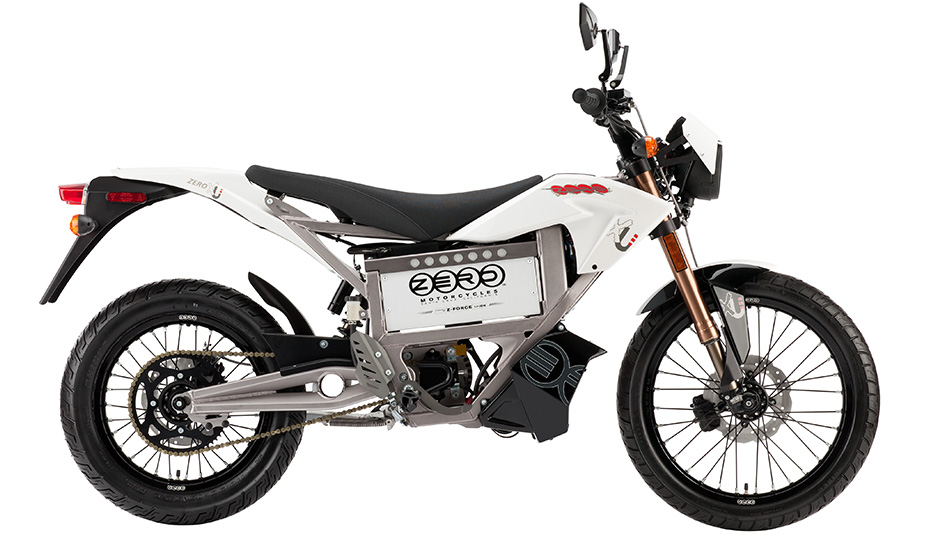 The Zero XU is introduced as the ultimate city commuter model. It is our first street motorcycle with a removable battery that city dwellers can charge outside of the motorcycle. A “quick charge” accessory is also being introduced while the range and performance limitations of the Zero S and DS models are continually being improved. 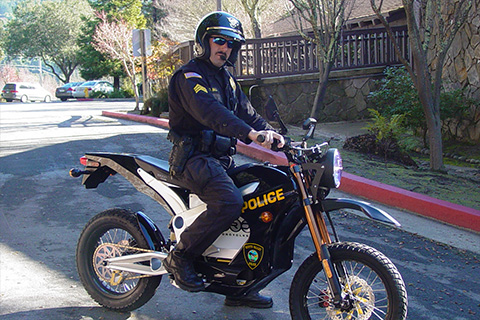 It wasn't long before police discovered the benefits electric motorcycles had for general safety, event security, and crowd control. Without gearshifts, clutches or noises, zero motorcycles are the ideal patrol vehicles. Our local Police Department in Scotts Valley, California was the first in 2011, and today over 80 police and park agencies across the country use Zero motorcycles in their daily work. And we pride ourselves on supporting them in their ministry.

This year represents a giant step forward in almost every respect. For the first time, the range for city trips has reached a three-digit number: 183 km. This success is thanks to a new battery technology that uses "pouch cells" instead of cylindrical cells. At the same time, the battery life (based on charging cycles) can now last an entire “motorcycle life” without any problems. The motorcycles herald the arrival of a “brushless” motor as well as a simple and reliable controller. Cast wheels are used for the first time and the wheels have a completely new styling. Many elements of this technology are still in use today.

Zero Motorcycles orders more than 50 dealers in North America alone. Many of them are among the top 100 multi-brand retailers and are known as the most professional and future-oriented retailers in the industry. 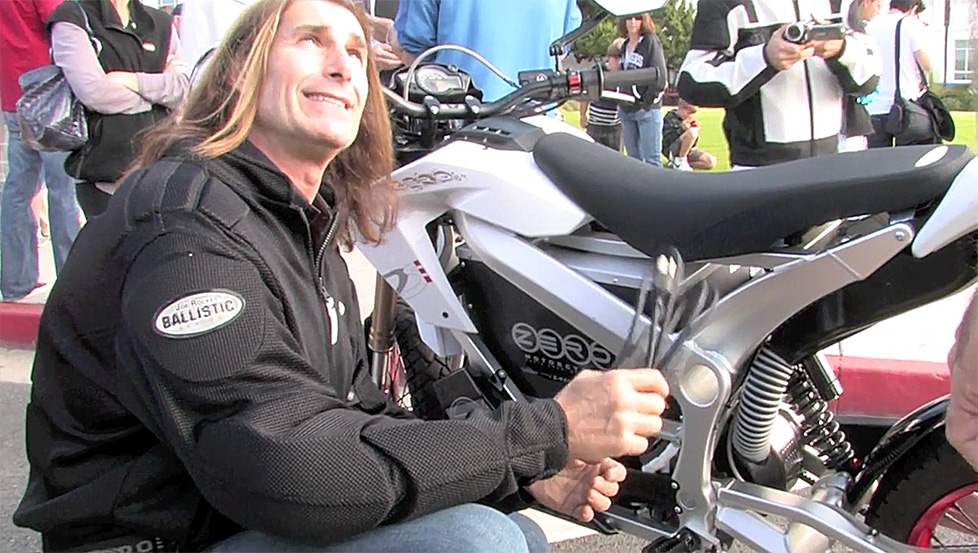 Who knew that Fabio - photo model, actor and star of the margarine commercial: "I can't believe it's not butter" - is an avid motorcyclist and electric motorcycle lover? He added a Zero DS to his already extensive motorcycle collection. He will also become the spokesman for the US electric vehicle advocacy group, Plug In America. 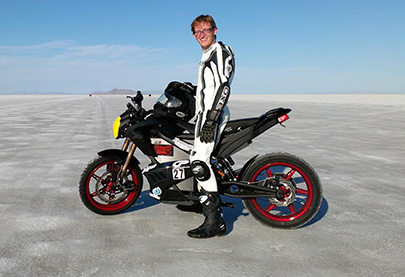 Of course, because of their noiselessness and speed, Zero machines are also used for covert military operations. Special military motorcycles generally have custom tires, military features, and replaceable batteries. We could tell you more, but then we would have to kill you.

Almost noiseless, inexpensive to maintain, zero emissions - imagine all of these options when patrolling cities. Police officers in Bogotá and Hong Kong are now driving a fleet of Zero S and Zero DS police motorcycles through their streets. 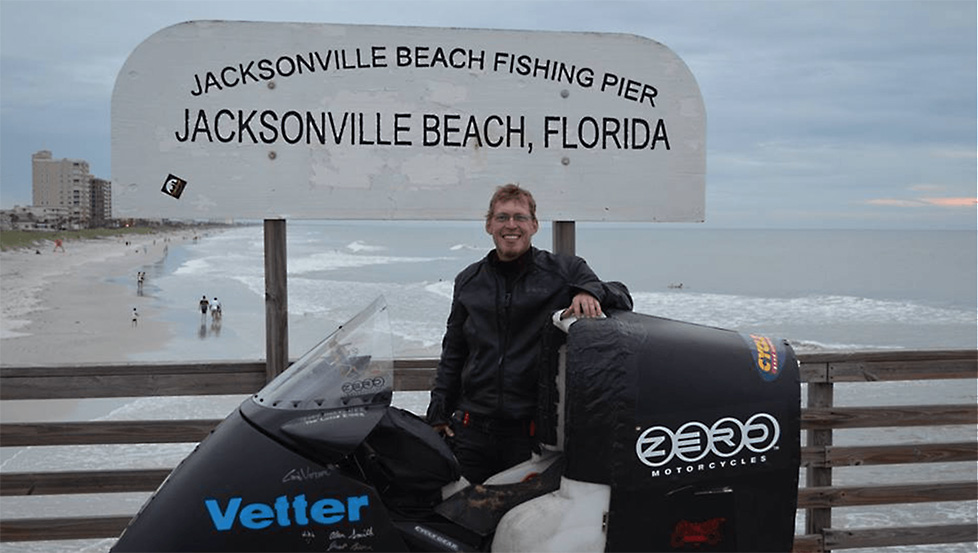 Terry Hershner, aka Electric Terry, is the first motorcyclist to venture out on a long overland ride on an electric motorcycle. In five days or 135 hours he drives from San Diego, California, to Jacksonville, Florida, without a support team, using only the existing charging infrastructure. Terry becomes the steadfast product tester for Zero Motorcycles and sets numerous endurance records, such as an "Iron Butt" (1,600 km in one day). Even today he can often be seen near our Scotts Valley offices when he's on tour with his dog Charger.

With the introduction of the “cell housing” as a battery structure as it is used today, zero technology is taking a huge leap forward. The system enables a single battery to be used as a "basic module" for each motorcycle model, also for models with replaceable (modular) batteries, or the capacity can be changed (with three or four "modules"). The complete zero drive system is optimized to 102 volts. A new, self-developed and patented, powerful, air-cooled motor is introduced as well as a Bluetooth app that allows the user to set performance parameters individually via smartphone. 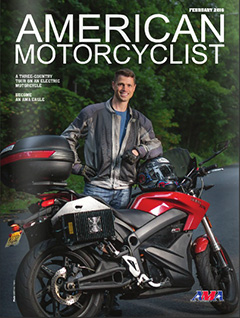 Ben Rich is the second rider to cross the United States on an electric motorcycle. He's 7,200 miles from Charleston, South Carolina to Google's Mountain View, California headquarters. For Ben, this is the beginning of annual journeys over mega-long distances: in 2014 he will be driving a loop of 9,600 km with the end and start point in New York City. In 2015, his 11,250 km loop takes him from New York City to Florida and via Mexico and Montreal back to New York. The latter appears on the cover of "American Motorcyclist" magazine. 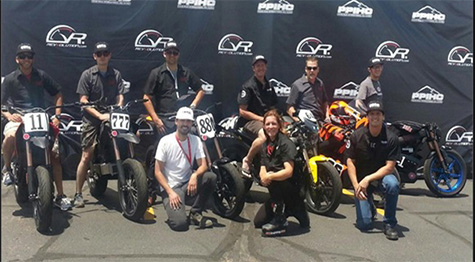 For the first time, electric motorcycles are taking part in the famous Pikes Peak International Hill Climb. Electric vehicles are at the right place in the relentless “Race to the Clouds” that takes place every June in Colorado, because they show no loss of performance in the thin air at 4,270 m. Zero Motorcycles and prominent distributor Hollywood Electrics team up and win the opening race in the production motorcycle class, which they repeat every year from then on. 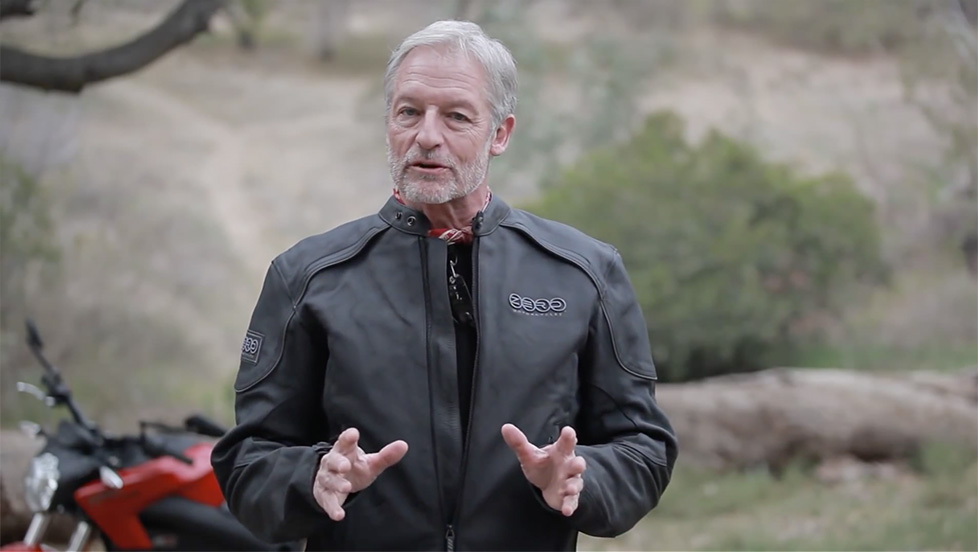 The most powerful Zero model, the Zero SR, now offers 144 Nm of torque. This astonishing number is only trumped by a few production motorcycles of whatever type. It also accelerates from 0 to 100 km / h in just 3.3 seconds and has a top speed of 164 km / h. We are also introducing the Power Tank accessories for a significant increase in range.

Zero Motorcycles is marching straight onto the mainstream motorcycle market with new high-quality items such as Pirelli tires and fully adjustable Showa suspension. For the first time, series-produced electric motorcycles approved for use on the road will be equipped with Bosch ABS braking systems as standard, thereby achieving a very high level of safety and control. 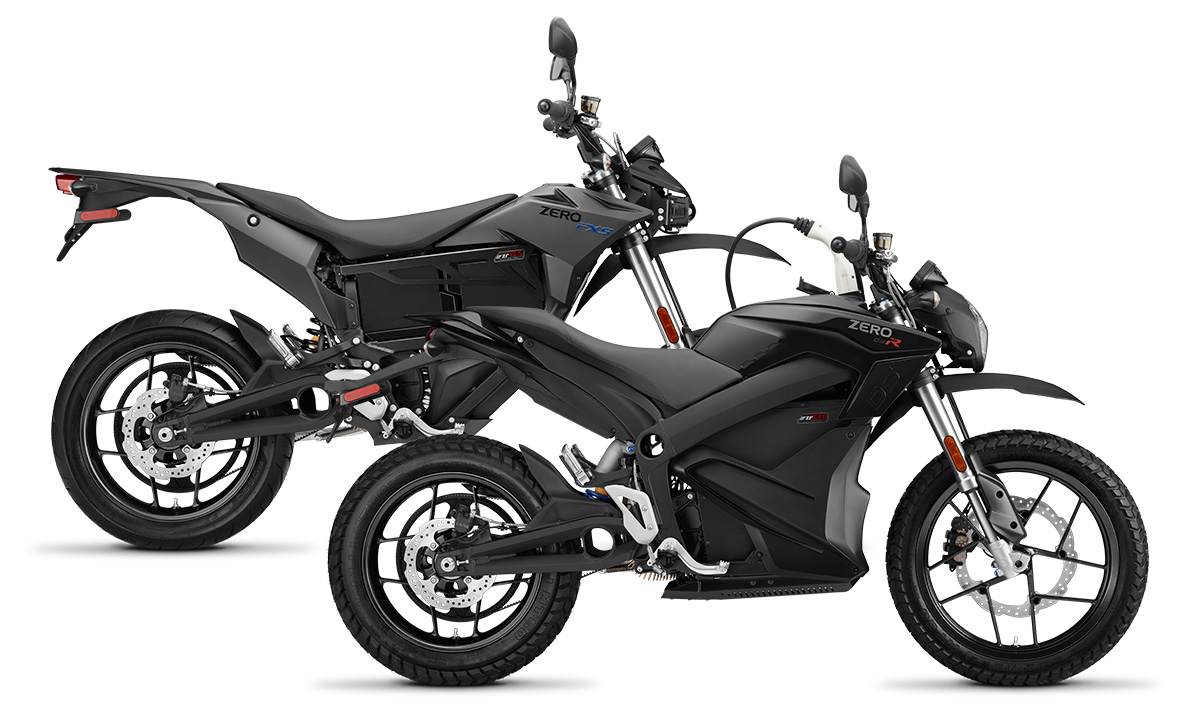 With the introduction of the Zero FXS, Zero Motorcycles is banking on the rising trend towards “Supermoto”. With a weight of less than 140 kg and a torque of 95 Nm, the machine transforms ordinary streets in the city into an urban adventure playground. Another new model, the Zero DSR, offers a torque of 144 Nm and can be used anywhere with its dual sport platform. A new Z-Force IPM motor (internal permanent magnet motor) offers simplicity, durability and better performance with sustained tough driving style. And that's not all: the company is introducing the Charge Tank, a fast-charging option that makes it possible to use the increasingly spreading public Level 2 charging stations and reduce charging time to two to three hours. 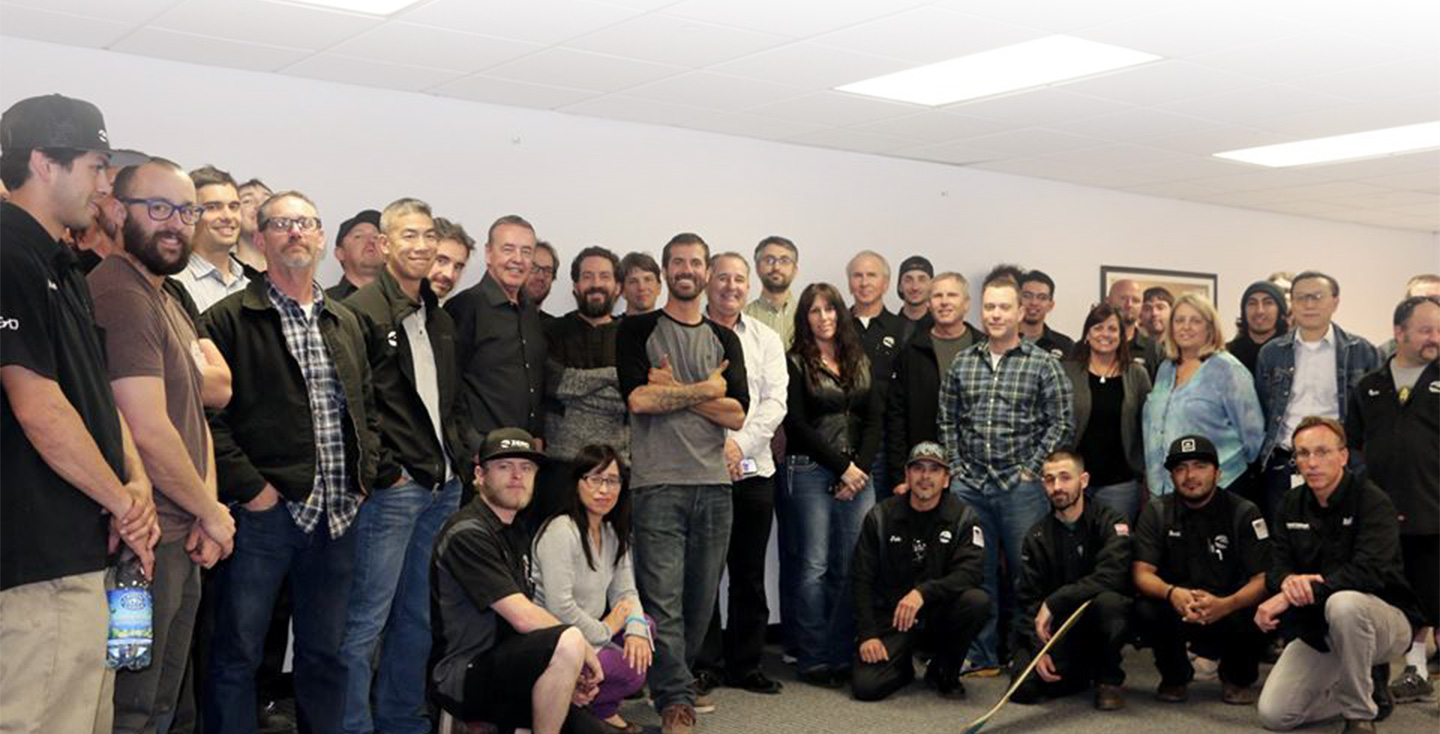 Skateboarding legend Bob Burnquist, the most successful X-Games athlete in history, visits the Zero Motorcycles factory and purchases two Zero motorcycles for personal use on the streets and slopes near his home in southern California. "This is the future," says Bob in a video he is involved in producing. “You can start now or be the last to jump on the wagon. In the end, everyone is electric. " 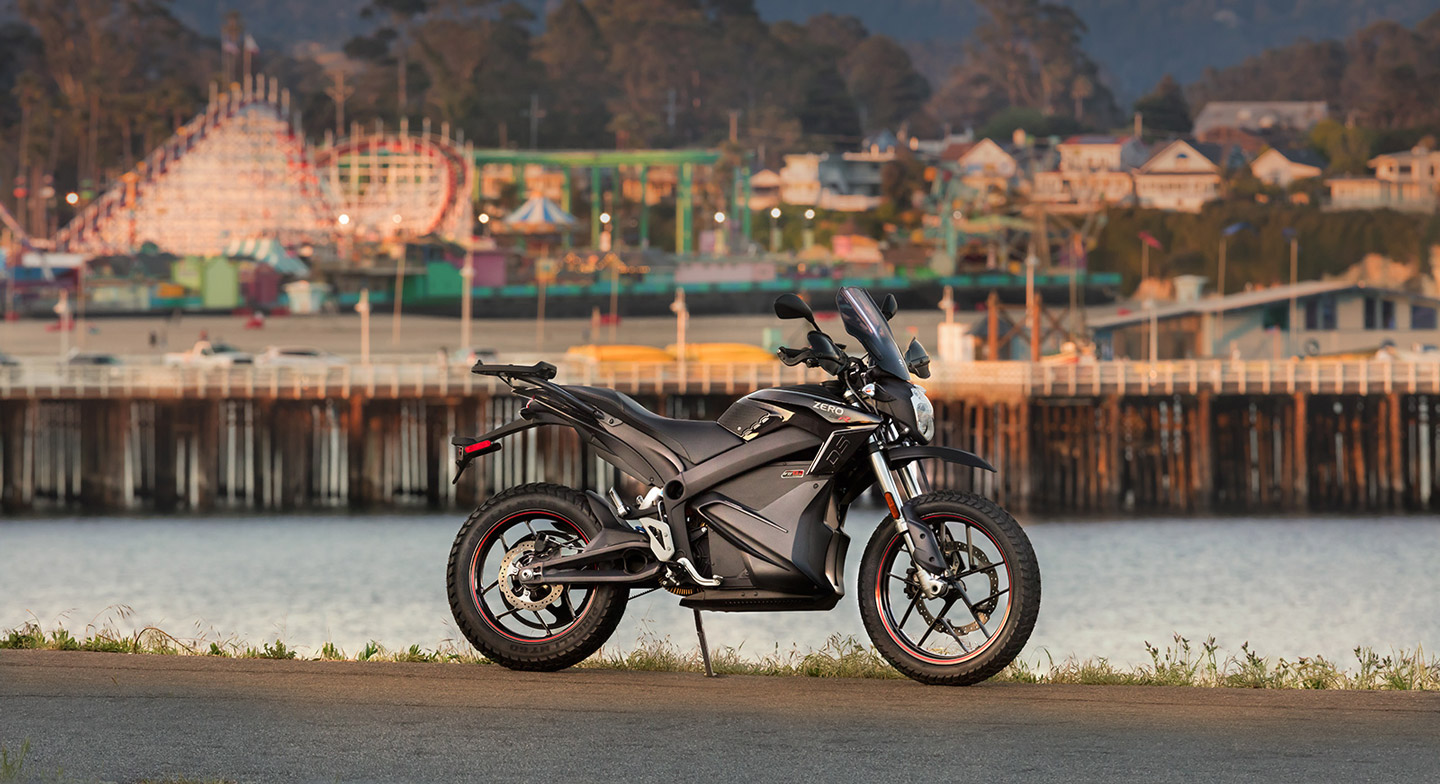