What is a prelude in classical music

How to learn to love Rammstein: Tour kick-off in Gelsenkirchen

I have been the presenter and producer of a radio program for Deutsche Welle with classical music for decades. So I have repeatedly dealt with the term "cultural export from Germany". Beethoven and Bach are important protagonists here. The band Rammstein is one of Germany's most successful cultural exports. By the beginning of 2018, the band's 20 million records were sold over the counter.

What is the band about? Reason enough to make a pilgrimage to one of their concerts. But not just any concert: It was the start of their European stadium tour in Gelsenkirchen's Veltins-Arena on May 27th. 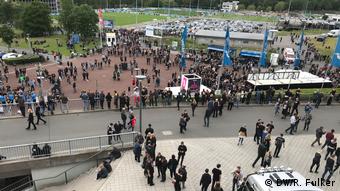 Noticeably a lot of black in the audience

The new album entitled "Rammstein" was released ten days earlier and was sold 260,000 times in Germany within a week: it was the most successful start of the millennium. The show had already been hyped weeks before.

But what can you expect from a Rammstein concert? Spectacle, scandal, joke, fire and above all noise: so much was already known. I received an advance notice when I picked up the press card: ear plugs were enclosed with it.

Before the concert, I noticed that on this cool, cloudy evening, almost all of the visitors were dressed in black. A woman carried a blood-streaked baby doll on her back. That made me feel a little queasy. Rammstein are known for breaking taboos: necrophilia, cannibalism and incest are themes that appear in their songs. Do the fans want to break every taboo too? 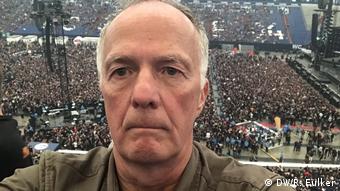 It wasn't quite that terrible in the arena with its 62,000 seats - at least seen from above, where the press representatives were housed. After a short recording of George Frideric Handel's "Fireworks Music", the preliminary program continued relatively well with the duo Jatekok from France: the classical pianists Adélaïde Panaget & Naïri Badal played pieces from the album "Rammstein - XXI - Piano". With tens of amplifications, the piano sound took on the booming, threatening effect of a typical Rammstein song. At the same time, the duo showed how beautiful the often melancholy melodies of the band are. 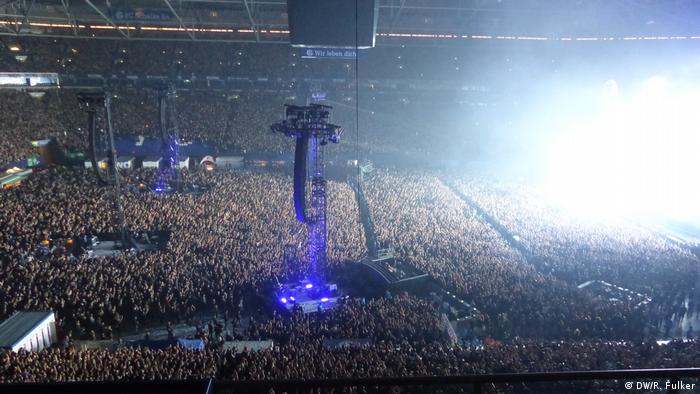 The show started - and ended - with a bang

There they are: front man Till Lindemann in a silver outfit, keyboard player Christian Lorenz in glittering gold, drummer Christoph Schneider with a bare torso, plus guitarists Paul Landers, Oliver Riedel and Richard Kruspe. "What I love", a song from the new album, sounds.

But "sound" is an inadequate term. What the band produces penetrates the core. My classically trained ears are not particularly sensitive, but I put in the earplugs to hear if it makes a difference. None. The table and chair vibrate with them, but so does my body: I ​​even perceive my internal organs, they too vibrate to the beat. 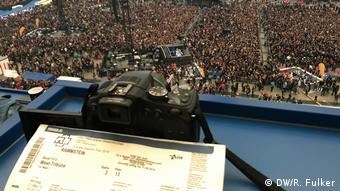 In addition, fog, spotlights and fire spread over the stage and in the arena: pillars of fire that spray up perfectly to the rhythm, designed so precisely that they look like beautiful sculptures that have disappeared in less than a second.

In addition, Till Lindemann sings or speaks perfectly understandable song texts: No wonder that Rammstein are also important mediators of the German language abroad.

New and old songs are played. "Germany", which in the video version extensively depicts 2000 years of German (war) history, is rather simply staged here on the darkened stage: the band members wear illuminated costumes that make them appear like stick figures. In the song "Doll", which says: "Then I'll tear the doll's head off," Lindemann shoots a giant stroller with a fire thrower and sets it on fire. 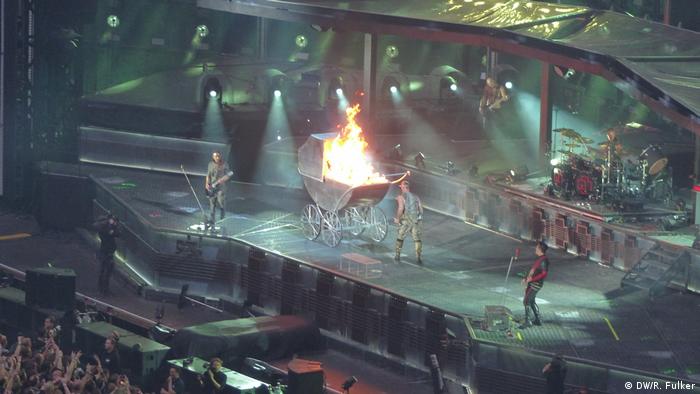 In "Mein Teil", where it says: "You are what you eat", Christian Lorenz sits in a soup pot and is literally cooked there. Instead, the song "Diamant" is sung without any lights, bangers, fire or other effects. Tens of thousands of lighters shine in the arena for "Ohne dich": They were given to every visitor at the entrance.

At some point the band members bow to the audience. But that can't be the end! It is not either. After a few minutes, the six Rammsteins appear together with the duo Jatekok on a raised platform in the middle of the arena and play "Engel", this beautiful, sad song - it was the band's first commercial hit in 1997. Then the Musicians individually in inflatables, one for each and are carried back to the stage on hands by the audience.

The encores make up a significant part of the show before Lindemann shoots soap bubbles at the audience with a cannon and the band members take an elevator upstairs. Then another bang. After two and a half hours, the show is clearly over. 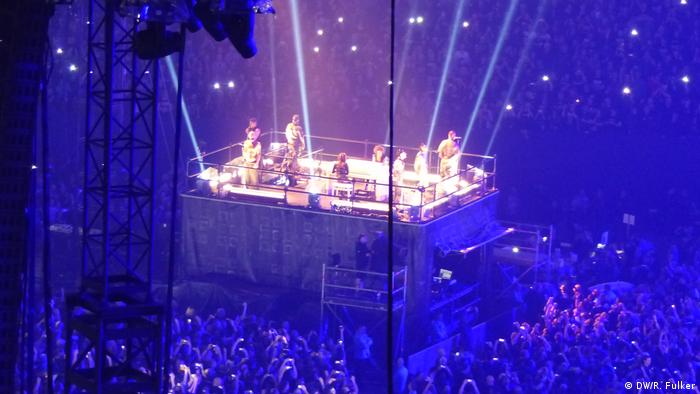 Rammstein and Jatekok seem to float in the arena - like "angels"

The show has to be

Rammstein's works, although not very different stylistically, contain bewitching melodies and harmonies that go to the heart. I've always said that these guys could only have come from the culture that brought forth Bach, Beethoven and Mozart. Often their works are epic in size.

The themes they set depict life as it is - even if the dark and disturbing comes to the fore much more clearly than with other bands of the so-called "New German Hardness". Rammstein has to take severe criticism again and again. Still, I don't think the band is about breaking taboos as such. The boys play with clichés, present them to the audience, are sometimes misunderstood, stimulate debates - and please or displease on different levels. Art. Like me, you can access Rammstein through music. But to really understand the phenomenon, you have to be on the show. However, probably not until the next tour, because this tour, which will last until August 22nd, is largely sold out. There are still tickets for the concerts in Milton Keynes, in the UK, in Riga, St. Petersburg and for the two concerts in Vienna.