What does inner sovereignty mean

Probably everyone envies people who exude sovereignty. Who appear self-confident and relaxed without appearing arrogant or know-it-all. A confident, self-assured demeanor should not be underestimated, especially at work. It can be crucial when it comes to convincing a prospect and getting an assignment.

In any case, sovereignty is a success criterion - a sovereign person will always appear more convincing to others than a person who appears rushed, insecure and haphazard. The more important the questions: (How) can one learn sovereignty? And: What can I do to appear confident? We will show you which exercises you can use to exude a confident demeanor and sovereignty ... 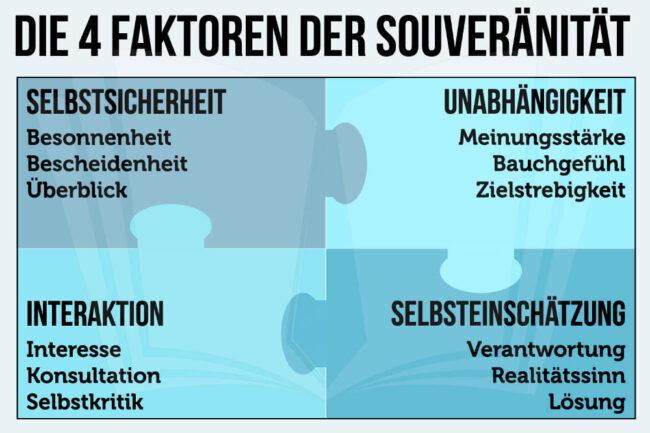 Sovereignty: What is a sovereign person?

The term sovereignty comes from the French of “souveraineté”, which in turn is derived from the Middle Latin “superanus” and means “above, superior”. We know sovereignty in relation to states, that a state is independent of the influence of other states. Similarly, with humans, sovereignty means that someone acts independently and independently. A synonym for sovereignty is used depending on the context of autonomy, control or independence. These terms are all related in terms of content and paint the image of a person who exudes personal sovereignty.

A sovereign person is more than someone who acts independently and independently. This may also apply to loners, for example. Rather, a sovereign person exudes a certain habitus. Sovereignty arises from an interplay of behavior and action on the one hand, and the resulting effect on people on the other.

What is a confident demeanor?

How a person appears and is perceived by others makes them appear more or less confident. The evaluation of situations also plays a role: If a situation is perceived as particularly challenging for someone, for example, that person will perceive someone else to be confident who (surprisingly) copes with the situation well. There are essentially four factors that make up sovereignty:

Sovereign people are characterized by being prudent in situations that others perceive as critical or stressful. To a certain extent, they rest in themselves and can thus keep track of things. They have a feeling of self-assurance and self-confidence, which on the one hand gives them the certainty that they can solve problems. This means that they are not plagued by self-doubt and yet have enough humility not to appear arrogant.

This sovereignty is also shown in the fact that such people form their own opinion. They resist the herd instinct and trust their gut instinct. This sometimes makes them unpopular, but that doesn't bother a self-confident person, because they don't have to be everyone's favorite. You will not let yourself be dissuaded from your goal or provoked by other people.

Sovereign people have a realistic self-image. They are aware of their abilities and can assess them objectively. If you make mistakes, then you stand by it and take responsibility. Instead of blaming others, they proceed in a solution-oriented manner.

With all this, sovereign people are not arrogant or aloof, but rather take an interest in their fellow human beings. A confident demeanor is particularly evident when dealing with other people, in everyday situations. They are smart enough to listen to others and to seek advice when they don't know something. Since they are sure of themselves, this is not an admission of weakness for them.

Here is a brief overview of the characteristics that people with sovereignty have:

Because of their (healthy) self-esteem, some characteristics of a sovereign person are misinterpreted by others. What it is not:

Yes, there is also that. This phenomenon even has its own acronym and is also known as SABTA: Confident appearance with total ignorance. Such people are known as blenders. They easily manage to hide their ignorance behind charms and empty phrases. If that doesn't work, they resort to rhetorical tricks. For example this:

“Look, a pink elephant!” You have certainly read or heard this joke somewhere and this is how an old trick actually works: You are asked something but do not answer the question, instead you draw attention to an area that you are familiar with. And then give a detailed answer to that.

Even with this method, you remain able to act: Your counterpart asks you about a specific issue and you answer on a much more general level.

A not very elegant option, but to a certain extent an emergency exit, is if you answer a question with a counter-question: "What would you consider important in this situation?" Meeting appear. However, it must also be said: Such tricks rarely work in the long term. If you are dealing with a well-rested counterpart, then it also knows the rhetorical tricks. True sovereignty does not rely on tricks, but also scores with real knowledge.

Even in a crisis

Some contemporaries appear very dominant, stand out with a loud voice and possibly theatrical gestures. Or they have a strong need to present their status to the outside world with as many luxury symbols as possible. However, that alone does not make a sovereign person. If you know your qualities, you don't have to rub them under the nose of others: the others perceive it that way too. Sovereignty as a personality trait is an inner attitude that is reflected externally.

Does sovereignty mean that one is superior in every situation? Rather not. There are crises that tear the rug out from under your feet. But maybe you can put it this way: confident people have a higher level of tolerance. Some people are already stressed when the projector gives up the ghost during a presentation. Or the entire technology breaks down due to a power failure. Certainly not a pleasant situation. But whoever reacts confidently to it, bridges with humor. In general, someone like that will have a spare battery in case of emergency or be able to avoid it in some other way.

In an increasingly complex world of work, in which sometimes nothing seems safe, you need a solid character. Those who know their qualities and can react to changes with the necessary calmness have the tools to cope with crises such as restructuring and unemployment. The foundation for sovereignty is laid in childhood. Those who have received little praise and encouragement, but have perhaps also been overprotected, often have a fearful character. It is different for people who have been promoted.

Women often find it difficult to perform confidently. But: personal sovereignty can be learned. It's about gaining new experience, behaving in new situations as a sovereign person would. Of course, that means working on yourself: thinking, possibly adjusting and curbing your own temperament. Hustle and bustle and excitement only cause the mood to be carried over to your colleagues. But that's not how you demonstrate sovereignty. So here are six steps you can take to learn sovereignty:

Make a resolution to become more confident. This includes the determination and the firm will to behave in a new way in a situation, namely as people do who you admire for their sovereignty. Above all, this means that you will stand up for your interests more strongly in the future.

Back in school, you could easily be underwhelmed. And many a colleague may have bullying qualities and take their mood out on you. Not anymore from now on. Show resistance in conflict situations, do not allow yourself to be pushed into the role of victim. Stay calm - even if it is difficult and seething inside.

By not flinching or making similar gestures of submission, you are demonstrating strength and self-confidence. Eye contact signals to your counterpart that you are paying attention. They show interest and signal physical presence.

Pay attention to your posture

A sovereign person will never shuffle hunched shoulders and look down through the aisles. You also sit on the chair with your back straight and your legs next to each other. Crossed legs and crossed arms are often interpreted as a defensive position, so it is better not to do this. Use your hands when you talk. It is best to keep your hands at chest height so that you will be noticed. Gestures give your words a different weight.

Sovereignty surrounds a person like an aura. When a confident person walks into the room, he or she shows presence - a number of factors play a role. They have a corresponding posture, the vocal presence mentioned above, are individual and helpful - all of this is extremely attractive to other people.

Speak in a clear voice

Opinions differ as to whether a certain volume is absolutely necessary to show vocal presence. There are also people who speak more quietly and still seem very confident to others. The sticking point here is probably the entire appearance: someone who appears confident in all situations can also allow himself a delicate voice. Nevertheless, you can modulate your voice and speak faster, slower, louder or quieter, depending on the situation.