An Internet without URLs, without website addresses - is that really conceivable? Apparently, from Google's point of view, yes. The group is currently testing again to stop displaying URLs on the results pages of its search engine. Does Google want to make website addresses obsolete - possibly with the aim that even more users no longer go to pages directly, but go through Google's search engine? OMR examines the extent to which Google has already become a "walled garden" and summarizes voices from the industry.

It was probably a limited test that Google carried out in Germany last week: When I did a Google search in the Chrome browser while I was logged into my Google account, I did not get any URLs for several days displayed. Only navigation paths were faded in (the term “breadcrumbs” is common in the SEO scene). As some tweets on Twitter show, I wasn't the only user who felt this way. The US blog Search Engine Land reported on similar tests in the US back in October. In the meantime the test has apparently ended again; URLs are currently being displayed to me again. 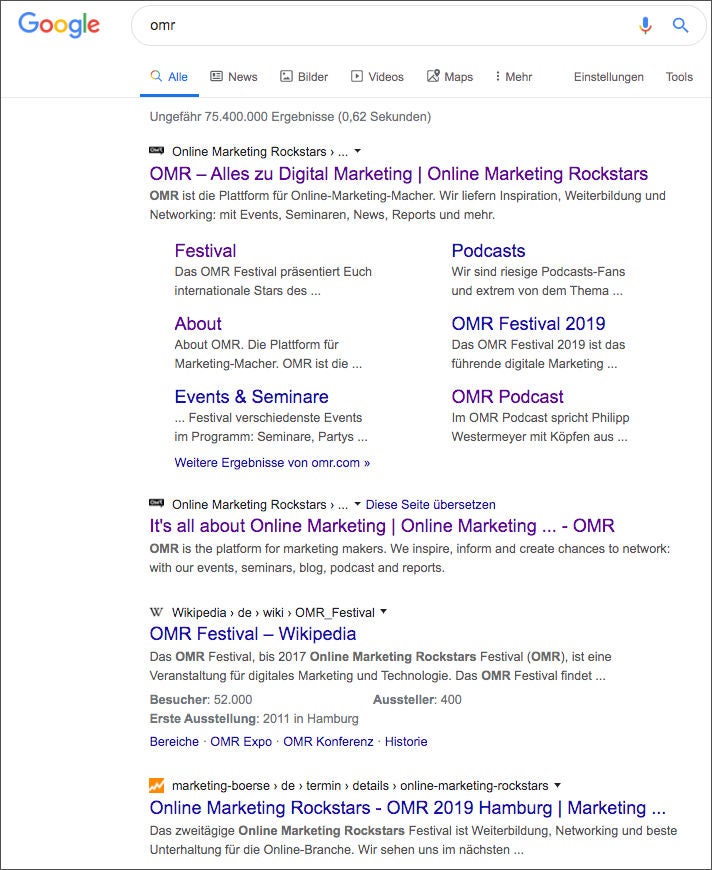 An excerpt from a screenshot of a Google search results page from the past week. It can be clearly seen that Google does not display any URLs in this case.

Google has been testing URL removal since 2013

It's not the first time that Google has tried hiding URLs in search results. According to Search Engine Land, the group was said to have carried out such an experiment as early as 2013. In the years that followed, Google repeated the tests. In 2015, the company even officially announced that it would no longer display URLs in mobile search results. A measure that the company later withdrew - only to test it again in 2017.

With Chrome, too, with almost two thirds of the market share, it is the clear market leader among browsers worldwide. In its latest version, for example, the browser hides the common URL components https and www by default. In 2014, Google experimented with a not yet officially released version of Chrome with a format called the Origin Chip. The users were only shown the main domain of the respective website (e.g. omr.com). That caused protests; after a month, Google put the feature back on hold.

Obviously, Google considers URLs to be more or less an outdated system. This is also evidenced by statements that two leading Chrome developers made to Wired in spring 2018. "People find it really difficult to understand URLs," said Adrienne Porter Felt in the article with the headline "Google wants to kill the URL". "They are difficult to read, it is difficult to see which part of them you should be able to trust, and in general I don't think URLs are a good way of conveying the identity of a page." Everyone is dissatisfied with URLs, like this Parisa Tabriz, Senior Chrome Developer at Google. "You are crap."

"I have no doubt that Google will no longer display URLs in the medium term, or at least limit their visibility to the maximum - both on the search results pages as well as within Chrome and everywhere else," says Dominik Schwarz, Chief Inbound Officer of Home To Go, a German Portal for booking holiday apartments. Schwarz is considered an expert in the SEO scene; Home To Go was one of the top 3 SEO winners in 2018 according to the SEO tool Sistrix.

"The URL will disappear from the visible Internet"

Schwarz can understand very well that the URL was booted out by Google: “Because it makes sense. Either the URLs are completely cryptic for the end user or at least nothing is learned that would not be in the title of the website - so why confuse Norbert normal users with it? ”According to Schwarz,“ the death of the URL ”is a visible part of the Webs even far beyond Google. Not only does Apple's Safari browser hide parts of the URL; When sharing links from the browser or in messaging apps like WhatsApp, hardly any end user comes into contact with the URL. “Just as the file formats of websites - we remember 'homepage.php3' - have blessed the temporal, URLs will also largely disappear from the visible realm of the Internet. All over."

Even if it is fundamentally in the interests of the end user if they no longer have to deal with cryptic URLs and can recognize whether they are currently falling victim to a phishing attempt: the question of what will or will take the place of the URL could is also an industry-political one. Because for a large number of Internet users, Google's search engine is already the main gateway to the web. Many users no longer enter URLs in the browser line, but rather a brand name and then take the detour via Google's search engine. If users will see the URL of a website even less often in the future, it is possible that even fewer users will enter the address of a website directly. The result: More traffic for Google, and thus greater marketing potential.

"The walls are getting higher"

How much users rely on Google is shown by an anecdote from 2010: When the US tech blog Readwriteweb ranked first in Google's search results for the search term “facebook login” with a report on Facebook's login function, many took it Users made angry comments under the blog article that they “want their old Facebook back”. They searched for the Facebook login page on Google and failed to understand that they had landed on another page.

“This learned behavior cannot be reversed,” believes Dominik Schwarz. “People want brands, not domains or brands. Is getfirefox.com or mozilla.org the right address if I want to download the browser? Who cares, the users want 'Firefox'. "As an online marketing maker, Schwarz is quite ambivalent about this development:" The walls around the Walled Gardens are getting taller, the monopolies stronger and the diversity smaller. "

"Is Google driving us out of our own gardens?"

In the address bar of the Chrome browser, Google partially answers users' search queries without even forwarding them to a search results page (screenshot)

In addition, Google is increasingly answering users' questions directly without forwarding them to a website. With formats such as the “Knowledge Graph”, “Featured Snippets”, “Live Results” and carousels, the group is embedding more and more content in the search results - regardless of whether it is weather, sports results or information about films, musicians or actors. In some cases, Google even answers users' questions as they enter them in the browser line.

The SEO tool provider MOZ published in its blog last year under the title “Are we being driven out of our own digital backyards?” An impressive overview of the features with which Google integrates content on its own site, due to its size alone. The result? According to a study from last August, less than 50 percent of Google searches result in a click on an external website. The study examined the web traffic of allegedly 100 million devices on which the Avast antivirus program is installed.

The example of “Celebrity Net Worth” shows what dramatic consequences it can have for websites if Google displays the same information directly in the search results. The creators of the site reported to “The Outline” in 2017 that their traffic dropped by 65 percent after Google displayed the information from the website's database directly in the search results - although the creators did not agree.

In the meantime, Google gives website operators the option of deactivating so-called “Featured Snippets” for individual pages. Nevertheless, the format remains a double-edged sword for website operators: If you deactivate “Featured Snippets”, you risk that a competitor will allow them and will rank in what is known as “Position 0”, i.e. above the normal search results.