What are different types of mechanics

This article is about the different types of powers. The mechanical forces are listed, which are considered the basis in physics and mechanics and are of the greatest importance in mechanical engineering.

The weight of a body is understood as the force with which the gravity acts on this body.

The greater the mass of the body, the stronger the gravitational pull of the earth. In addition, greater force is required to accelerate the larger the mass. If there is no air resistance, it happens that all bodies that are in free fall are accelerated at the same speed towards the center of the earth.

The value of the weight FG, which acts on a body of mass by means of the gravitational pull of the planet, is proportional to the acceleration due to gravity g.

Weight force on a body of mass m

From the general law of gravitation it can be deduced that the following approximately applies to the spatial factor on the earth's surface: g = 9.81 N / kg

If you enlarge polished surfaces, even these look like a kind of mountain range with numerous elevations and sharp peaks. As soon as bodies adhere to one another, their respective tips hook into one another. Therefore, the attempt to move them against each other deforms these tips - so stronger tensile force counteracts even stronger adhesive friction force.
The more two bodies are pressed together, the greater the maximum possible static friction.

The constant of proportionality is called the coefficient of static friction µH. This depends on the material and surface properties of the respective body.

When two bodies move against each other, their rough surfaces only rub on top of each other. In contrast to static friction, the bodies do not completely interlock here.

The sliding friction force FR, sliding is - like the static friction force - dependent on the pressing normal force F.N (mostly the weight) as well as the surface properties of the respective body. 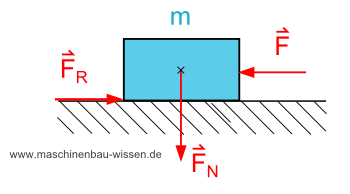 When can uneven surfaces be overcome much more easily? Then when one body rolls on top of the other. With the same compressive force or the weight force, the rolling friction force is significantly smaller than the sliding friction force. 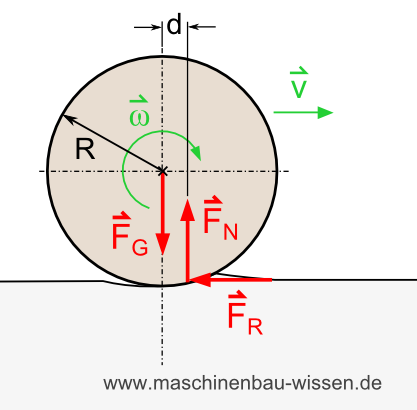 When a body moves through a gaseous or liquid medium, it always has to overcome a flow resistance such as water or air resistance. The size of the drag force is influenced by the density ρ of the medium that the body traverses, its cross-sectional area, the square of its speed v2, but also the so-called "drag coefficient" cw, which quantifies how the respective body shape affects.

For example, if you compress an elastic body like a helical spring or pull it apart, an opposing force acts in this spring: This force tries to shape the spring in the direction of its original length.

The helical spring is thus compressed or stretched by a distance s. The further this distance s, the stronger the restoring clamping force FS. the coil spring.

The spring constant k is dependent on both the shape and the material of the helical spring - or of the elastic body. 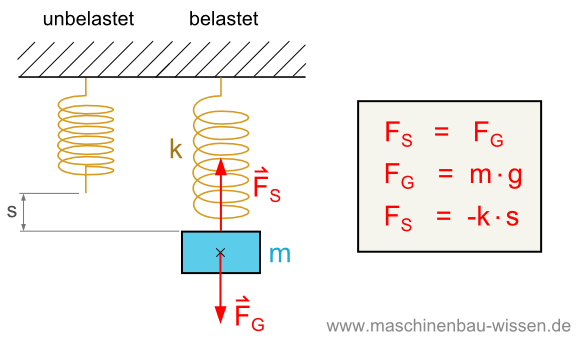 Because of its mass, a body always moves in a straight line, provided that no force acts on it. From this it follows that a circular movement can only be realized if a body is held on a circular path by a force which accelerates it continuously towards the center of the circle. The name of this force: radial force or centripetal force. 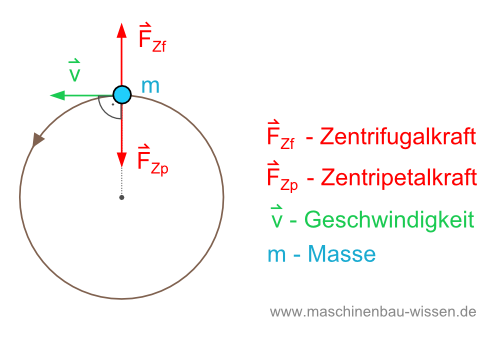 More details on the calculation of the various mechanical forces and types of force.