Ceramic is stronger than glass

What is the difference between ceramic and porcelain? 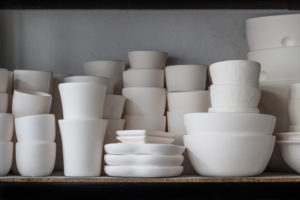 If you briefly compare cups made of porcelain and ceramic with one another, they look the same at first. No wonder, both belong to the fine ceramics family. Some use the two terms synonymously, but they have different characteristics. We explain the difference between ceramics and porcelain.

Porcelain is a special subspecies of ceramics. It is considered the nobler product and also has other components than ceramic. But what exactly do these two terms mean?

The term ceramic is derived from the ancient Greek word “keramos” and stands for clay, from which objects can be made after firing. The technical jargon speaks of a material that is divided into the four categories of earthenware, for example terracotta, stoneware, earthenware and porcelain. The production of ceramics with clay as the main component is considered to be one of the oldest human working techniques.

Porcelain is divided into two groups, hard and soft porcelain. Hard-paste porcelain has a significantly higher proportion of kaolin than soft-paste porcelain. It also requires much higher firing temperatures than the "soft" version. Significant differences between ceramics and the porcelain subcategory will be explained in more detail later. 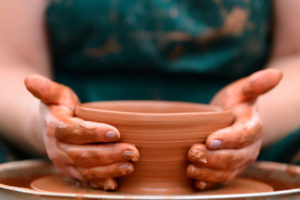 During excavations in China, archaeologists found porcelain that probably dates from the 16th or 17th century BC! The wine vessel with yellow glaze and fine relief band shows that the Chinese were able to produce thin-walled porcelain as early as 3000 years ago. During the Ming Dynasty between the 14th and 17th centuries, they produced the "white gold" of the highest quality.

Europe followed suit with porcelain production in the late Renaissance. In 1708 Johann Friedrich Böttger and Ehrenfried Walther von Tschirnhaus succeeded in producing the first European hard-paste porcelain in the Dresden Jungfernbastei. After Tschirnhaus's death, Böttger further developed the process and the first European porcelain production facility was established on Albrechtsburg Castle in Meißen as early as 1710. Vienna and the Italian Capodimonte followed.

The differences between porcelain and ceramics

The main component of ceramics is clay, in porcelain it is kaolin. Ceramic products are made from plastic clays and non-plastic materials such as quartz, chalk, feldspars and others. In contrast, porcelain consists of kaolin, feldspar and quartz. Kaolin, also known as "china clay", is a very fine, white stone with no iron content. This is how porcelain becomes translucent. This leads to a very special look and thus to the use for noble products. 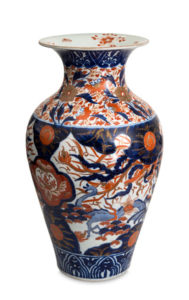 2. Firing temperatures for porcelain or ceramics

The firing process includes two runs in which the temperatures vary greatly depending on the product. The first time the porcelain “burns” at 900 ° C to 950 ° C, ceramic between 1100 ° C and 1300 ° C. The second and therefore final firing process for porcelain is the smooth firing with complete sintering at 1300 ° C to 1400 ° C. The glaze firing of ceramics takes place between 900 ° C and 1200 ° C.
The differences are partly in the kaolin clay, whose higher melting point is around 1450 ° C. During the firing process, the field chip content of the porcelain melts and does not crystallize again when it cools down. This particular detail means that some porcelain objects have a thin wall thickness and an almost transparent look.

3. The glaze of porcelain and ceramics

Since porcelain is already white thanks to its materials, it is then only coated with a clear glaze. This creates a reflective effect. Ceramic gets a thin glass coating. This can be colored, opaque, glossy, transparent, matt or even semi-matt. The glaze makes the porous product waterproof. In addition, the surface can be easily cleaned and also decorated

4. The look of porcelain and ceramics

Porcelain is a more noble material than clay. Porcelain figurines have a fine and fragile look, ceramics a more massive one. In addition, porcelain appears slightly transparent with an aesthetic shimmer when it is held up to light. Another visual difference lies in the design. Uncolored porcelain also looks pure white, while ceramics usually have a reddish clay color and are therefore often glazed.

Porcelain or ceramic dishes - which is better?

Porcelain dishes not only look particularly chic, they are also very light - and expensive. Many porcelain owners only take this out of the closet on special occasions. Often there is the normal dinner mostly from a ceramic plate. It's not that expensive, but it can also break faster.

Care instructions for your dishes 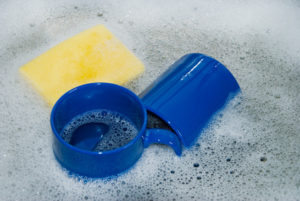 Fine porcelain, especially those with decorations, are not dishwasher-safe. Metal abrasions from the cutlery or receipts can form. Therefore, you only need to gently wipe the porcelain surface with damp salt. Another easy option is to use a soft brush and a little washing-up liquid to remove light dirt. Special cleaning agents for porcelain can also help with heavier soiling. Be careful not to rub too hard, however.

Disposal of ceramics or porcelain

Do not just throw the remains of the precious figure or the broken coffee mug in the trash. Small amounts such as a broken handle can be disposed of in the residual waste bin, large pieces have to be taken to the recycling center.
You can also try to sell fine individual pieces made of porcelain at the flea market or with a classified ad. A leftover cup from the beautiful service is usually too good to just throw it away.