Who is Fatimah bint Muhammad

.Books on Islamic topics can be found in the Eslamica Publishing House.

Fatima (a.) Is the wife of Imam Ali (a.) And mother of Imam Hasan (a.), Imam Husain (a.), Zaynab Kubra (a.) And Umm Kulthum (a.). Together with Asia (a.), Maria (a.) And Chadidscha (a.), She is one of the four best women mentioned in the Holy Qur'an, and is also their princess. In Islam she is considered the best of all women. Sura 108 (the abundance of good) is dedicated to her.

Fatima (a.) Is the link between prophethood and Imamat and a member of the Ahl-ul-Bait (a.).

The entire career of Fatima (a.) Was extraordinary and unique. Prophet Muhammad (s) had to fast for 40 days before they were conceived. As the birth approached, Khadijah (a.), Who was around 48 years old at the time, had to give up hope of the support of her former friends from the Quraish tribe, as they boycotted Islam. According to Islamic beliefs, angels and women came down to her from heavenly, paradisiacal spheres and stood by her. According to some traditions, St. Mary (a.) Was also present. According to one tradition, ALLAH determined her name "Fatima" and Prophet Muhammad (s.) Declared that her name means that she and her followers are kept away from evil and from hell.

Scholars have different views on the date of their birth. Shiite scholars generally state that she was born on a Friday, the 20th Jumada al-Uchra, in the year 5 after her calling (i.e. 8 BC). Sunnis, on the other hand, sometimes claim that she was born before the calling. See dispute about Fatima's birthday (a.).

Fatima (a.) Has countless surnames, of which at least nine are particularly well-known: The true [as-siddiqah], the blessed [al-mubaraka], the pure [at-tahirah], the humble [az-zakiyah], whose face is brightly illuminated (see: az-Zahra), the flower [batul]. For further names see: List of the Titles of Fatima (a.).

In some traditions it is said: "She is the first woman to go to paradise."Prophet Muhammad (s.) Says: "Fatima's satisfaction is my satisfaction; her anger is my anger. Whoever loves Fatima loves me, whoever pleases her makes me happy; who annoys her annoys me." (see also Sahih from Buchari B. 2)

Prophet Muhammad (s.) Says: "Fatima is part of me, who annoys her annoys me."

As a small child, Fatima (a.) Endured the difficulties of the boycott against Muslims and also lost her mother Khadijah (a.) During the difficult years. She tried to make up for the loss for her father as much as possible by taking on all of her social responsibilities and taking care of the widowed prophet's household. Therefore she was also called "mother of her father". For their upbringing, Prophet Muhammad (s.) Married Umm Salama. 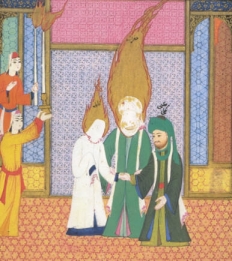 A few years after the emigration, Imam Ali (a.) Married Fatima (a.). Fatima (a.) Devoted the following years to the upbringing of her now-born children, who were to become the heroes of Islam. Only two of their children were there on Ashura day. She was supported in her work by Maimuna Fidha. Well-known events of the time include the three days of fasting and the event around Fatima's necklace (a.). Fatima often accompanied the Muslims to the defensive battles to act as a nurse. The places of her devotion during this activity were honored in retrospect, e.g. Fatima's (a.) Niche at the battle of the trenches.

Fatima (a.) Experienced the death of her father full of sadness. The scene in which the Prophet Muhammad (s.) Whispers something in her ear shortly before his death is well known, and she shines with joy. When asked what they were happy about, she replies that she learned from her father that she will be the first of the Ahl-ul-Bait (a.) To follow him.

After the death of her father, she was only a few months (95 days according to some traditions) in this world. During this time she experienced the injustice that befell her husband and clearly complained against it in a public speech against her adversaries.

To comfort her, Imam Ali (a.) Wrote a work for Fatima (a.) During this time. It was called the book of Fatima [mushaf fatima] by their pure sons. Shiites believe that Imam Mahdi (a.) Has it with him. Parts of it were published as "Sahifat-ul-Fatimiya". 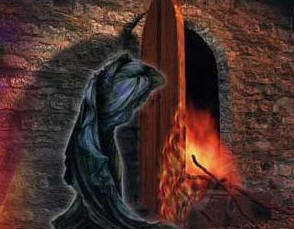 She died on the 3rd Jumada al-Uchra in 11 A.D. (according to other traditions a, 10th Jumada al-Uchra or 13th Jumada al-Ula) as a result of the serious injury that she sustained heavily pregnant when she closed the front door before the intrusion of Abu Bakr and Umar ibn Chattab and the The door was forcibly slammed open and a fire was started. She had lost her child Muhsin, heavily pregnant. They wanted to force Imam Ali (a.) To take an oath of allegiance. These events are especially commemorated during the Fatima (a.) Days of mourning.

She had already been expropriated by Abu Bakr, who took away the Fadak land from her. It was not until the Umayyad caliph Umar ibn Abdul Aziz that Fadak was given back to her descendants, at least for a short time.

In her will, Fatima (a.) Asked Imam Ali (a.) To carry her body to the grave in a bier at night so that no one sees her and her grave remains unknown, so that Abu Bakr and Umar ibn Chattab never look at her Grave can come. Therefore, she is the only great figure in early Islamic history whose tomb is unknown. See also Fatima's (a.) Grave.

Shiites believe that Imam Mahdi (a.) Knows the tomb and will tell his followers when he appears. Some scholars believe that she was the first Muslim woman to be brought to the grave in a kind of coffin.

In Portugal there is a place that bears her name and is one of the most famous places of pilgrimage for Catholic Christians, because there Saint Mary (a.) Is said to have appeared to three children and given them several prophecies.

Fatima (a.) Was also a narrator [rawi], whereby numerous collectors of narrations [hadith] neglected her person. A well-known tradition [hadith] is among others:

"Whoever sends (his) worship (prayers) in pure (form) up to God, the mighty and glorious God will send down better things as His favor".

Shortly after the passing of Prophet Muhammad (s.) She (a.) Appeared in the mosque in Medina and said:

“And give thanks to Him (Allah) for His greatness and light. Everyone on earth and in the heavens is looking for means / intercessors to Him and we (Ahl-ul-Bait) are the means / intercessors among his people, and we are His chosen ones and those with the special position to Him, and we is His hidden evidence and we are the heirs of His prophets ”.

Fatima (a.) Has reached the level of advocate. And everyone who prays for them will be rewarded for it. Fatima (a.) Says:

"The Prophet said to me: O Fatima, if someone asks for a blessing (from God) for you, God will forgive him and send him to me in Paradise, wherever I am".

The Islamische Weg e.V. was the first association in the 1990s that composed a German-language song on the subject, wrote the lyrics and published it on audio cassettes that were common at the time.