Is Warangal a safe city

Widows in India The curse of dead husbands

Every third widow in India attempts suicide. Because widows are often expelled from their community there. Participation in social life is forbidden to them after the death of their husband. Add to this the harassment and violence from the man's family, there seems to be enough reason to end his life prematurely. But where does this superstition and the negative image of women come from, who after losing their spouse only experience alienation instead of support? Five women from the Indian states of Telangana and Andhra Pradesh can tell of experiences with the taboo status of widows - and how they began to fight against it.

In many parts of India women are perceived as second class citizens, the property of men and their families. Girls have little chance of education and skills development, and the prospects of entrepreneurship, land ownership and financial independence are virtually nil. Due to the lack of clean water and poor sanitation in a country of over a billion people, girls' dignity is often trampled at a young age, not to mention the stigma of menstruation.

Half of Indian women are illiterate, and half marry well before the age of 18. Your job is to give birth to a son and take care of the household. That is, about the husband. When the head of the family dies, the young widow's life seems to be over too. This is due to persistent superstition and the fact that widows are taboo, and not just in rural communities. And the caste system makes the situation even worse. After losing her husband, a woman has to remove the "bindi", the orange point above the bridge of the nose, from her forehead, remove the flowers from her hair and remove the traditional bangles from her wrists by hitting a wall. Without this jewelry, however, it is immediately obvious to everyone that she is a widow. And there is exclusion. 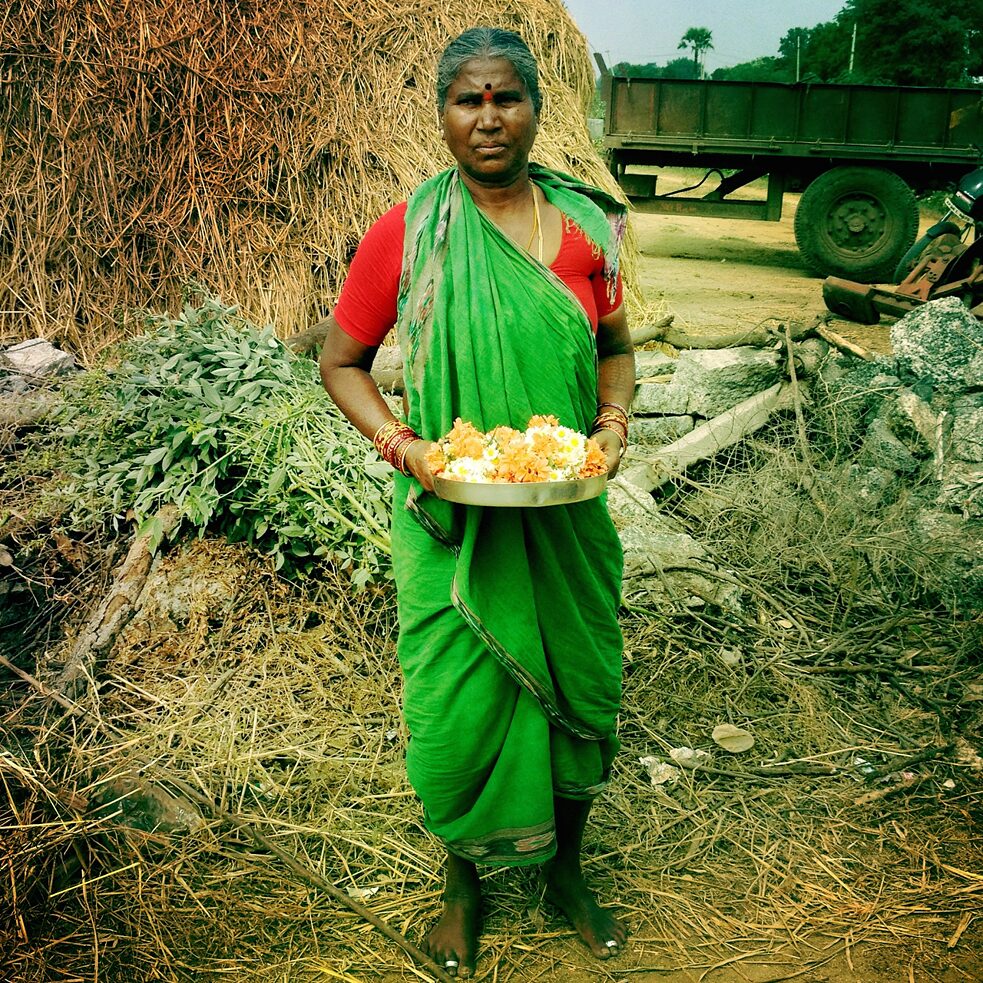 Adorning oneself with flowers, bangles and bindi is important for many Indian women. | Photo: © Boba Markovič Baluchová

Arranged marriages at a young age

It's hard to tell if this comes from the Hindu religion or if it is more of stubborn traditions, but shameful superstitions and myths still linger about women who have lost their husbands, especially in rural areas. For example, if you go to work in the morning and see a widow on the way, you lower your eyes and quickly go back home to cover the distance again and avoid possible misfortune.

The young Sowjanya from the Bandoutapuram community experienced this feeling of exclusion from the community first-hand. She married at 13, gave birth to twins at 15, and by the time she was 20 she had three children - all of them daughters. A year later she became a widow. Although she was still young, she was no longer allowed to wear modern clothes or jewelry and make-up. Her husband's family took the house away from her because she doesn't need it if her daughters get married and move into other houses. Sowjanya wanted to kill herself, but could not bring herself to leave her three daughters to fate, as they would have been even worse off as orphans.

The story of Komala from Bandoutapuram sounds very similar. She married when she was 12, but four years later her husband contracted tuberculosis and died. And although her in-laws died of the same disease, the Komala family accused of beingwitched their husband. The sisters-in-law dropped her, no one helped her, on the contrary, they wanted to take her house away too. They spread false rumors about them in the community and every rickshaw or bus ride became a nightmare as people looked down on them from above.

Sandhya from the village of Panthini also experienced something like this. She married very young and after losing her mother, she found support from her husband. However, he also died and she no longer saw any meaning in life. But she had to take care of her sons and grandparents. She threw herself into work, which is why people around her accused her of working three months after her husband's death and not grieving properly. When she was granted a widow's pension in the city, there was gossip in the village that she had committed fornication with an official for it. 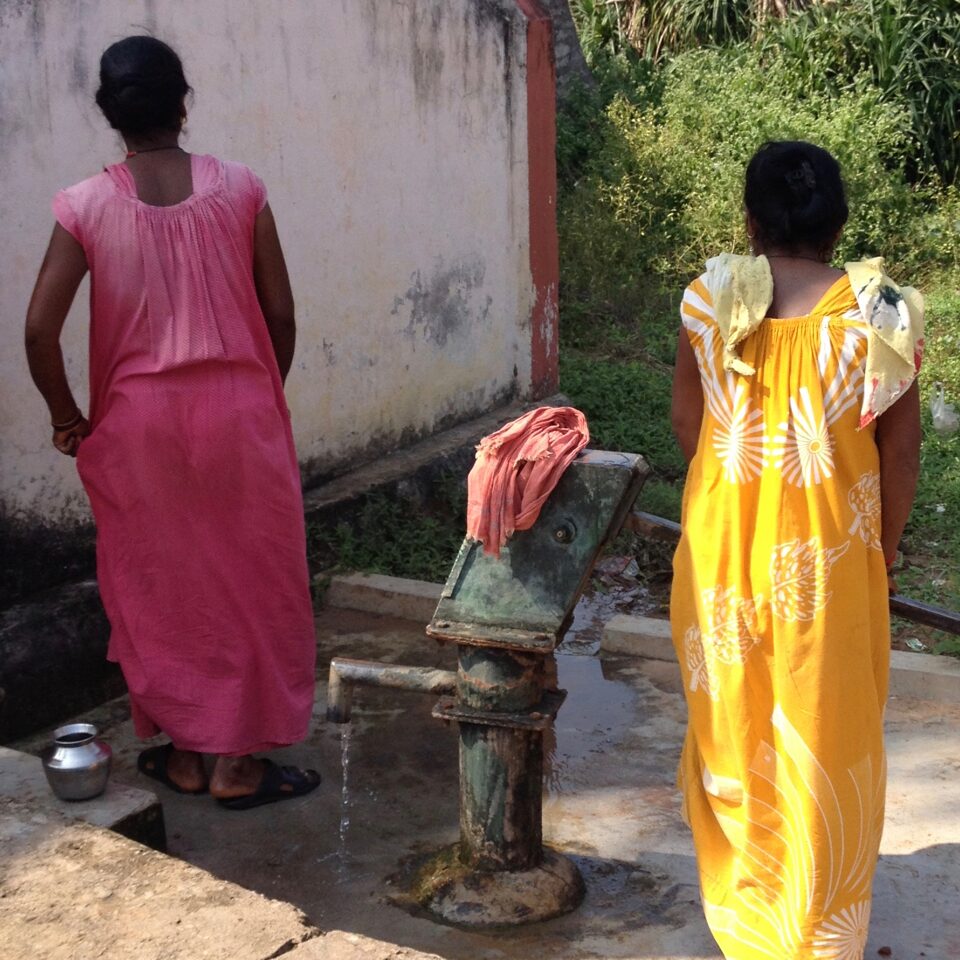 Stories with a bad beginning and a happy ending

Many more similar life stories could be told. However, the related questions are important: Is a widowed woman no longer human? What sin has she committed that everyone turns their back on? Why is the family attacking and vilifying them? Why should she atone for her husband's death? Why does she have to suffer a double trauma - the loss of her partner and her human dignity? Without bearing any guilt, widows become socially marginalized and lead hard lives. However, Indira Gandhi, India's first female prime minister, was also a widow for 20 years.

Fortunately, these stories of severely tested young widows can have a happy ending, which can be seen not only in Sandhya, Komala, and Sowjanya, but also Nirmala and Ahalya from Danthalapally. After her husband's death in 2005, the Ahalya family forbade attending cultural or religious events and they could not even bless their own brother at his wedding. Intolerable pressure and sexual harassment directly in the family resulted in her attempting to douse herself with kerosene and set fire to it.

Fortunately, at the height of her suffering, Ahalya, like the other women already mentioned, learned of the activities of the local NGO Bala Vikasa, which is currently caring for widows. When she wanted to join one of the women's groups that ultimately saved her, her mother had to pay the fee of fifty rupees, or half a euro, for her. She didn't even own that much. “At local widows' meetings, we advise each other on how to raise children and become independent. Thanks to the sewing course, I can earn a living and something more. ”Finally she even dared to wear the bangles on her wrists, the“ bindi ”on her forehead and flowers in her hair.

Nirmala's parents, like many others in the area, were illiterate and poor, so they arranged for their daughter to marry a relative when she was 11 years old. At 21 she already had four children, the first three were girls and her in-laws forced her to become pregnant until male offspring were born. However, after Nirmala's husband was killed in a car accident, her relatives only gave her a room in the house and did not care for her. Only a child's scream kept her from burning herself. 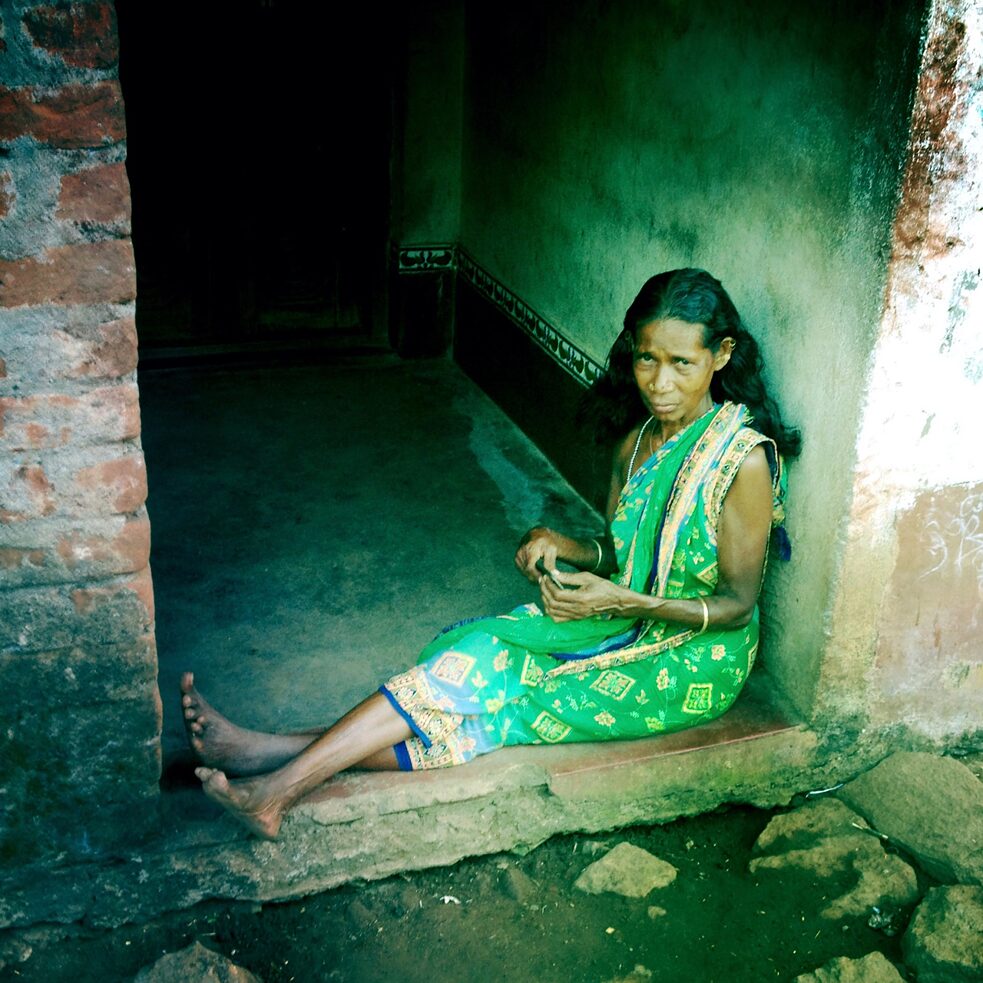 The exclusion of widows is exacerbated by the corona crisis

Today Nirmala works as a cleaner in a school and earns the equivalent of around 50 euros a month. She still regularly attends the meetings of the self-help group for young widows organized by the NGO Bala Vikasa. Thanks to her educational seminars, she learned how to manage money and even helps poor orphans in her village. Last year she was able to afford to donate one hundred rupees (just over one euro) to charity. “When we have nothing to eat at home, I explain to my children that the orphans around us suffer even more - they have nothing and no one. My children at least have me as a loving mother. It makes us really happy to be able to give something to our neighbors. "

However, the Covid-19 pandemic has made widows' lives a lot more difficult. As part of the measures, it was necessary to distance oneself from other social groups outside of one's own family. That wouldn't be such a big problem if these women weren't already experiencing so much marginalization anyway. And since state schools were closed, the children of widowed mothers no longer have access to the lunches they receive under the Mid-Day-Meal program according to a state regulation. The main motivation of many (not only orphaned) boys and girls for going to school is less the thirst for knowledge than the possibility of being able to satisfy actual hunger with a warm meal at least once a day. It is extremely difficult for widows in rural areas to provide enough food for their children. And here, too, the organization Bala Vikasa comes into play, which supplies young widows affected by poverty in the countryside with basic food.

The non-governmental organization is based in the district capital Warangal, 150 kilometers northeast of Hyderabad. To help local rural communities fight poverty, it was founded thirty years ago by an Indo-Canadian couple who then became aware of the widows. A survey in their workshops showed that every third widow in the states of Telangana and Andhra Pradesh tries to commit suicide. That is why the organization launched a program to empower women and especially young widows. 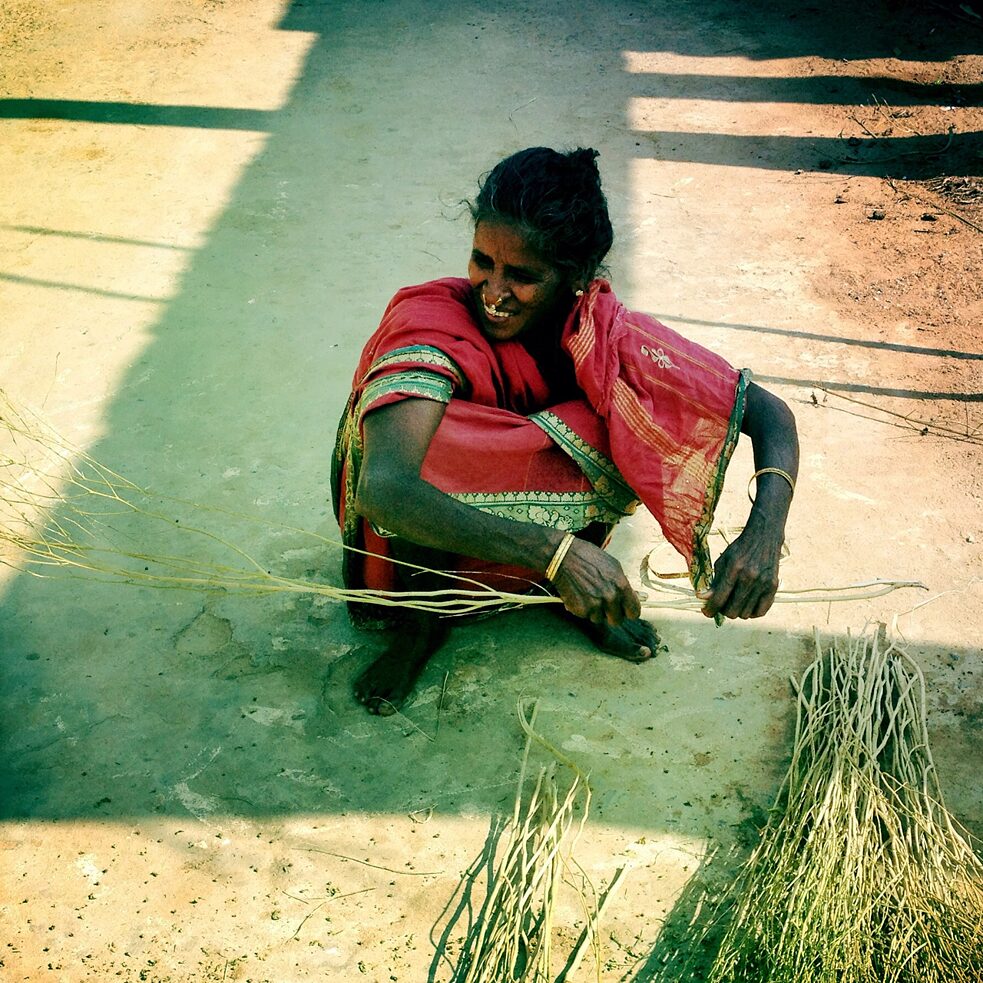 From local initiative to social revolution

The “Young Widow Training” seminars offer women psychological counseling, they help them to regain their lost self-confidence, and they impart financial knowledge and entrepreneurial skills. So far, 15,000 women have been cared for in two states in India, a country with billions. Young widows who are open to change and education work in self-help groups not only to develop skills but also to deal with social justice, human rights and the promotion of active participation in social life. With more courage and confidence, they can then deal with possible obstacles and judgments and find work more easily.

Over the past decade, Bala Vikasa has saved the lives and changed the lives of thousands of women like Ahalya and Nirmala. Proof of this was the recent campaign to celebrate International Widows' Day on June 23rd. The way of thinking and acting is also slowly changing in individual villages. The Bala Vikasa initiative has developed into a massive social revolution that advocates equality and empowerment for widows, breaks taboos, rejects predetermined stigma and combats discrimination. Of the 500 women currently in the program, 30 have remarried, suggesting that attitudes in the community have changed.

is a Slovak journalist, university lecturer and communication manager of the Ambrela platform for development aid organizations. She worked for the UN development program as well as NGOs such as Caritas or ADRA and various Slovak universities. She publishes articles on fighting poverty and eliminating inequalities in so-called developing countries. In addition, she is committed to solutions to forced migration, the mitigation of the negative effects of climate change, for a stronger position of women in society and for community work. However, the topic of international volunteering is particularly close to her heart. More information online: Media About Development.