Is Myanmar the lawless country

The protests have not yet escalated, but the situation in Myanmar is extremely tense. The Tatmadaw, as the military is called in Myanmar, has so far mainly disrupted communication in order to make it difficult to organize protests. First Facebook was blocked, then Twitter and Instagram, before finally the internet was almost completely paralyzed. The Internet blockade was lifted on Sunday evening, but overall communication remains restricted.

In the meantime, Myanmar's state television broadcast a warning: Democracy could break if there was no discipline, according to a ticker that was displayed on MRTV during regular programs. "Legal action" should be taken against those who harm state stability, public security and the rule of law. “Outlaw evildoers” should be “eliminated”. It was the first time that the state responded publicly to the protests.

Despite all the obstacles, a large protest took place in Yangon on Sunday. As confirmed by the Reuters news agency and several local media outlets, tens of thousands of people gathered at the largest rally in the center around the Sule Pagoda, which used to be a meeting place for protests. They raised their hands in the three-finger salute, which became a symbol of resistance like in Thailand, and chanted: "We don't want a military dictatorship! We want democracy!"

The role of the monks

In other parts of the country there were also large and small protests. The situation was particularly precarious in the city of Myawaddy in the southeast, near the border with Thailand. Shots can be heard on Facebook videos, an angry crowd runs away from police officers who are firing tear gas cartridges.

There was also a demonstration on Monday: In Yangon, Buddhist monks in their saffron-colored robes sat at the head of the citizens' movement. Thousands also took to the streets in the coastal city of Dawei in the southeast and in the capital of the Kachin state in the far north. Prominent activists are calling for a nationwide general strike.

So far, the military has acted more cautiously than after the last coup in 1988 - or in 2007, when the Tatmadaw put down the so-called "saffron revolution" of the monks. Both uprisings resulted in deaths, although the number of victims is controversial. It is said to have been several thousand in 1988, between 13 (official figures) and several hundred (according to the Australian broadcaster ABC) in 2007.

"Protests are picking up speed"

In light of the Tatmadaw's violent history of cracking down on protests, historian Thant Myint-U tweeted: "The anti-coup protests are picking up speed. On the one hand, given the history, we can foresee the reaction, on the other hand, Myanmar's society is different today than in 1988 and 2007. "

Residents and experts in Yangon, with whom DW was able to speak but who do not want to be quoted for security reasons, are not very confident. They expect violent clashes between demonstrators and security forces in the coming days.

The coup and the protests coincide with the Corona crisis. The pandemic hits a weak and poorly equipped health system in Myanmar, especially in rural areas. With 141,000 confirmed cases to date and 3,168 deaths (according to Johns Hopkins University, February 7, 2021), the country is one of the moderately severely affected compared to other countries in Southeast Asia. According to the Washington think tank "Center for Strategic and International Studies" there are 2,600 cases per 100,000 inhabitants in Myanmar (for comparison: Vietnam 21, Thailand 326, Indonesia 4,235, Singapore 10,629). The numbers have recently fallen sharply, mainly due to a lockdown imposed by the National League for Democracy, Aung Sang Suu Kyi's party, in October 2020. 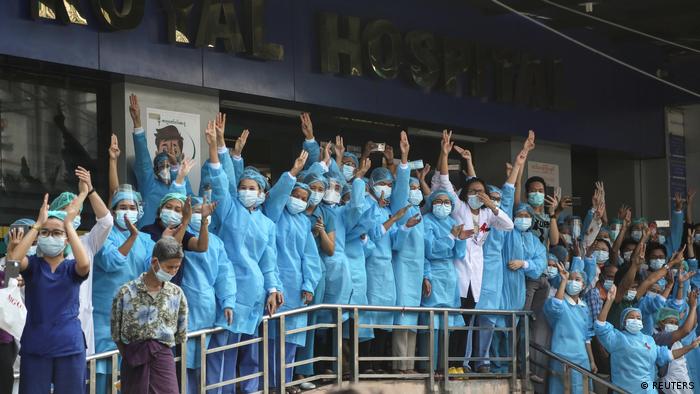 Medical personnel are involved in the protests

On the day of the coup, the health minister of the NLD, Dr. Myint Htwe, his resignation on Facebook. He also called on his co-workers to continue to serve the people. Many doctors and nurses from state hospitals took part in a civil disobedience campaign after the coup and stayed away from work.

In any case, the gatherings of thousands of people during protests favor the spread of the coronavirus. Even if there is no violent crackdown on the protests, a steep increase in corona infections and thus also in corona deaths is to be feared.

The economy on the ground

The new military government said Friday it would focus on revitalizing the economy. Factories that were closed in the wake of the lockdown should be reopened and domestic flights allowed. Appropriate hygiene measures should be taken to prevent the coronavirus from spreading. The military government leaves open what that means in concrete terms and how this should be implemented in the current state of emergency.

The pandemic has already caused serious damage to the Myanmar economy. A study by the "International Food Policy Research Institute" from November 2020 examined the impact of COVID-19 on the economy. As a result of the pandemic, there was no tourism, textile factories were closed and the lockdown deprived many day laborers of the basis of their work. The study found that income-based poverty rose from 16 percent to 63 percent between January 2020 and September 2020. Two thirds of the country's population live on less than $ 1.90 a day. 38 percent of all households in Yangon stated that they had no income in September 2020. 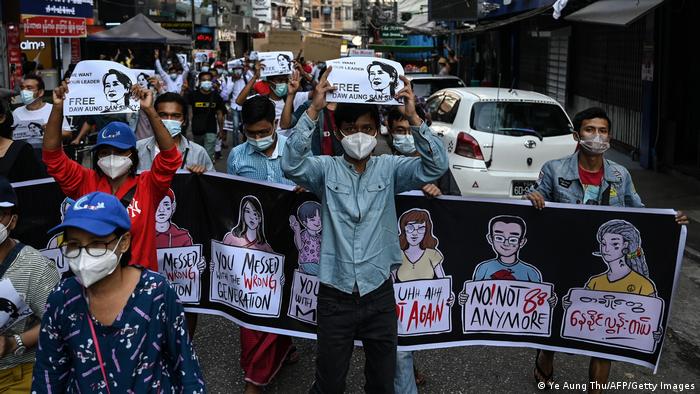 The military now wants to reopen the economy, but the coup means further restrictions on urgently needed foreign investments. The Japanese brewery Kirin (KNBWY) announced on Friday that it would withdraw from Myanmar. Further investors will follow, if not again economic sanctions will be imposed by the UN, the USA or the EU.

Here, too, the country's history shows that economic problems can fuel protests. The national crisis of 1988 with the subsequent coup was mainly due to the miserable economic situation and an unannounced devaluation of banknotes.