How did Koenig Kanishka die 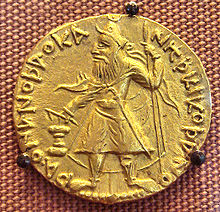 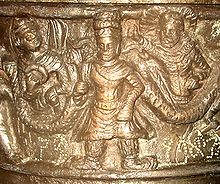 The king from the Kushana dynasty was the most important ruler of the Yuezhi or Tocharer, who established a huge empire in Bactria and Gandhara around the birth of Christ. Under Kanishka, this flourishing state reached its climax in the beginning of the second century, shaped by Iranian, Indian and Hellenistic influences and just as many gods.

However, Kanishka's exact chronology is unclear, as he and his successors used an unknown calendar in their inscriptions. His reign is therefore classified later than given above, for example from Ghirshman to 144-168 AD. At least Kanishka apparently imitated some coins of the Roman emperor Hadrian (reign 117-138), which speaks for a contemporaneity. His son Huvishka already imitated the coins of Hadrian and Antoninus Pius ’. In 1993 the Rabatak inscription was found, the content of which allows further conclusions to be drawn about him and his time.

Kanishka expanded the empire to Turkestan, Kashmir and expanded in northern India to Benares. In Turkestan he is said to have restored Kushana suzerainty. His predecessor had sent an army against their generals Ban Chao († 102) because of a failed marriage relationship with the Han in 90, but it did nothing, whereupon he decided to pay tribute. Kanishka stopped these tribute payments.

The king also paid homage to Greek, Brahmanic and Zoroastrian deities, but he gained importance above all because of the fourth great council, which he held in Kashmir (according to other opinions in Kuvana near Jalandhar). This council is considered to be the beginning of Mahayana Buddhism. The presidents were the theologian Vasumitra and the poet Ashvaghosha. Besides Buddhism, Kanishka was also close to the Mithras cult.

Tradition has it that Kanishka behaved similarly to the former King Ashoka - cruelty in youth and piety in old age. However, Kanishka was not quite as peaceful and gift-giving as Ashoka four centuries before him. The legend traces its end to a popular uprising because of a planned war campaign, he was suffocated in a sick bed.

At Peshawar, which Kanishka made its western capital and winter residence, the so-called Kanishka Stupa, a 13-story stupa, was built. It is one of the tallest structures in the world at that time. The summer residence was in understatement. At Surkh Kotal in today's Afghanistan stood a large fire temple, a sanctuary that was also dedicated to the ruler's cult.